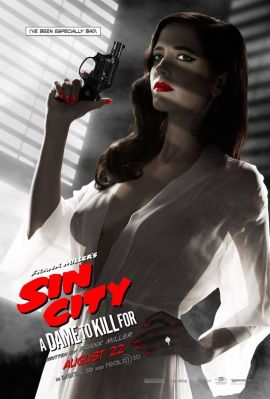 I’d completely repressed the fact that we’d done these bloody birthday series, which come complete with the added bonus of only being stopped by the reviewers’ actual death. Anyhoo, as I’m still on the unemployment train, I thought I’d have a look to see what treasures 2012, 2013, 2014 and 2015 had left for me before my imminent birthday this year. So, having briefly perused Wikipedia, I was quite pleased to see a palatable list that I’ve already (for the most part) seen and, more importantly, didn’t hate. My provisional list is: Premium Rush, You’re Next, Sinister 2 and, for 2014 and today’s entry, Sin City: A Dame to Kill For. I’ll also update the scores for the first run through after I catch up with 2016’s entry.

I quite like Robert Rodriguez’ 2005 adaptation of Frank Miller’s Sin City. I’m not really sure why, but if I had to speculate, I suppose because it’s the kind of pulpy sleazy material that tends to appeal to my tastes. It didn’t hurt that it looked great (for the time), had some very solid acting in it from a decent ensemble cast, a good smattering of boob and enough violence to offend the Geneva Convention. So, I have to say I was mildly curious when I heard they were doing a quasi-sequel to it. Unfortunately, the passage of time had not been kind, in that the original wasn’t that fresh any more (particularly not from a visuals point of view), and the public was mostly completely indifferent to the possibility of a return to Basin City. Thus, as is the way with these things, it tanked like a Sherman and I doubt that we’ll see a Sin City 3, which is a bit of a relief for reasons that will become apparent.

Clearly not the sort of girl you take home to meet the parents, for obvious reasons.

As with the first film, Sin City: A Dame to Kill For (from hereon this will now be known as SC2 as I can’t be arsed to type all that out every time and I need to use the Dame to Kill For name for its dedicated story) tells three stories in the sleazy world of Basin City where the only thing cheaper than the dames is life itself. Again, as with the first film, we’ve got a few characters that appear in all three stories, one of whom has been elevated disastrously to a far more prominent role and a few shared locations (notably Katie’s Bar). The 3 stories this time are The Long Bad Night, A Dame to Kill For, and the “new” Nancy’s Revenge. As before, the film jumps between stories (although A Dame to Kill For is allowed to play out in its entirety) and it also features a prologue (although not an epilogue). Furthermore, the stories aren’t presented chronologically, but as they’re not particularly hard to follow this, with one exception, doesn’t hurt the film. I’ll come to the exception in a minute, as it’s a bit of a major complaint (and damned lazy) that impacts both this film and the original.

Most of the cast from the original have returned, the only major exceptions are Brittany Murphy, Michael Clarke Duncan (both dead) and Clive Owen and Devon Aoki (not interested, I’d imagine), In the case of Murphy’s character, she’s written out, but Duncan is replaced by Dennis Haysbert (no real change), Owen is improved on by Josh Brolin and Aoki is also improved on by Jamie Chung. So far so good. The “new” characters and actors for the most part fit seamlessly into the world created. Overall, really, the performances are OK, with Eva Green putting in the standout noirish Femme Fatale turn as The eponymous Dame to Kill For Ava. Not only is she all sorts of hot (and filthy), but she also comes across as shrewdly manipulative and flat out evil. As an added bonus, probably the best line in the film is Dwight’s description of her taking a bath as either “a production or an act of retail”, and you know exactly what he means. It’s really a sizzling performance that in a film with more confidence wouldn’t be lost in the middle of two other lesser stories (but I digress, I’ll come to this in a minute too). It’s helped out by a feverish turn by Chris Meloni, and Brolin’s growling hard boiled delivery as mug of the day, Dwight. Aside from Green, the other stand out performance is from Powers Booth as evil Senator Roark, while Mickey Rourke seems to be having fun as Marv. Joseph Gordon-Levitt on the other hand seems to be recycling his turn from Brick, but, well, that was desperate to be Chandler in a high school so it’s at least fitting for the material. The only real failure is from Jessica Alba as Nancy, but this is mitigated by 2 factors- firstly, she’s never shown the range to perform what the story asks of her, and the character is shockingly written anyway.

Neither is this, to be honest.

It’s no secret that this film bombed at the box office, and there are a number of reasons why. I’ve already mentioned indifference, but for me, the biggest problem that it can’t overcome is that with the exception of A Dame to Kill For, the material isn’t anywhere near as strong as the stories in the first film. In an ideal world, this wouldn’t be three stories, it would have just been full length ADTKF, which of the 6 of Miller’s efforts filmed so far is the only one that’s strong enough to support a full feature length run time. As it is the majority of this film is ADTKF, with Nancy’s Revenge in particular being practically a vignette in comparison. Hell, maybe it’s the epilogue in disguise, but I don’t think so. Anyway, back to the point- SC2 strangely feels as if it lacks confidence- there’s a desperate need to shoehorn Marv into practically every story- whether or not this is appropriate (and it really isn’t in NR, as he should be dead- to the extent that it’s fucked up the timeline from the original film in my head now), and Bruce Willis’ Hartigan returns as a ghost- who also makes a key intervention. Ugh. It’s like the friend that hasn’t seen his classmates in a decade but still shows up at the 10 year reunion to lurk around the doorway. A feeling that is made worse by the elevation of Senator Roark from shadowy background figure to major player in this film. He’s now the key villain in two of the three stories, something I feel the character isn’t well drawn enough to support. Furthermore, NR actually hurts his character with his weird longing for his dead son, complete with icky “I couldn’t have bought an election and an insane asylum” speech.

Incidentally, ADTKF is far stronger material than the The Big Fat Kill in the original film. Far, far stronger and far less over the top.

Nor this. I’m starting to think that no nice people live in Basin City

Again, the film looks great, and again the Mancini-esque soundtrack fits the material perfectly, however it’s now 2014 and the CGI comic book visuals just simply don’t have the impact they had back in 2005. What looked new, cool and vibrant back then now looks tired, overused and uninspired, simply because nowadays, due to the likes of Snyder vomiting funnybook panels into every film he makes, it is tired, hackneyed and uninspired. However, if you are going to make a sequel to a film as distinctive looking as Sin City, then, really, there’s no recourse. The visuals have to stay. Personally, I think a bit more colour here and there may have gone a long way, with some colour (such as Green’s eyes) being startlingly effective against the monochrome.

The real problem, though, is the Nancy’s revenge storyline. This was penned by Miller especially for the film and, to be honest, it’s fucking terrible. It messes with the timeline needlessly (I genuinely can’t work out where it fits in), and ridiculously alters major characters to stage a rubbish action set piece. Nancy in particular comes off particularly badly here, being altered from stripper with a heart of gold to cynical superhero who can shoot a fly’s gonads out from 200 yards after drinking a bottle of vodka and shrug off bullet wounds to lay down a head shot. She’s also adept with a crossbow, and seemingly impervious to the pain of smashing her own face into a mirror (a startlingly nasty sequence).

Things were looking up for “big” Don Murphy. I haven’t done a murph joke in ages, and couldn’t resist it. Sorry about that, but this picture was begging for it.

Overall, this is a strange sequel to the original. I stand by my assessment that it feels almost lacking in confidence, and as such I find it very difficult to rate. Were I to rate each individual part, I’d give ADTKF 3 changs, as it is clearly aiming at being Sin City’s Farewell, My Lovely. I’d go as high as 2 for LBN and I think, all things considered, I’d Orangutan of Doom NR. However, I’ve only got one film to assess and rate here, so I’m going with 1.5 Femme Fatales out of a possible 4. Disappointing, or rather it would be if I had held any decent expectations for it.

Next up is one of the aforementioned trio, probably Premium Rush.