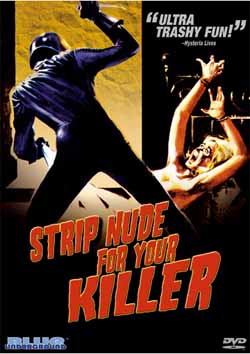 You could be a model!

Jarv’s Rating: One and a half Changs out of four. It’s terrible, but Lord help me, I did laugh. Not to mention that there’s shit loads of nudity, which helps.

It isn’t like me to deal in national stereotypes, that kind of thing is just not my style. However, if I was asked about the perceived reputation of Italian men, other than cowardice, natch, then I’d have to say that it was that they are all sexist chauvinist pigs more likely to pinch a woman’s arse than talk to her. Where does this reputation come from? Well, read on and I’ll tell you.

This is an astonishingly tasteless opening scene

Strip Nude For Your Killer is a giallo. That may or may not be a good thing, and in fact if the name “Argento” isn’t attached then it’s usually pretty easy to say that it is a bad thing. In fact, if the name “Argento” is attached then chances are it’s still a bad thing. This is just fact, and no amount of psuedo-grindhouse revisionism can change that. So, given that the bar is set awfully low, and I’m talking about the level that a snake’s gonads are usually found, what’s the film like?

It doesn’t have the most promising opening that I’ve ever seen. In fact, it has one of the most tasteless openings that I’ve ever seen. A nude woman is visiting a back street abortionist when no sooner can you say “giant Italian 1970’s bush” (and there are a good few of those on display here) she’s popped her clogs. The abortionist is clearly a dick of the highest calibre because his first thought isn’t to call the police but rather to call another dick of an even higher calibre called Carlo, played by Nino Castelnuovo(clearly the father) to come and dispose of the body by brilliantly stuffing it in her bathtub. Luckily, this is Milan in the 1970’s so the police are completely fucking useless and think a young, otherwise healthy woman died of a heart attack.

No sooner has the thought “I hope this dick gets killed” crossed your mind, than, sure enough, the doctor is killed by a mysterious motorbike outfit clad assassin. Carlo, the dick, doesn’t seem too cut up by affairs, as next time we see him he’s telling some silly girl that she could be a model purely so he can bone her in a sauna. However, he’s as good as his word and next thing we know he’s actually shooting her for his superbly named agency “Albatross”. Enter “artistic director” Magda (Edwige Fenech), she’s a completely unlikely non-porn star (not that it stops her getting naked at every available opportunity, and a few that aren’t really available). Bodies mount up, Carlo morphs into Sherlock Holmes’s retarded brother Dave that he never talks about, and he and Magda solve the crime and kill the killer. By the way, as if anyone gives a fuck, the killer is eventually revealed to be Carlo’s bisexual business partner.

Firstly, this is a giallo from the 1970’s. Therefore, there is no alternative but to watch it with some truly crap dubbing. As such, I can’t really talk about the acting in it. I’m sure it’s awful, but I can’t really tell. However, what I can talk about are the characters, and in particular Carlo. Jesus suffering fuck he is one of the most obnoxious and unsympathetic cunts ever put on screen, and given the amount of bush on show, and giant Italian 1970’s bush at that, it’s really impressive that he is in fact the biggest cunt on display. Take the scene where he goes back to Magda’s place. No sooner has he got back than, in a cack handed attempt to trick us that the killer (blatantly female, by the way) is in fact our “hero”, he’s got his hands round her neck. Surprisingly, she doesn’t seem too put out by this, and Carlo obviously pumps out pheromones like a broken BP oil rig as she (instead of administering the whack to the bollocks that he’s clearly begging for) chats away happily with him for a while. Eventually they do make the beast with two backs and the next morning, Carlo proceeds to berate her for not having milk in the apartment, but it’s alright because he’ll let her off as it’s her first offense. Blatantly the alternative was that he was going to beat her, but what makes this staggeringly twattish is that it’s her fucking flat. As if the film hasn’t made Carlo into enough of a tool, the final scene is of him attempting to force sodomy on Magda. Wow, what a guy.

All the women in this are hugely stupid and disposable, by the way.

Murphy prepares to get some sweet loving

It may not be obvious so far but this is probably (outside of Le Divorce which clearly hates women by being for them and making a concerted effort to reduce them to a vegetative state) the most misogynistic film that I’ve ever seen. It’s astounding how borderline offensive it is, and I have to say that writer/ director Andrea Bianchi was never going to be a contender for 1975’s Germaine Greer award for services to feminism. I can pick thousands of examples from it, but the one that leaps to mind is when the model fends off a rapist by, er, agreeing to have sex with him. Yikes.

BOOOOOOOOBS!!! Yup, that's pretty much all this film has to offer

Overall, this is crap. The story is crap, the direction is crap, the acting (I’m sure) is crap. However, it’s also funny and not for the reasons that Bianchi intended. Strip Nude For Your Killer is a chauvinistic and boneheaded film that delivers on the boob, bush and lesbian front with hugely unlikable characters that made me laugh on more than one occasion. I can’t say I’d recommend it, as it is amazingly misogynistic claptrap, however, damn it, it was probably the most entertaining Shameless film that I’ve seen. I will learn my lesson about watching their efforts at some point.

27 responses to “Jarv’s Schlock Vault: Strip Nude For Your Killer”