Christ it’s bloody dusty in here. I guess we should have invested in that maid service after all…

Tales of an Ancient Empire is the sequel to The Sword and the Sorcerer, a frankly ludicrous piece of 1980’s sword and sandal cheese with one of the simultaneously daftest but also most awesome weapons that this weird little subgenre produced. In all honesty, none of these films, bar the first Conan, are what you’d call actually good but a few of them, Beastmaster, Hawk the Slayer, Krull, TSATS etc, did aspire to highly entertaining cheese. And due to ratings laxity (because 1980’s) invariably slipped an awful lot of adult content into the fragile retinas of young kids. Such as me.

This, for reasons that I can’t really properly justify, was one of my holy grail terrible movies. I’ll try to at least explain, but bear with me here. Mother of Jarv, while in many ways a patient and admirable woman, is not great at recalling pop culture. She is also easily confused, but believed strongly that Disney cartoons were always acceptable viewing for a 5 year old. When I was about 6, having pretty much exhausted the selection in our local video shop, she managed to mistake The Sword in the Stone for The Sword and the Sorcerer. To this day, I have absolutely no idea how she managed this given: 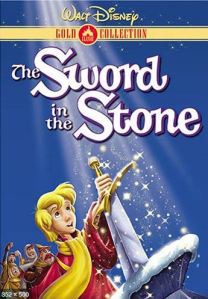 Nevertheless, she stuck me and my YOUNGER sister in front of it and then buggered off to do mum type things in the kitchen. Little was she aware of the massive level of parental failure here. Needless to say, this elevated this minor piece of schlocky drivel to a special place in my heart.

Fast forward to 2010, and I hear a rumour that they’re finally making good on the promise of TSATS and giving Talon another epic adventure. I’m aware that Pyun is not a well man, but still, this is a pretty simple formula (copy the original)- lots of stabbery, some triple sword blade pyrotechnics, stuff every single available square inch of the screen with boobs and get Lee Horsley back as Talon. Simples. Unfuckupable. Absolutely, totally, completely, impossible to fuck up.

And then it vanished. I gather that it was released, but it basically sank without trace- it certainly never got a decent UK release.

No fucking clue at all what’s going on here. Something something lantern?

Fast forward to 2019, and I’m mulling over the comparative virtues of recent cinema while idly fucking about with YouTube on my nutbusting commute home, and blow me down the whole of Tales of an Ancient Empire is available. So, I happily start watching away (people watch Game of Yawns on the tube, so I’m not overly worried about nekkid tits on my phone)…

And then the disappointment set in.

Actually, on start it isn’t too bad. There’s a nice portentous fantasy prologue thing, then some random drivel with daywalking vampire demons (one of whom is wearing bugger all and looks like she could be getting into some gratuitous nudity at the drop of a hat) who get offed by the epic Trisword from the original. So far, so passable. Then the score kicks in.

Imagine if the worst of 80’s hair metal had a baby with the worst of 90’s nu metal. That’s the soundtrack. To say it’s intrusive is a fucking understatement.

Next thing we know, we’ve got evil ancient vampire demon queen Xia (Whitney Able- who CAN act, so fuck knows what she’s doing here) who seems to be a bit angry about something. Except I couldn’t make it out for shit as the folio work on her voice is awful. There’s far too much echo, and a weird metallic sound. I get that she’s meant to sound demonic, but it just renders her dialogue incoherent- which is a fucker, because she’s got the most dialogue in the film. On the plus side, though, she’s wearing a costume that is best described as “fuck all”.

Then the chapter changes and we get a new title card.

VAMPIRE DEMONS WITH BEWBS!!! I actually have no recollection of this bit at all.

So, now we’re introduced to Princess Tanis (Melissa Ordway) and Queen Ma’at (Jennifer Siebel Newsom) they’re having a chat about how Tanis is only Ma’at’s half sister, cos Talon boned the queen at the end of TSATS- except we ALREADY KNOW THIS FROM THE PROLOGUE- and something BAD IS GOING DOWN IN ABERLOR. They discuss it for a bit, and plan on running away, but the chapter changes AGAIN (this is not at all irritating) and we stumble into chapter 3, delicately entitled SUCCUBUS.

Succubus! Sex demons. There had better be some bewb.

Sadly, there isn’t. We are, however, introduced to Kara (Victoria Maurette) and Oda (Michael Pare), who are escaping an evil pink mist of absolute evil. I think it creates vampires or something. Anyhoo, Kara is kind hearted and refuses to let Oda off a servant girl who is infected. Bad Move. This then has poor old Oda chomped. And scene.

I’m going to fast forward these a bit because there’s an awful lot of AND THEN AND THEN AND THEN AND THEN AND THEN AND THEN to this film. But, basically, Kara gets seduced and turned into a daywalker by Xia, who, it turns out, is her mum- which is pretty awful as the prologue had told us that Tanis’s mother was the Queen, but her HALF SISTER was the daughter of Vampire Demon Queen Xia. Basically, Talon had stuck his dick in crazy, and this is the result. Tanis escapes and travels to Durkadurkastan to find Talon. Kara is in pursuit. Oh, and Kara gets her juggs out in a weird incestuous scene at the whole turning thing.

You may have seen the slightly bigger imbecile on the cover I used for this review. He’s in this film for about 5 minutes. Seriously. And he’s on the fucking cover.

So, Durkadurkastan. Tanis meets Aeden (Kevin Sorbo- completely miscast) who is a) a massive, massive dickhead, b) a petty thief and c) Her half brother. Ol’ Talon has been BUSY. Shenanigans ensue and Tanis cuts a deal whereby the Sorbo will introduce her to the rest of her half sisters- Malia (Sarah Ann Schultz), Rajan (Janelle Giumarra)  and her daughter Alana (Inbar Lavi). Just as a quick break in the action she fends off Sorbo’s inept attempt to bone her. Also, Kara, for reasons, is pursuing them originally to spy on them, but then to kill them. See, it turns out that Tanis is a human magic 8 ball, and KNOWS THINGS. Useful things, such as the world is going to end in 6 days because reasons.

Now, at this point, you’d think that the band has been put back together, so Talon is going to make an appearance and we’ve got about 40 minutes of gratuitous vampire slaying badassery ahead. Well, you’d be wrong. What actually happens is:

Kara ambushes the Sword and Sandals version of the Brady bunch and captures them all. She shares some BANTZ with someone hiding in a cell, who is all sorts of mysterious and shit (wonder who that could be). Then it cuts back to the fucking start scene and…

DAYWALKERS. Where’s Blade when you need him. Incidentally, look at the expression on the one on the left’s face. Gold.

Film ends. You’ve taken me to the circus and I didn’t get to see a fucking elephant.

This is a colossal waste. I’m not going to bother critiquing the acting (because it’s all meh to shit), or the cinematography (when inside, fucking dreadful), or the direction (all over the place), but instead I’m going to be rude about the ambition, and the not meeting of expectations. This, actually, wasn’t a bad idea for a film. However the whole plot of this dismal mess should’ve taken place in probably 20, but maybe 25 minutes of screen time. There is literally no reason for it to be longer than that. Then the actual film should’ve been Talon and family slaughtering the undead monsters. With Tits. That’s a good film. This fucking film, however, spent a whopping 85 minutes (laughably short for a feature) on what is essentially act 1, and then FUCKING FINISHED. This is some obscene Lucas/ Jackson-esque story bloat, right there. And it’s so fucking stupid because nobody was going to give this a sequel. It took them over 25 years to do the sequel to TSATS and that made 10’s of millions of dollars.

Overall, if ever a genre needed smothering quietly with a pillow, I think Sword and Sandals is it. It’s had its day in the sun, it’s no longer the 1980’s so kids aren’t interested in excessive stabbery and bewbs in a fantastical setting. In fact, fantasy in general has been completely kiddified by the interminable Tolkien adaptations, so the chances of getting something with tits and violence in it are minimal, which just confirms that the whole genre needs putting down. One fucking Chang, and that’s for Maurette’s cans and whoever did Able’s frankly inexplicably brilliant costume.

Apparently, there is indeed a part 2. I actually feel a compulsion to see it as I’ve already sat through the set up, so am fucking owed the pay-off. However, I can’t find out if it actually exists. I think they did shoot it, as Tanis has some Prolepsis type Visions.

That’s the rust shaken off, so I’ll be attempting something more adult next time.

10 responses to “Jarv’s Schlock Vault: Tales of an Ancient Empire”