Jarv’s Schlock Vault: Nazis at the Centre of the Earth 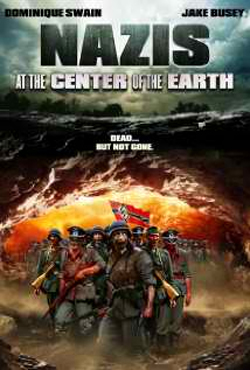 A plague on Asylum. Seriously, these hacks give schlock films a bad name. Their Modus Operandi is so predictable and so god damned annoying that I genuinely resent them for it. This is how the average Asylum film comes into being: they scour the internets to see what film has a “Buzz” about it. They then watch the trailer/ look at the promo art for it. Having decided that there is something there, they then shamelessly plagiarise the material, changing one major and many minor details. The victim of choice this time? Iron Sky. The problem here is that the trailer to Iron Sky bears little resemblance to the actual film. In all honesty, I was expecting Iron Sky to be a lot closer to Asylum’s attempt rather than the film it turned out as, so I can easily see how they were misled.

May contain a deeply confused Jake Busey and Spoilers below

This does not, however, excuse them. A great touch with Iron Sky is that the Nazis have been living in almost total isolation. They don’t tell us how they got to the moon, and they don’t bother explaining anything. Instead, we just accept a Nazi moon base and society, because it’s just there and they treat it as being utterly normal. Here, however, the film opens with Dr. Josef Mengele escaping from the Allies. Incidentally, never, ever, ever use “real” Nazis not called Hitler for these types of film, as it always leads to a sticky piece of exposition later on. In this case, because we have Mengele’s corpse and know full well what happened to him, the film has to jump through ridiculous hoops about how he was dying of extreme arthritis so performed a transplant on himself replacing his bones with metal then sent his skull to Brazil. See?  Disbelief is no longer suspended, it’s come crashing down to Earth. I mean, really, he replaced his bones with metal using latent undiscovered technology in the (and this is the important bit) 1960’s? You want me to swallow that, do you? And, by the way, the cunt would still be in 3 figures when the film is set, so metal bones or whatever he’d be an old, probably senile, fart, with the high possibility of not being able to control his bladder. 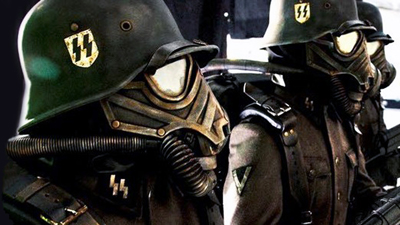 You look awfully familiar. Maybe in something I’d seen in the cinema very recently.

Next up, we’re introduced to Paige (Dominque Swain) and some other alleged scientist. They’re working in Antarctica when he strikes metal below the ice. The nazis are on to this and suck him and swain below down an instantly appearing big hole. Back at base, Reichstad (The Busey Jr) is arguing with Lucas (Josh Allen) about the missing pair. The whole team (top of their profession scientists), decides to go investigating in the snow wastes, and in no time discovers the hole. Hopping in with no regard for personal safety or the laws of physics, they emerge at the centre of the Earth in a tropical climate. Back in Nazi Camp, Mengele is up to no good. In a fairly grisly scene he strips the flesh of the guys face, while Swain defects (speaking a load of cod Medicine) and is accepted due to her German heritage. Back with the douchebags and the Busey is on an exposition fest. He expositions away about legend, then he expositions away about science, then he expositions away about his team, in fact, he expositions all over the fucking place leaving a horrible mess behind him.

This is the precise look Busey had on his face when he was told he wouldn’t be in Starship Troopers 3 because he’d got fat.

Finally, the Busey and his team come into contact with the Nazis, who waste no time in lining them all up. Mengele appears, and clearly riled by The Busey’s attempt at out-expositioning him ups the ante by laying on a heavy load of exposition about history, the Nazis, science except he insists on peppering his speech with acronyms. I’ve got one few for you, you fucking cockwomble:  STFU.  Out comes evil Nazi trooper, who’s wearing the unfortunate dude from earlier’s face. So, queue more fucking EXPOSITION about what’s wrong with him and so bloody forth. The evil Doctor puts our team together, but Silje (Marlene Okner) observes May (Lilan Bowden) up to no good with Lucas, so shops them to Reichstad (who it’s revealed, for no reason other than to service the plot, that she’s fucking, oh and he’s a Nazi spy as well).

Mengele orders May and Angela (Maria Pallas) to the showers. The girls are made to strip, May is dragged away, and then Angela is gang raped. Pallas hasn’t got a single line of dialogue that I can remember, but is forced naked and then raped by corroding nazi zombie perverts. May in the meantime is strapped to an operating table with her brain open. Reichstad jams a big syringe into her brain, but not before he indulges himself by having an exposition about science. Dude loves his expositions, but once he’s done he then injects what he drew out from her cortex into a metal tube. Fuck all happens, and Mengele in a fit of temper dashes May’s Brain into the wall. Silje makes the mistake of telling Busey that she’s pregnant, with his child, inspiring him to terminate the baby for the stem cells and inject it into the aforementioned metal tin. The stem cells serve as an accelerant ant the tin comes to life revealing what looks suspiciously like Robocop 2 but with Hitler’s head on top. Only kidding, it’s obviously ripped off from Castle Wolfenstein.

I can’t be fucked to do this with the rest of the film, but you can see where this is going: Nazis launch big flying saucer, everyone dies aside from surviving duo (Swain and Allen) who scupper it then beat up robo-Hitler (exact same ending as Robocop 2). Save the fucking world.

Right, I can’t be fucked with this load of toss. What’s good about it? Robo-Hitler is mildly amusing and the noise the Nazi zombie’s face makes when it’s torn off and thrown at the wall made me laugh. What’s bad about it? Everything else. Honestly, this film is an exposition heavy load of rancid fucking toss. Busey and Swain blatantly don’t care, the writing is dire, the effects shonky, it’s boring and on more than one occasion viscerally unpleasant.

This is simple, it’s because Asylum took the idea of hidden Nazis and made a horror film. This was a monumental mistake, as this premise lends itself primarily to sci-fi/ action, or, in the case of Iron Sky, comedy. There’s no reason that I can think of  to take something as fundamentally silly as Nazis in the centre of the Earth and turn it into some kind of quasi-Hostel nastiness. Why would you do this? It should be a riot, a  big and stupid blast with gunfights galore, overly macho lines, evil nazis and so forth. It should not, under any circumstances, feature a forced abortion for stem cells. What the fuck were they thinking of?

Overall, this is wank. Awful, useless and boring wank. One of the things that annoys me intensely about it is that there are lots of individual shots here, particularly the troopers in gas masks that they lifted straight from Iron Sky’s production art, and the flying saucer bears more than a little resemblance to the big one at the end of that film. I don’t mind theft like this, but by shooting out of the blocks so early, they’ve fundamentally misunderstood their source material- they’ve been sold a dummy, effectively. Needless to say, I don’t recommend this one, and it is, in fact, shit.

Next up is that stupid 25th Reich thing with Nazi Robot Spiders from the future. I hope, anyway.

19 responses to “Jarv’s Schlock Vault: Nazis at the Centre of the Earth”