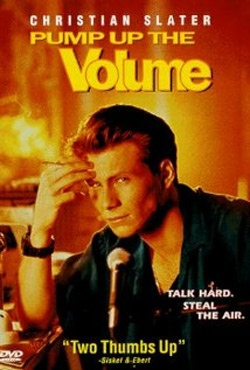 Man, I loved this film back in the day. Released on 23rd August 1991 in the UK, Pump up the Volume is an interesting, surprisingly dark, and surprisingly prophetic little film that reeked of cool. Taking the 80’s teen movie template, with gifted kids thwarting bumbling adults, Pump Up the Volume had a nihilistic faux-Gen X type message that lurked cleverly underneath a witty, entertaining, and genuinely angry movie underpinned by the second fantastic performance by Christian Slater in a teenage film. The first, of course, is in the incomparable Heathers, but Pump up the Volume works wonderfully well as a companion piece to that film.

Contains hard talking and spoilers below. 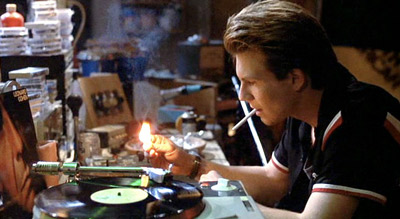 “Hi Harry, long time listener, first time caller, I’ve got a question for you. What precisely is a cock ring?”

Mark (Slater) is an unhappy and disaffected teenager. Shifted from New York to Arizona by his parents, he was given a shortwave radio to allow him to communicate with “friends” back East. However, the radio doesn’t have the power to reach that far, so Mark uses it to comment on events in his local school, play rebellious music, and broadcast obscenities across the airwaves. His persona, the naked but for a cock ring Happy Harry Hardon (shortened to Hard Harry) has a significant following and has reached the core of disaffected students that form the school’s population. Hard Harry’s 10pm broadcast is required listening for them.

Nora, an equally unhappy girl (Samantha Mathis), is stalking him. She sends him erotic (and terrible) poetry written on blood-red paper and has organised a chart to decipher who he is. In the meantime, though, he promises to answer all letters live on air, and if they leave a number, he’ll call them. When contacted by the miserable and depressed “serious” he doesn’t take it, well, seriously, resulting in the suicide of Malcolm. This event steps up the attempts by Annie Ross’ Principal to catch him, and brings Hard Harry to the attention of the local media. Eventually, the pressure mounts on Mark, leading to the farcical chase at the end of the film, and the incredibly bleak closing scene.

Christian’s audition for the remake of The Last Temptation of Christ was going swimmingly.

Slater is stunning here. He’s effectively playing two roles, the lonely and socially backward Mark and the irrepressibly vulgar Harry. On screen for almost the entire run time, he delivers scathing monologue after scathing monologue on the state of the world with an arch and bitter tone. It’s a cracking performance, actually, and I still think of him as a bit of a lost talent, given that he really should have pushed on. Mathis gives able support, as does the cast of teenagers, but I’d like a special note of Annie Ross taken- she’s a fine actress, and works well in this uptight authority role.

The writing here, though, destroys almost everything else on my list. Harry is modeled on Lenny Bruce, amongst others, but it’s the content of his monologues (when he’s not feigning masturbation) that electrifies. He coins a handful of catch phrases: “Talk Hard” (actually supplied by Nora), “So Be It”, and “Thought is a virus” that capture the student zeitgeist and develop a life of their own away from his show. So be it, in particular, sums up the nihilism of the character, both the persona and the real teenager, and it’s no surprise that the other teens picked it up so gratefully.

“Hi Harry, long time listener, second time caller, you are aware that The Beastie Boys are entirely overrated, and even were back in 1991?”

Mark is seriously unhappy. His parents were failed hippies, and he sees the world as broken, exhausted and wasted. There’s nothing new for Mark, no new frontiers to be discovered, no new voice out  there. Ironically, he hasn’t realised that Hard Harry is the voice he’s been waiting for, but that’s neither here nor there. What is interesting, though, is that he reserves particular contempt for the 60’s. It actively pains him that his father was such a protester as a young man but has now sold out to “the man”, and his disgust is palpable in almost every speech. He’s quite right, the 60’s and the  spirit of the time were a complete failure, and the hypocrisy of the baby boom generation almost knows no bounds.

Mark’s father, actually, is one of several obvious adult hate figures in the movie. The man tries to be “right on” and sympathetic, but even he admits that he’s now part of the system. Ross as the Principal, is also obviously bad, and Counsellor Deavers, who does eventually see the light is portrayed as a manipulative henchman to Ross’ evil plan. He’s also, amusingly, painted as being hopelessly dim and out of touch, with his helpline (shutting the door after the horse has bolted somewhat) scathingly ridiculed by Nora. To be fair, the slogan “Bionic” is a touch lame, and the opening hours thing is laughable, so she’s got him bang to rights.

Nora is a fantastic groupie.

What I find particularly interesting about Pump Up the Volume is how prophetic it was. Sure, Mark’s message is self-important teenage nonsense, and we all do grow out of it, but the medium he uses is very interesting. In a way, Harry is an early outlier, his anonymous persona predicts the actions of millions of bloggers out there.  Hell, I’m no exception, hiding behind a veil of anonymity to take cheap pot shots at subjects that I’m not qualified to talk about. Admittedly, I don’t feign masturbation for the pleasure of literally dozens, but I have thrown profanity and insult at countless directors and producers from behind the safety cloak of a persona. I’m not Hard Harry, as I’m not remotely as depressed as he is, and I clearly lack Mark’s burning rage, but Pump Up the Volume brilliantly identified what many people with WordPress/ Blogspot/ whatever accounts do on a regular basis today. Sure, it may be coincidence, but the ending with the number of pirate radios multiplying like wildfire always brings a wry smile to my face.

On this note, it’s important to point out that Mark doesn’t always realise the consequences of his actions. He does, often, after the event (regretfully musing that he didn’t tell Malcolm not to do it), but some of what he says is really quite incendiary. There’s a fantastic scene where he exhorts his listeners to “Go crazy”, and what he actually means is jump around the room, fuck each other, or whatever. What it’s taken as by Paige, (Cheryl Pollak) a deeply lonely overachieving preppie, to mean is quite literally “go crazy”. She takes her Yale banner, places it in the microwave with all her cosmetics on top, turns it on, and sits there waiting for it to explode. Unsubtle in its symbolism, there’s still something very satisfying about this sequence, and Pollack to be fair plays it perfectly.

This cack-handed scene shows simultaneously the best and the worst features of the film. On one hand, it illustrates the loneliness and desperation of the student body, but on the other it’s hopelessly preachy, and blazingly unsubtle.

The other point to the film is that it is genuinely amusing. Harry is an engaging persona, and Slater has great timing in the role. Much of what he says isn’t funny on its own, but the delivery very often is down and dirty, and as such lines like “Now I’m depressed. Now I feel like killing myself, but luckily I’m too depressed to bother” are legitimately amusing. Nihilistic, sure, but is it no surprise that a man who uses Leonard Cohen’s Everybody Knows as his lead in tune has a negative outlook?

Mark’s playlist, actually, is less interesting. I know he’s meant to be from New York, and therefore there’s a lazy assumption that he’s ahead of the curve than the poor Arizona residents when it comes to music, but it’s a pretty trite and predictable lot- the Pixies, Primal Scream, Beastie Boys, Leonard Cohen, The Descendants and so forth. However, what the film does do well is pick out the individual sections of each song that stick closest to the bitter message. For example, when Mark is attempting to broadcast on the move, the sample used is “Daddy, I’m in jail”, which isn’t anywhere near as ironic or smart as he thinks it is, but somehow strangely fits with the action on screen. This is, actually, a good soundtrack, and I’m sure at the time would probably have been a great one, but it really does date the movie somewhat. There are moments when I’m half expecting to hear Suicidal Tendencies, and that’s not a good thing.

I appear to be writing a maximum review here, but Pump up the Volume has significant problems. Firstly, the crap at school doesn’t actually warrant the treatment that Mark is dishing out. What Ross is up to is effectively grade manipulation to keep her school high up the league tables, and who honestly gives a shit about that? Secondly, there’s a level of clunkiness to the second act, from the suicide onwards (although Mark’s reaction to it is brilliantly handled) that doesn’t quite sit right. Finally, and more importantly, the appearance by the head of the FCC (I can’t actually work out what Mark has done, in all honesty) is both embarrassingly inept and more than a little preachy. He’s meant to embody all the powers that be in one figure, but the villains are already clearly defined. When he says “This is what’s wrong with free speech” it’s embarrassing, a trite and ridiculous statement that oversteps the line and is the film moralising at the audience.

“The FCC won’t let me be…” Eminem sucks.

Overall, this is still a belting film. It has dated, and there are obvious problems with bits of it, but nevertheless it’s a raw, charming and angry film. The central performance from Slater, and the support from Mathis are so good, and for the most part the script is so sharp, that I can easily forgive it’s foibles. I’m going for 3 slutty anime DJ’s out of a possible 4, and I do recommend this one. In a lot of ways, from the soundtrack through the message, this is one of the definitive films of the early 90’s, even if only as a snapshot of a very specific time and place. If you don’t like it, then as Harry says…

Nah, only messing. Next up is David Lynch and classic Hairpiece action in Wild at Heart, a film I’ve completely changed my opinion of.