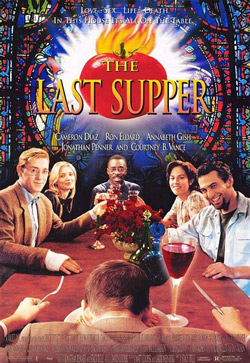 This has literally never happened to me before. Seriously, I’m not joking about this. I have been forced to change my entire review because of something I found on the internet.

Obviously, I’ve written film reviews before, and I’m well aware of what a toilet the World Wide Web is, but I think that I’ve finally found the single stupidest person with internet access out there. A person so stupid that they really shouldn’t be allowed near computers just in case they snap the keys off and swallow them. A person so dimwitted that they make that fat Star Wars dork on YouTube a few years ago look like a founding member of Mensa. I am almost completely struck dumb by the sheer cretinism and intentional point missing of this utter moron. In short, I have found the Tea Party’s core vote.

And what, you may ask, has this got to do with The Last Supper, a black comedy starring Cameron Diaz released on August 23rd 1996 in the UK? Well, read on and I’ll tell you.

The Last Supper is a dark as midnight black comedy telling the story of 5 liberal post-graduate students sharing a house. Every Sunday they hook up and debate the big issues of the time (how to remove head from rectum and what we can pressure the government to ban) while achieving the sum total of, er, nothing. One night they grant a place at their table to Bill Paxton’s right wing trucker, and his reprehensible racism, misogyny and far right beliefs cause an argument. Killing him by accident, they (Jude played by Cameron Diaz and Luke played by Courtney B Vance are the two most important) argue about what to do with the body. Luke and Marc (Jonathan Penner) persuade the other three to dispose of the body. This prompts the debate that the world would be a better place if they could go back in time and kill Hitler before his rise to power.

This epiphany prompts the group to invite notable local right wing figures to dinner, and then debate them. If they can persuade the individual to recant their views, then they don’t get to drink the poisoned wine and therefore end up in Jude’s tomato garden. Eventually the toll of murdering all these people begins to manifest in the characters in the to be expected ways, Jude crumbles under the guilt, while Luke’s psychosis starts to become apparent. The group nearly splits up over the murder of a teenage anti sex education advocate, and Luke murders the local Sheriff who was sniffing around their suburban cemetery. The climax of the film has the group attempt to poison talk show host Ron Perlman (based on Rush Limbaugh), who pieces it together and murders them instead. To be fair, they have it coming. 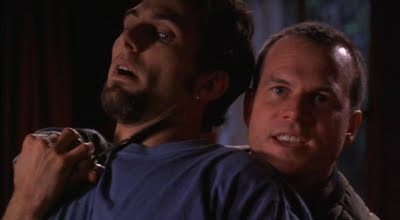 “I’m walkin’ out of here, or the hippy gets it”

There’s a danger with this sort of film. The Last Supper clearly designed as a message movie, something to keep the liberal chattering classes entertained before they go out trying to ban pushchairs with unacceptable safety belts and the like. However, the danger is that when you’re as clever as Dan Rosen (writer) and Stacey Tile (director) think they are, that the subtlety of the message may be missed by those that most need to hear it. With that in mind, I thoroughly suggest you read this- it’s from a complete imbecile writing for a waste of bandwidth called “Just Conservative” and it is the least coherent and clearly most cretinous pile of drivel that it’ s been my utter joy to come across in a while.

The man from Del Monte, he say….

Before I go on, I’m not intending to sneer at this poor devil too much. I’m going to a bit, because I can’t help myself, but the review linked to is a direct result of allowing an ingrained tribal political dogma to inform your entire life. There’s no such thing as a good “Conservative” movie, just as there’s no such thing as a good “Liberal” movie. What there are are good and bad films, and they may have an ideology, or a message or whatever, and you may disagree with it, but that doesn’t necessarily make or break the film by itself. What I’m trying and failing to get across here is that while the majority of message movies are bad, it isn’t because of the message itself, it’s because it may be lacking in some other department. Incidentally, right wing nut jobs, the slasher films that you so despise for their sex and violence are actually the most morally right wing type of film out there. I know that’s facile and overly simplistic, but even a second’s analysis will allow you to work out that promiscuity and substance abuse in these films automatically leads to punishment- invariably of the fatal kind. Think about it for a minute.

Someone really needs to look at their spice rack.

Anyway, Just Conservative think that “Liberty in this movie means killers trying to state political views. Every thing in this movie stands against our beloved America. This movie is screaming hatred against this Christian nation.” Stating something as insane as that is, in my opinion, begging for it. It’s obvious honk, to begin with, but I’m not sure how much further it could be from missing the point of the film. God bless ‘Merica.

See, I thought it was pretty obvious. I thought it was fairly unsubtle. I didn’t realise that The Last Supper was waging war on Life, Liberty and the American Way. How did I miss that? Is it because I’m dangerously left wing? I don’t think I am. Is it because I’m stupid? Very possibly. Or is it because I don’t think in binary terms, I can look at something and see that there are multiple angles that the film is getting at and that politicians of any stripe are vermin equivalent to the bacteria floating in a Mexican toilet bowl?

Damn it, it was the Salmon mousse

The point here is that you aren’t meant to sympathise with the murderous students. Luke is obviously a psychotic, and they are all weak, pathetic and whiny. You aren’t meant to look at the people and think that it’s a good thing to murder a priest (hilarious scene) because he thinks that abortion is bad. Their problem is that, ironically, they’re guilty of the exact same dogma as the poor deluded simpleton that wrote that, for wont of a better expression, review. The left, or the more sensible section of it, doesn’t want to stifle debate just as the non-extreme right does not. These aren’t admirable people: they’re murderous weaklings, lacking in the intellectual faculty to win a case by argument and are, and this is the important bit, exactly the same as those they despatch.

Brilliantly summed up by Perlman at the climax of the film, where he points out to the dumbstruck quintet that he doesn’t believe his dogma; it’s a persona and he’s taking people for a ride. This, frankly, renders them speechless, yet it’s to the film’s credit that these idiots are this naive. Does any politician believe a word of what they stuff in their manifesto? Of course not, because if they did, then they’d be zealots and far too dangerous to be allowed anywhere near power. The world simply isn’t as black and white as our heroes believe, people are not split down an imaginary political line where the good live on the left and the bad on the right. People are just people, scumbags and saints live side by side, and it’s this that they simply did not understand.

It’s not a perfect film. Lots of it is incredibly clunky, not least of which is the plot device of the cop on the trail, and it’s crass and unnecessary to make their first victim a sex offender. Furthermore, the most entertaining section (the killings) whips by far too quickly with far too much focus on our cardboard liberals falling to pieces. By the time Perlman appears on the scene (an incredibly lazy piece of writing, this), the film has lost momentum, it’s bumbling along not going anywhere and not making its point. Each killing has accelerated with the pro-smoking advocate being on screen for about 14 seconds before they stuff the arsenic laced wine down his throat, and this is to the detriment of the film. This is a mistake, because we’ve become  desensitised to the killings and shortening the time they have to show their abhorrent nature to our crusading group of morons means that the killings become less righteous and more sordid, and although the pettiness of their victims is increasing, there’s no sense that they still believe in their cause- Luke is doing it for kicks, for example.

Ron couldn’t contain his joy at sneaking the part of Jack Hell from Roddy Piper.

Overall, this is a good film, and with a bit less of a broad brush it could have been a great one. It’s darkly funny, well acted, polished and very impressive, but the flaws in it work to the detriment of the point that Rosen was trying to jam down our throats. Perlman’s appearance is frankly a relief, as his cameo steals the whole film without any effort whatsoever. Nevertheless, I do recommend it, because apparently it’s dangerously subversive and offers an insight into the evil pagan mind of the left wing who want to destroy your lives. They know where you live, by the way. How’s that make you feel? Secure? I’m giving The Last Supper 3 deluded Hippies out of a possible 4, because I do rate this film, although I do in a way look at it as an opportunity missed.