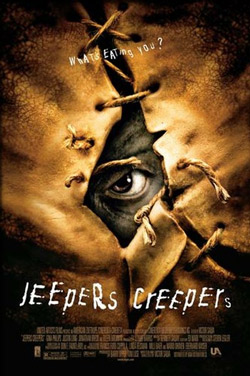 Jeepers Creepers (August 23rd Central Europe)is a problematic film to review. It’s an OK movie, don’t get me wrong on this, and I did quite like it until I happened to find out a few salient points about the director, Victor Salva. There’s a whole level of discourse that has gone on over the years about separating the artist from the work, but it’s something that I’ve always struggled with. It’s a bit of a shame actually, that I now look back at films such as Jeepers Creepers with the knowledge that Salva is a convicted paedophile of the rankest kind having served a pathetic reduced sentence for filming the abuse of a 12 year old boy. Still, I’ll do my best.

Contains rubbish songs from 1938 and spoilers below

Darry (Justin Long) and Trish (Gina Phillips) are a very unlikely brother and sister. Driving across country, they play a game to pass the time, spotting license plates and assembling words out of them. Spotting a big black truck, Darry naïvely calls the number plate as “Beating You”. Next thing you know, they’re stuck in a nightmare from Duel with the truck appearing to attempt to run them off the road. Spotting a shadowy man dropping what looks like a body down a pipe, Darry pulls them over to investigate. 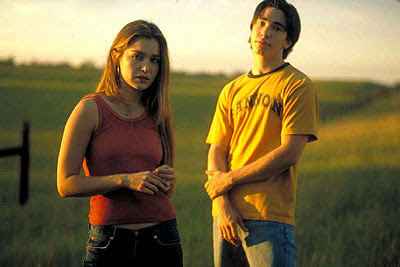 TomTom proved to be no use in the middle of Nebraska.

Due to an act of incompetence, Darry himself is dropped down the pipe and finds himself in the basement of an old church that houses countless corpses, all of which have been dismembered in some way. After a disconcerting call from a psychic (Patricia Belcher) who warns them to run if they hear the tune “Jeepers Creepers”, they spend the rest of the film battling “the creeper”, a pathetic refugee from Buffy the Vampire Slayer. Eventually, the film culminates in the Creeper cutting swathes through a police station to get at the twins- before he takes off with Darry into the night.

This is a film of 3 parts, or acts if you will. The first act is easily the best bit with Darry and Trish being traumatised by the menacing truck and the discovery at the church. The tension is high, and the film pumps along at a rare old clip. Long and Phillips are sympathetic in the lead roles, and their inter-sibling bickering comes across as highly convincing. At this stage of the film, Jeepers Creepers looks like it could be a potential classic. 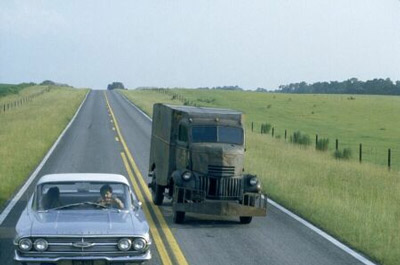 “When I hit the dashboard, bring the car to an immediate stop”

The second section somewhat lags in comparison. The eventual reveal of the creeper is a bit of a let down, and squanders the effective imagery with the scarecrow, while all the psychic nonsense is somewhat tiresome, Belcher does at least try hard with what is a hokey and half-baked role. Her purpose in the film is clearly to guide the audience through the mythology, but really, she poses more questions than she provides answers. There is a notable high point in the film, with Trish running the monster over and then backing over him to make sure, but really, it’s not great. 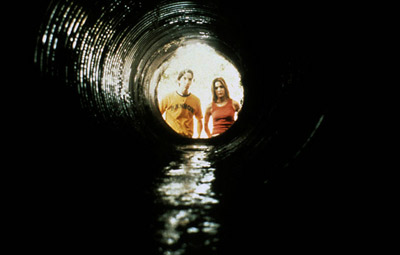 “Are you sure this is where you hid my Pokemon collection?”

The finale in the cop shop, on the other hand, is poor. By now the Creeper has been revealed, and he’s quite blatantly a man in a plastic suit. The tension from the first section has been completely dissipated, and the monster is, to put it kindly, ludicrously over-designed. He’s had the entire kitchen sink thrown at him, and I’m not joking about this: wings, stupid flaps on his face, a head shroud thing, can climb on walls, ceilings etc, long white hair and so forth. Less, with the Creeper really would have been more. As a result, the last third of the film is very, very silly and to be honest a bit of a waste. To be fair, though, the film does throw a nice bait and switch, working hard to make the audience believe that Trish was the Creeper’s target for the whole film, before revealing the victim to be Darry at the climax. So, there is always that. 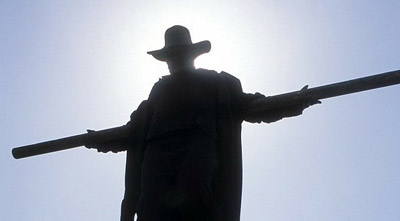 Jesus was much happier when they gave him a hat.

The mythology here is quite well thought out. The Creeper awakens once every so often, and has to hunt victims to replace body parts (via consumption) that are failing. He finds parts from people that are compatible with him by inducing a fear-based adrenalin rush and therefore tasting the pheromones released. This is a good idea, used effectively in the first third, and consummated with the repellent licking scene in the finale. Unfortunately, the only way to get this complex mythology across is to use the psychic as a kind of magic exposition machine- it’s on her shoulders to deliver the faintly ridiculous detail that the plot needs. I’m not for this, personally, and would have left it out, because as Halloween showed, a motiveless killing machine is always far more effective than a monster with a back story. To abuse a Keats quote, the magic always seems to vanish for me when films insist on unpicking the rainbow. 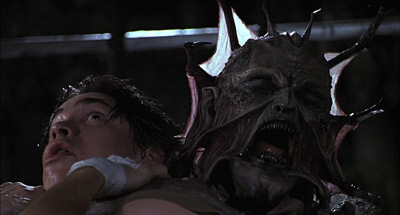 Celine Dion was looking a bit worse for wear nowadays, and even the groupies tried to escape.

Then there’s my fundamental problem with the film- I know you’re meant to separate the art from the artist and all that, but, really, he’s a disgusting fucking degenerate pervert. In all honesty, I find it really hard to feel anything in the way of affection for this film. Which is a shame, because it’s clearly well made, and although not the polished article, I can’t, legitimately, ever warm to it and, further, I begrudge the money I spent on the cinema ticket. Yes, I know this is fundamentally unfair, and more of a criticism of me than the film, but I’m never going to acclaim this one.

Overall, judged on its own merit, Jeepers Creepers is an OK monster movie. It works well for the most part, and it does pass the time without being particularly offensive. Sadly, I find myself unable to divorce the film from the director, and that, I suppose is a bit of a pity. If this is your sort of thing, then you’ll have fun with it, if not then it doesn’t stink the screen up. I’m going to give it 2 crap rubber monsters making out with Captain Kirk out of a possible 4, even though every fibre of my being is screaming to slaughter it.

Next up, is the thoroughly lousy Gossip, a film that wants to be a twisty-turny type thriller but fails. 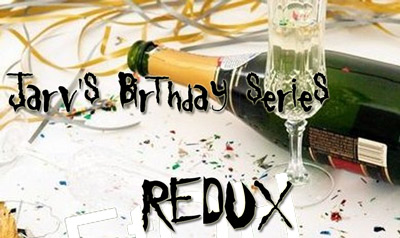