Color of Night (release date 19th August in the USA) is a monumentally dumb film, so dumb in fact that it forgot the definite article at the start of its title. It’s also a hilarious one, but don’t let that distract you from the fact that on almost every level this is a cinematic stinker, a borderline skin-flick with a plot that would get laughed out of even the worst airport fiction. It’s so blazingly and crushingly inept, actually, that it doesn’t belong here and should live in the vault along with the other dregs of cinema. That it doesn’t is that it was directed by Oscar Nominated Richard Rush, and stars (check this out) Bruce Willis, Jane March (who incidentally, and quite understandably, hates it), Lesley Ann Warren, Scott Bakula, Brad Dourif, Ruben Blades, Lance Henriksen, Eriq LaSalle and Kathleen Wilhoite. Holy shit, what a cast, and what a fucking laughably awful film. I think the best word for it is “risible”.

Absolutely under no circumstances does this contain Bruce Willis’ cock, but it may contain spoilers below. 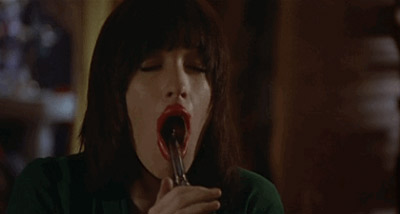 Bruce Willis is a shrink called Bill Capa. Don’t laugh, particularly if you’ve seen it, because I’m not joking, but he’s apparently a brilliant New York psychoanalyst with one of those plush offices with big windows in Manhattan. He’s dealing with difficult patient Kathleen Wilhoite, and doesn’t seem to notice that she may be on the verge of suicide. Just as well the internets weren’t around back then, because on http://www.rateyourshrink.com he’d be getting a lot of damning reviews. Anyhoo, she can’t take any more of his horseshit, so goes and spectacularly throws herself out of the window. Can’t say I blame her, to be honest. Bruce stands at the top and stares forlornly down 60 odd floors at her body splattered all over Broadway. As he looks, her blood fades from red to grey, thereby delicately letting us know that Bruce may have psychiatric issues himself.

I think Bob is a bit suspect. It’s the lycra. Never trust any man that has and chooses to wear his own lycra.

Anyhoo, it’s not just the audience that have spotted this. His dear friend and mentor (some old fuck that I can’t be arsed to look up) waffles a load of psychobabble at him about how his colour blindness is him “repressing emotions” or some such nonsense, and so Bill decides to pack it in and go to LA to visit best bud Bob (Scott Bakula). Which is strange, because despite being best friends, Bill doesn’t seem to know that Bob is a squilloinare book selling psychiatrist ninja with a plush gaff and more money than God. Anyhow, Bob realises that Bill has issues so ropes him into a therapy group filled with the worst nuts outside of Planter’s waste bin.

Don’t laugh. Oh go on then, you may as well, everyone else is.

Nothing happens, so Bill and Bob the flowerpot shrinks go off to compare cocks in some kind of homoerotic lycra clad bike ride thing, and then Bob is unfortunately murdered by a chav in a hoodie. The cops think that Bob may have been offed by the nutty patients (stunning piece of deduction) so rope a reluctant Bill into continue on with the sessions in the hope of making the desperate killer reveal himself (to be fair the patients also demand this despite the fact that Bill has blatantly all the therapeutic ability of Attila the Hun on PCP). This, I feel, is somewhat similar to letting the monkey have the keys to the banana plantation, but I’m not a crack detective on the LA Homicide Squad, so what the fuck do I know.

I am nigh on sure that isn’t your pool Bruce.

Bill, however, decides to stay in Bob’s place (er? Hello? Are you allowed to do that, because it looks like squatting to me. Even though he is dead, and I suppose nobody cares). Before you know it he hooks up with local hottie and driving instructor Rose (Jane March) for some grubby (really a lot of, and it is very grubby) sex in pretty much every location possible. However, he’s having problems with his only patients, who are, shockingly, being knocked off by an unknown assailant. Who can it be? The most likely suspect is Tommy, who has serious issues and genius shrink Bill has diagnosed as being like a ticking time bomb, but it can’t be him for two reasons: he’s pulled out of therapy by his stand-up brother Dale, and I’ll come to the other one in a minute.

Don’t mind me, love, I just came to fix the copier

Bill, aside from being colourblind and possibly the worst shrink in the history of psychiatry (honestly, I’ve seen waffles with more cognitive ability than this dickhead) is also quite obviously blind. He can’t, and believe me he’s the only person that can’t, spot that his paramour/ shag buddy is (DUM DUM DUM) Tommy in disguise. Or Tommy is her in disguise. Whatever. Fuck it. It’s fucking hilarious. Just in case you don’t believe me I present to you Exhibit A:

Jane March. Let’s face it, you would.

Also obviously Jane March. Still so sure you would?

Anyhoo, “Rose” has formed weird relationships with everyone in the group (seriously) but is being sexually tormented by her brother. This has caused her psyche to fracture, and created the “Tommy” personality. Her brother, in the meantime, is none too chuffed with her sharing her fish taco with everyone around so is knocking them off to get her/ him/ it back. Cue showdown, inventive use of nailgun, Bill saving the day and his eyesight (at least the colour bit of it) returning to normal. Happy fucking ending. 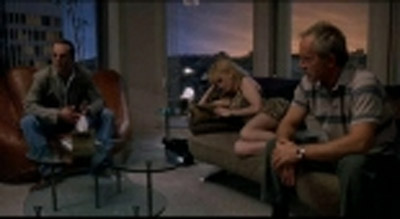 This is a monumentally awful movie. It’s hopeless. March, who is slightly odd looking, exudes sex appeal, and let’s face it is kind of hot. What she does not pass as, under any circumstances is a 17 year old boy with a stutter and anger management issues. That our hero can’t see this induced howls of laughter in me, and every time they appear in any context I was literally crying from it. I cannot for the life of me work out why he’s meant to be so stupid that he can’t see this. Mind you, nobody else can either, and they’re all meant to be porking her too,  so maybe this sort of thing is normal for LA.

It also has a weird contempt for psychiatry/ psychoanalysis. Not that I think it’s worth two shits myself, but in a movie about prominent shrinks conducting anger management groups and whatnot, it strikes me as slightly odd to mention Freud and then have the two “doctors” making wanking gestures to each other. Also, if Bob has just published a book in hot-shot analyst Bill’s field, wouldn’t he know about it? Even if Bob hadn’t mentioned it, aren’t they meant to keep up with the latest research? Fucked if I know, but I suppose he is meant to be the worst shrink in history, despite what he keeps telling us. 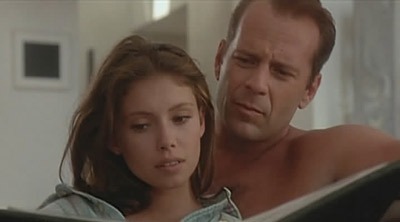 Furthermore, it is weirdly shot. Rush’s last film was made 14 years before this, which ordinarily sets off warning sirens, and was highly acclaimed. Yet now he’s got delusions of art, which is stupid for a skin flick, and as such keeps staging weird shots where the foreground and background are both in focus. I’m not sure what this is called (conti), but I bet if it’s done properly then it’s quite effective. Not like here, where every time he does it it looks like he’s shooting March having a conversation with the back of Bruce’s head. Don’t get me started on the multiple sex scenes here, let me just say that if you ever wanted to know what Bruce’s dong looks like, then this is your film, and it’s taught me a novel use for toy trucks.

Christ, Bruce, now I’m talking to the back of your head, you really did start going bald young.

Nevertheless, it’s, against all odds, hugely entertaining. This is a terrible film, awful in fact, yet I spent the entire run time almost crying with laughter. Almost everything is misguided, inept, poorly thought out, badly acted and so forth, yet strangely hysterical. There’s a great little moment, when Bill decides to see a patient out of hours, little knowing that she’s knocking off Rose. So, Rose is aghast to discover Bill’s on his way, pulls her shit together and runs out of the door straight past Bill, who doesn’t fucking see her. He really does give retards a bad name. However, in terms of sheer stupidity, I don’t think anything tops the ambush by the rattlesnake in the mailbox, which is genuinely hilarious for Bruce’s dumbfounded expression if nothing else.

Overall, this is tripe, but I nearly died laughing, so I’m not going to go anywhere near as low as I should. On any critical, technical or artistic level, Color of Night is an atrocious movie, yet because it’s so inept it has a sleazy charm. Not least of which is due to the inexplicable porno score that the film has. Therefore, because I have to acknowledge it as awful, I’m not going high, and I don’t recommend it, yet because it really is one of those so-bad-it’s-good films, I’m going to go bang in the middle and give it 2 out of 4 of the worst thing I could find on the internet (Rosie O’Donnell in fetish gear). This is a disastrously inept, but truly hilarious film, and I suggest watching it with beer.