Release date: January 31 (US). This film replaced the unavailable Stammheim – which is on youtube but sadly without subtitles and I can’t speak German. Probably would’ve been easy found had it been French. May contain middle-class dysfunction and spoilers…

Flat out, honestly, I haven’t got anything. I watched it in 1987, thereabouts, VHS rental. I remember a fair degree of hype heralding the film as some kind of decade-defining classic, yet being utterly bored by the frantic, neurotic mischief essayed throughout. This time around I figured I’d be better equipped to deal with the themes and whatnot, with 20-odd more years film experience in my pocket… It might be a failure on my part, I don’t know, but Down And Out In Beverly Hills refuses to engage on any level in my head and consequently, writing this overview is tantamount to straining fruitlessly on the toilet. I think it’s the set-up puts me instantly on edge. It screams the entire film; shambling bum Jerry Baskin (Nick Nolte) tries to commit suicide in a posh swimming pool but is rescued by wealthy-but-anxious Dave Whiteman (Richard Dreyfuss) and allowed to recuperate at his luxurious residence for a few days. On your marks for the culture clash, get set… wait for it… Go!

Jerry is like Jesus to these folk. They’ve disappeared up their own arseholes and he fixes them, by deed (shagging) and word (a pack of lies). See, we think Jerry has lived a fuller life than these have-it-alls; he’s far richer with nothing than they are loaded. But his hard luck stories are fiction. If director Paul Mazursky is saying there’s more to life than money well I guess Jerry isn’t so sure about that judging by the ending. Let’s see… Dave is shagging Carmen the maid (Elisabeth Pena) because his wife Barbara (Bette Midler) has got a few sexual hang-ups. Jerry relieves her of that burden by shagging her. He also shags Carmen, turning her off Dave. Then the Whiteman’s daughter Jenny (Tracy Nelson) shows up and there’s some family concern about her weight, she may be anorexic. She’s got Jerry’s number from the off and brands him a “sociopath”. Jerry forces – yes, forces – himself on her (this is both disturbing and grotesque), she caves in to his advances and he cures her eating disorder by shagging her. When this all breaks there’s a big confrontation because nobody’s happy about Jerry dipping it wherever he wants. He hits the street again in a strop – but they really want him to stay and so does he! So what’s changed in Dave’s life? The Whiteman clan are still as fucked up as they ever were. No wonder Once In A Lifetime bookends the film. “Same as it ever was…”

That's what shagging a tramp does to you

And why is the script so coy about Dave’s son, Max (Evan Richards)? His journey is probably the weakest (though Carmen’s journey to oppressed revolutionary is pretty daft). Max may be gay, but the script doesn’t say so. If the script can’t say so, how can anyone else? Of course it may be that Max isn’t gay and we shouldn’t jump to conclusions. He might be using make-up to explore his identity in the ‘Glam’ band he has formed with his equally pancaked friends. In fact, in the interests of consistency, why doesn’t Jerry shag Max? He’s shagged everyone else – except Matisse (Mike the dog), although who knows, maybe it’s a deleted scene. Too often the film relies on the dog to provide the biggest laughs, Matisse is without a doubt brilliant and I just kept thinking ‘more dog, this movie needs more dog…’ I think Mazursky thought that too in the edit; as soon as the action flags – we do get more dog. Cracks me up when the animal analyst hands Matisse a bowl of dog snacks and the barmy pooch abruptly slings it and goes back to staring down the shrink.

Also there’s Orvis (Little Richard), a neighbour of Dave’s who randomly appears at various points in the film to provide physical comedic reactions. He gets an extended rant at police near the beginning concerning their method of response to a house alarm (they only send 1 copper to him – Dave Whiteman gets 20 coppers, a chopper, police dogs, etc). I didn’t feel it would be right to laugh at him here and if that was the director’s intention then it’s a perfectly pitched scene. It’s uncomfortable, not funny. You’re fairly certain Li’l Richard is going to blast out a tune somewhere along the way and he does, soldiering on determinedly while a Whiteman house party descends into chaos around him when Down And Out suddenly morphs into a Benny Hill Show chase sequence. Also introduced randomly are some Iranian neighbours, just to show Jerry’s influence reaches beyond the boundaries of Dave’s home and that he treats all colours and creeds as equals. Fair play to the bloke, I say.

That won't get the hoovering done, luv...

Arguably the most effective section of the film is when Jerry dares Dave to spend a day down at the beach with the homeless. Dave loves it so much he stays the night as well. He genuinely digs the people and wants to hang out with them, sharing a bottle of booze (reticent at first – I mean, there’s the hygiene issue for starters) and talking the hours away. Obviously he’s in a comfort zone, he can go home to a swish house any time he wants so there’s zero risk (unless he gets mugged by a deranged vagrant). Does he reach an understanding of what it feels like to be grubbing around the streets destitute? If he does, the fact isn’t communicated to the audience. But it’s just nice to see Dreyfuss and Nolte get to share a ‘real’ moment, as if they’re at the end of a day’s shooting, just winding down with the setting of the sun and chatting about shit. I liked the bit with the bums bastardizing the lyrics to We Are The World. The satire works well there. Ironically, wasn’t Midler on the ‘USA For Africa’ charity disc? 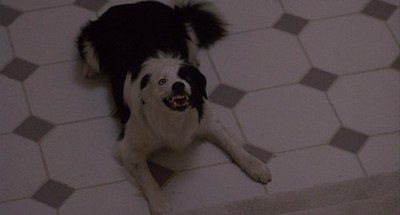 I would say Bette Midler is the stand-out performer here. She doesn’t do anything markedly different but she’s entertaining to watch. Dreyfuss is okay too, holds his own against Midler who did have a reputation for being ‘troublesome’ (and he could be spiky too) but not on Down And Out, I don’t think. I’ve always liked Dreyfuss as an actor though. Nolte absolutely convinced me as a bum (apparently he spent something like 5 weeks on the street to prepare for his role). Once he gets spruced up he struck me as a fraud – I think Mazursky meant that to happen as well. The rest are just there and Mike the dog out-acts all of them put together.

You should probably look out for several in-jokes too, if you’re into that kind of thing. I didn’t know this, but Down And Out is a remake of a French flick called Boudu Saved From Drowning (1932). See, even when it’s not French, it’s got something to do with the French. I can’t seem to get away from ‘em…

Ah, that’ll do. I could’ve switched this off at any point after the half hour mark.