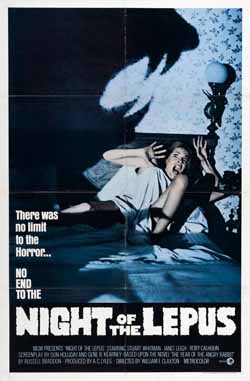 Having hopped back on the terrible film horse last week with the bloody silly Street Warrior, I thought I’d go back in time in the Vault to dig out one of the absolute classics of rancid cinema. I’m not feeling brave enough for exploitation, or anything remotely rapey, at the moment, which ruled out an awful lot of the obvious choices. Instead, I feel a need to watch something nicer, something fluffier, maybe about an utterly innocuous threat that can be heartily laughed at without feeling ill afterwards. With this in mind, I dug up a long lost “classic”: 1972’s piece of epic stupidity Night of the Lepus.

I have a soft spot for this film. It’s fucking terrible on every conceivable level, yet there is something inherently appealing about a premise as downright loopy as this one. Night of the Lepus started out life as an Australian Satire called The Year of the Angry Rabbit, and actually aimed at big targets such as Nuclear War, jingoism and other such weighty themes. I haven’t read it myself, but am assured that it is actually quite funny, albeit a bit grim. Nevertheless, when the time came to adapt it, writers Don Holliday and Gene R. Kearney dispensed with all the comic elements of it, and turned in a straight horror movie. About Giant Killer Rabbits. How they thought this was a good idea is a total mystery, and how they managed to assemble a cast consisting of Rory Calhoun, Janet Leigh, DeForest Kelley, and Stuart Whitman is an even greater conundrum.

What you can’t see is that he’s receiving surreptitious oral sex below the desk. That’s why he’s not bothered by the rabbit attack. That and it’s in Australia.

Opening with brilliantly authentic newsreel footage of a rabbit outbreak in Australia, Night of the Lepus is oh-so-keen to take itself incredibly seriously. Unfortunately, it undermines itself almost immediately by the newsreel containing images of rabbits bouncing themselves into a fence repeatedly, and thereby rendering itself comedy. Once the po-faced News Reader finishes we cut to rural Arizona where local farmer Cole (Calhoun) is suffering from a plague of rabbits devastating his crops. His plan is to basically poison them all with something fecking horrible (I’m not sure this is ecologically sound, myself) and thereby remove the threat from his land. Instead, Dr. Hillman (Whitman) persuades him to allow a week or so for some gene manipulation that will make the rabbits sterile and wipe them out without hurting the environment. Back at the lab, he injects Thumper et al with a top-secret serum developed in Washington by TOP FUCKING MEN, that will, allegedly do the trick. His deeply annoying daughter contrives to let one of the treated bunnies loose, and next thing you know it’s RABBITGEDDON, as the mutant rabbits grow to “the size of wolves” and for some reason that the film never bothers with trying to explain, but all the characters just accept, they all also turn carnivorous. I suppose once you’ve accepted that Rabbits can grow to the size of wolves, swallowing them turning carnivorous is a doddle. Will mankind be able to stave off the evil mutant killer rabbit threat?

“Look mum, I’m in a film with Janet Leigh! No more of that spandex-clad space nonsense with that fat egomaniac for me now!”

This is a blast. On a base level, there are more holes in this script than in the proverbial rabbit warren, and characters frequently perform astonishingly stupid actions (going into the mine where the killer bunnies live to, er, take a photo) for no good reason other than to further the plot. The dialogue is reprehensibly awful, and all the more hilarious for it, with many a brilliant cod-science exchange that the actors manfully struggle to keep a straight face through. I particularly like this gem:

Scientist: “I’ve studied abnormalities and birth defects all my life. It’s come pretty close to home for me. I see them all the time. Naturally, I’d like to believe they don’t exist. Unfortunately, they do.”

Roy: “But, doctor, rabbits as big and as ferocious as wolves? It isn’t conceivable.”

Roy is right. It’s not conceivable. In fact, it’s downright bloody stupid. Much of the problem here is that what we have is a type of nascent eco-terror film. Night of the Lepus has a LOT to say, given that rabbits are clearly a metaphor for human overpopulation and so forth, but nobody involved in the script (or the film in general, although Janet Leigh should know better) had the nous, let alone, damn it, the talent, to deliver on what was clearly a preposterous idea. By draining the laughs from the source material, they’ve nailed their colours to the horror mast, and this is really where the film comes a cropper.

“So what you’re saying, is that it’s offensive if I rest my pint glass on your head because you’re in a wheelchair?”

Horror tends to demand little from the audience. We accept preposterous antics (the girl with the big tits who runs upstairs to hide from the serial killer when she should run out the front door) because these are the beats and tropes of the genre. However, the one feature of a horror movie that it absolutely has to have is an element of terror. Even the worst b-movie creature features have a realised threat. The likes of Asylum may engineer ludicrous situations for Sharks to be in in the likes of Sharknado (incidentally, I’ve seen this, and it’s shit), but the threat is still an animal with a thought process of “=” (as in see it= eat it). Not so here, the threat, such as it is, is comprised of cute fluffy bunnies and it would have taken some stellar special effects to turn them into a scabby bunch of mutants, red in claw and fang.

This is really where Night of the Lepus comes a cropper. The “special” effects. Basically, they clearly had no idea how to realise the rabbits as a coherent threat. So instead decided to make them hop and run through a series of scale models of the Arizona town- as if that now convinces us that we’re watching GIANT FUCKING RABBITS terrorise rural America. While the slo-motion hopping scenes aren’t per se a bad idea, this would only work if they’d managed to find a way to make the rabbits look more menacing and not like someone’s let a load of cute and cuddly pet rabbits out of the hutch. Night of the Lepus is awash with ever so adorable twitching noses, and fluffy tails and so forth- these don’t look like the death of humanity, rather they look like something a 10 year old girl keeps and christens “Mr Snugglybum”. 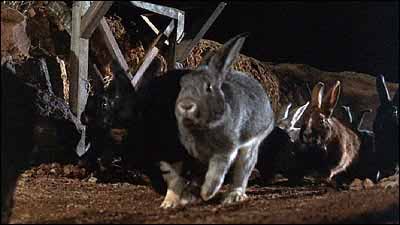 The less than crazed rabbit horde is both the strength and the weakness of Night of the Lepus. Objectively, and on a quality measure, it’s terrible- a total failure of delivery on a fairly high concept idea. However, in terms of sheer amusement, it’s absolute gold. Watching the giant rabbit army hop around with all the inherent threat of marshmallow is comedy genius, and I was almost in tears of laughter all the way through. So, while Night of the Lepus fails as a horror movie, it is an outstandingly amusing time. Yes, the acting may be shite, the special effects risible and the script simply dismal, but this is simply one of the funniest bad movies around.

Overall, I like Night of the Lepus and I’m going to approve it. Watching a cast as good as this one struggle with hideous dialogue in a film where the major threat is ruined through sheer incompetence is an absolute joy. Seeing the teeming rabbit population attack a small town and jump through the window of a shop to attack the owner is hilarious (not least of which is that the rabbits don’t seem to want to actually do this). Watching Bones from Star Trek stare into a big hole in the ground with a look on his face that suggests he’d rather be almost anywhere (other than a Star Trek Sequel) than where he is at that moment in time is almost indescribably amusing. Yes, Night of the Lepus is a terrible film, but it’s because it is played so straight while being so obviously terrible that makes it so amusing. 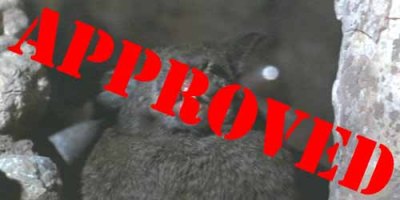 Not sure what I’ll do next, probably something with cheerleaders.

21 responses to “Jarv’s Schlock Vault: Night of the Lepus”