I wish I was dead: Death Wish 5 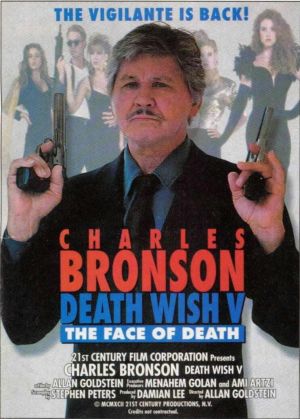 Everyone remembers the Simpson’s gag with an ancient Charles Bronson in Death Wish 9 saying “I wish I was dead, Oy”, and now we’re at the film that it best applies to on my little journey following the Kerse’s violent retribution on Street Punks. Death Wish 5: The Face of Death is the film where the series finally topped out, and is, frankly, a pretty poor way for the Kerse to check out. This is a franchise that should have been put in an old folk’s home after the third installment.

Contains bizarre transvestite hitmen with dandruff and spoilers below.

This time around, we’re back in New York. However, if you remember the end of Death Wish 4 (fuck, I’m not sure I remember the end of it), then Bronson walked off into the sunset having offed head creep with a rocket launcher. So, there’s no repeat of this: 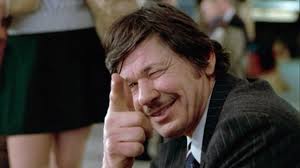 as he’s quite blatantly retired. And fair enough, says I, as The Kerse is well into bus pass age now.  This, actually, is a bit of a problem for The Face of Death, and I’ll come to why in a minute.

Anyhoo, as mentioned, we’re back in New York. Having learned nothing from the trail of dead girlfriends, wives and female relatives left behind him, The Kerse has hooked up with fashion designer Olivia Regent (Lesley-Anne Down), and she comes complete with ANOTHER putative step daughter. Oh, and a psychotic gangster ex called Tommy (Michael Parks). Death Wish 5 follows the increasingly heartwarming family dynamic as The Kerse bonds with the daughter and everyone goes out for milk and cookies. Holding hands.

Nah, not really. Tommy has his chief henchman (Freddy) smash Olivia’s face into a mirror after The Kerse disrespects him, then, just for good measure, he has her killed too. Thereby forcing The Kerse out of God’s waiting room to put other people into God’s waiting room.

No idea what this is

I’m not really sure where to begin with this one. It’s funny, because I watched them all in one marathon session, and this one actually fits in better with part 4 and (weirdly) the original than any of the other sequels. Tonally, it’s very dour indeed, having nowhere near the bugnuts enthusiasm of 3, or the seedy unpleasantness of 2- that’s not to say that there isn’t the odd crazy killing (coming to this), but the total number of creeps offed in this film is only 7. That’s a real step back and I think actually less than the original. Also, this isn’t offing street punks. The Kerse is on a very structured mission of vengeance against Tommy and his Goons (sounds like a late 70’s punk act). So, once again, he’s not dealing with random street creeps, but on a specific mission. I’m dead against The Kerse dealing with upper level gangsters and drugs barons and shit, he’s “The Vigilante”, he’s not some crappy oap Arnold surrogate. This isn’t Commando, for fuck’s sake.

There are a number of serious problems here. Firstly, the writing. Now, this may be because I binge watched them, but it was apparent to me that by this stage of the series with Dead Wife, Dead Daughter, Dead Housekeeper, Dead Mate’s Wife, Dead Girlfriend, Dead Fiancée and Dead Fiancée’s Daughter in his tracks that the Kerse really should be living the life of a bachelor by now. Yet, here he is with another new woman (and daughter) in his life. Still, at least she’s not raped this time. However, having said that, the script really drops a bollock as Olivia knows full well that Tommy is nuttier than squirrel poo (he’s running protection on the garment district where her business operates) with a penchant for using industrial steam presses on people’s faces and yet she happily lets the Kerse off the leash to confront him. She doesn’t even say “Hang on a second, Paul, this is one psychotic bastard, I’d leave it if I were you”. So, really, the carnage that follows is all her fault. 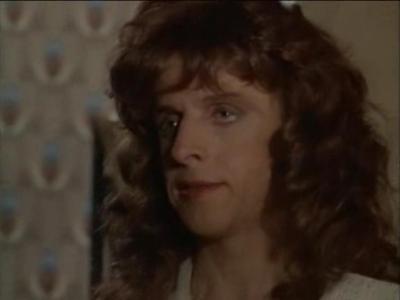 Droid was all dressed up with nowhere to go.

Then there’s Kerse’s relationship with the Daughter, which is weird. I know Tommy is an uberbastard, but The Kerse has killed somewhere in the region of 150 people (and this is just the ones we know about). Yet, he’s bonding with this kid and she sees him as some kind of new father figure rather than Grandpa with a shotgun. Following on from this, there’s all sorts of weird character traits in this film. Take Freddy, for example. Freddy dresses up like a woman to off people, and has a severe case of dandruff. There’s absolutely no reason at all why he has dandruff, it doesn’t inform us of anything, and probably only exists so the Kerse can offer to cure it for him. So really, this is an odd script.

Then there’s the acting, and it’s basically OK, with one exception. I’m sorry to say this, but Bronson shouldn’t be in this film. Bear in mind that he was no spring chicken when the first film was released, over 20 years before this, but he’s clearly now in his 70’s and possibly even late 70’s. The dude just looks arthritic, and I doubt he’s able to clean the streets with blood now that he has to get up 5 times a night to go to the bathroom. On the other hand, Parks is really good fun, and clearly deserves a much better film to fit his villain. Incidentally, there’s a weird touch with Tommy being impotent- again, much like Freddy’s dandruff, this doesn’t give us any character insight because we know he’s a prime grade wanker from the moment we meet him, and it’s not because his winky doesn’t work. Talking about Freddy, he’s a great character and performed well, being easily the most amusing henchman in any of the films so far.

Hahahahahaha. The Kerse is better than head and shoulders.

Finally, on the downside, there’s the pacing. As mentioned, there are only 7 kills, and the first one doesn’t take place until almost an hour into the film. Fuckssakes, this is a DEATH WISH film, I don’t want to wait that long for The Kerse to off someone, and it’s not like the time is filled with him struggling to overcome the dilemma of whether to take up arms again, it’s filled with mindnumbing shit instead. And, now I think about it, the creeps being offed are offed in severely odd ways- one of them’s a fucking poisoning for the love of the flying spaghetti monster. Who on earth want’s to see The Kerse poison creeps when he could be shooting them with ridiculous guns?

So, having waffled on about the downsides to this film, I do have to admit that it isn’t a dead loss. I know I’ve made it sounds like Orangutan of Doom territory so far, but there are moments that elevate the film above the bargain basement. Aside from the obligatory turning up at hospital just in time to find out the person he’s visiting has croaked, that is. The first is a goofy gag where a kid runs into the funeral only for all the mobsters to swing around in the pews and draw large guns on him. This is, actually, a lot funnier than I’ve made it sound and is, really, the sort of thing that should have been in Death Wish 3. Also, on this note, The Kerse gets a radio controlled football from somewhere (why would anyone even sell this?) and loads it full of of TNT. He then pilots it up to Freddy’s front door and detonates the dandruff-afflicted tranny. This is great, and buys the film a lot of time I wouldn’t give it otherwise. The final moment is the Kerse offing Tommy. He gets his hands on a bottle, and breaks it off then carries the broken end around with him for the express purpose of jamming it in Tommy’s face. This is the kind of attention to detail that a good vigilante should have. 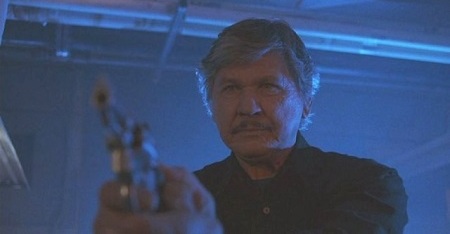 The Kerse was feeling blue

I can’t remember what his relationship with the cops is like. I know they’re around serving as creep cannon fodder in one instance, but they don’t really seem to either help him or get in his way.

Overall, Death Wish 5 is a crap film and a lousy way to end the franchise. It’s dreary for the most part, a bit weird and miles away from the original premise (or even the more gratuitous premise of Death Wish 2). Unlike Part 4, which did at least pretend to take a nod from the classic Western tropes that the first three indulged in so heavily, this one doesn’t bother at all. It’s a simple, straightforward vengeance film, and not a very interesting one at that. It’s also kind of tame. I’m torn on what rating to give it, because it’s obviously crap, but Parks is decent and Freddy gets exploded with a football, so I think I’m going in at 1 Kerse delivering street justice out of a possible 4, and not recommended, although I only recommend the original and the third one (which is the one I’m most likely to watch again).

At least The Kerse had a happy ending here with a new daughter. Although she’ll probably be victim to a random act of street violence and arse painting, knowing his luck. And please, please don’t remake the original.

I’ll think of what series to do next soon. Until then,