Love it when this happens. The film is just another title on the list, but when I set that silver platter spinning, a cross between 1970’s-era TV series UFO and Thunderbirds appeared before my emotionally watering eyes. May contain live action puppets and spoilers…

Brash EuroSEC bigwig Jason Webb (Patrick Wymark) has made an astonishing discovery. There’s a 10th planet in the solar system (obviously, when this film was made, Pluto had yet to be demoted by tossers). Furthermore, the planet is positioned on the other side of the sun and matches Earth’s orbit exactly meaning it is forever hidden from view. Erm, no, but go on. The EuroSEC space agency cannot fund a mission to ‘Planet 10’ (“Trust the Germans to louse it up!”) so in step the wadded Yanks, with the proviso that one of their astronauts goes on the two-man voyage. Enter Colonel Glenn Ross (Roy Thinnes): you can tell he’s American coz his collar is turned up and he’s wearing sunglasses. He is paired with Brit astrophysicist John Kane (Ian Hendry), a reluctant space-farer having to stiffen his upper lip (which ends up all over his face in a ‘vomit comet’ trainer) for king and country. The launch and sleep-assisted journey to ‘Planet 10’ is text book; the landing however, is bumpy to say the least. And most peculiar of all is the presence of Webb, demanding to know why they did a one-eighty mid-trip and returned to Earth…

Right, listen, I can’t do this review without giving the ‘twist’ away so please do pay attention to the spoiler warning up top; if the synopsis has tweaked your interest and you don’t want to know any more, stop reading, ‘kay. Now, Journey To The Far Side Of The Sun (aka Doppelganger) is an oddity. Straight away you are struck by the names of Gerry & Sylvia Anderson and the fact that visually and sonically we’re in the land of Thunderbirds, only without the wobbly marionettes. I can tell you, after Alien Origin, the sight of this unspooling before my eyes had me both excited and purged at the same time. You can see that the Andersons are striving for an adult approach, not least in the marital disharmony involving Ross and his wife Sharon (Lynn Loring, his wife in life), she accusing him of space sterility – “You went up there a man; but you came back less than a man…” – and he waving female contraceptives in her face. Nope, kid-centric this is not. The Andersons also go for spacious mission briefings, and a focus on the hardware, then factor in a couple of trippy sequences and you begin to see the influence of 2001: A Space Odyssey. Thing is, Journey racks up 40 minutes before the journey gets under way and maybe another 20 minutes before they crash-land on ‘Planet 10’. That’s an hour out of a 97-minute flick.

Freud would have a field day with that…

Yep, the film is a plodder, summed up by the beginning; it spends 15-20 minutes setting up the reason why an initially reluctant NASA get in bed with EuroSEC by introducing a character called Dr. Hassler (Herbert Lom, in a small role) and his nefarious activities. Fun though it is watching Hassler fish out his own eyeball in which there is a concealed camera for snapping top secret documents, it’s a lot of unnecessary padding. Alongside the aforementioned marital drama, flight training scenes, lengthy discussions and a barely realised love sub-plot between Ross and security girl Lisa Hartmann (Loni Von Friedl), you begin to think that maybe this strung out, skinny movie would’ve been better served as an Outer Limits episode. Bloody shame, this, coz the film looks ace, plus a lot of the sets got reused for the UFO television series, along with a few cast members too (notably Ed Bishop, George Sewell, Keith Alexander, Vladek Sheybal, Philip Madoc…). VFX guru Derek Meddings delivers some imaginative if totally illogical hardware as he often did for the Andersons and frankly I can watch that stuff all day long. Does the model work hang together with live actors? Depends on expectation, really; if you’re familiar with UFO and the undervalued Space 1999 then it isn’t going to worry you. Billy Filmgoer, however, might be wondering where all the toys have come from.

Mini-skirts were getting shorter…

So, like I say, they approach ‘Planet 10’ and things get padded out some more with a realistic (read: s-l-o-w) weightless sequence in which Thinnes looks very red in the face, probably coz they’ve got him hanging upside down on a wire. ‘Planet 10’ itself resembles Earth with its endless blue and wispy white clouds, but then it seems there’s a very good reason it looks like Earth… Kane is in a bad way after the crash landing so it is Ross, when he recovers, who has to bear the brunt of Webb’s disappointment – well they have just spunked $1 billion on a failed mission to the far side of the sun. Ross maintains his claim that they set feet on the lunar-like ‘Planet 10’, a claim apparently substantiated by the hallucinatory results of a truth serum which baffles the boffins no end. Finally, Sharon is allowed to drive him home but he freaks out coz the traffic is on the wrong side of the road. His mood doesn’t improve on arriving at the house; the bedroom is on the wrong side of the hallway and the light switch is on the opposite side of the door. In the bathroom he picks up a bottle with utter gibberish on the label – ‘ENGOLOC’… gibberish, that is, until he holds the bottle up to a mirror… Ah, you’ve already guessed what’s going on here!

I’d love to report that Journey is a buried gem, but sadly the curse of a dawdling pace, a dour script and a number of inconsistencies regarding ‘Planet 10’ scupper it. For example, take the reversed writing; this detail is immediately and clearly presented to the audience, yet Ross appears oblivious. He must be seeing reversed writing all around his environment, yet we are to believe that he doesn’t attach any significance to this until he gets home? Considering the writing is backwards, how come the mirror-Earthians are speaking forwards, i.e. normally? Think about it, they see a word backwards and then read it backwards! In order to prove to the mirror-Earthians that another Earth exists, Ross flies back to the orbiting mother ship in a modified docking craft (with reversed controls) to retrieve the flight recorder. Mirror-Webb explains how fatally dangerous this is for Ross should the electrical polarities be opposite. Why risk docking then? Just space-walk across to the mother ship, grab the recorder and Bob’s yer uncle. And then a missed opportunity; going with ‘everything is reversed’, why not have Sharon either pregnant or she and Ross already have a child thereby raising the question as to whether or not he would want to return ‘home’…

“Funny story, about this other guy called Kane who landed on an alien planet…”

And that’s the crux of it; the Andersons (and co-writer Donald James) don’t make the most of the ‘Earth 2’ premise. The fact that this is all squeezed into the last third of the film doesn’t give them time to. Also there’s a lack of emotion; for example, Ross never asks about the welfare of his space friend Kane who’s not so much at death’s door but actually wiping his feet on the ‘welcome’ mat. I must also mention the ‘epilogue’, a rather odd bit of business featuring a much older Webb confined to a wheelchair and nattering to himself about no one believing him. A carer parks him up in a hallway whereupon he sees and then reaches toward a mirror ahead of him. Again, one is reminded of 2001 and an old Dave Bowman reaching toward a monolith. Now, I did a little bit of digging and discovered that Journey is ‘told in flashback by an aging Jason Webb…’ Not in my version, pal. Why did they lop out all the ‘old Webb’ scenes except this one? Not only does it render the ‘epilogue’ incongruous, there comes with it a sense of confusion as to where we are; Earth 1, or Earth 2? Not that it matters as we have already been told these events are happening in exact symmetry on both worlds. 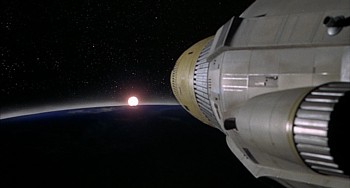 “Ross, the bog’s blocked again – where did you put the sink plunger?”

I’m not gonna have a go at the actors because the characters, as presented here, are cardboard. There are a few ‘read cue card carefully’ and odd mid-sentence pauses, mainly from Wymark and Hendry but that’s no surprise; apparently they were prone to the old ‘liquid lunch’ so it was best to get the tricky scenes done in the morning. Hendry, to note, was once married to the delightful Janet Munro, a fiery match-up by all accounts. Thinnes is okay; do any of you remember him in The Invaders television series? David Vincent. I was allowed to watch re-runs of that as a kid, loved it. Composer Barry Gray dishes up a self-important score that sometimes overwhelms but is otherwise fun to listen to. Parrish’s direction is stolid and so it is a relief that Meddings is on hand to first blast us into orbit and then blow everything to smithereens in spectacular fashion. I’ve also got nothing against the Andersons trying to attain a level of realism (as in the ‘weightless’ section) but in a flick as far-fetched as this one I reckon the script should mirror (pun!) the ludicrous-ity and have a laugh. I mean, it’s impossible for a planet to ‘hide’ behind the sun due to the gravitational effect of the larger planets (such as Jupiter) whereby the orbits of both Earths would speed up/ slow down to ultimately render either viewable to the other. See? Next time someone tells you ‘Nibiru’ is on the way unseen from behind the sun to annihilate us, tell them that. Feel free to add your own colourful metaphor to finish ‘em off!

It’s difficult for me to recommend Journey To The Far Side Of The Sun as a late night time-passer; bit dull if I’m honest. But if you’re a big fan of Gerry & Sylvia Anderson’s televisual output (as I am) then I’d say go for it. If nothing else, you’ve got the recognisable hardware interludes and the satisfying sight of shit blowing up good.

Gonna give it 2 Hood’s out of 5, think that’s fair