Welcome to the Biehn Season, Volume 1 trilogy where I shall pick three classics starring the mighty Michael Biehn. My intention is to tactically swerve around the bigger titles and focus on ‘those we do not speak of’. Of course, me and ‘intention’ rarely share a hammock…

The Biehn. Nothing but love for the bloke. But Jesus H. Christ in a camouflaged jeep, has he fetched up in some dreck or what. Now and again though, he lands a winner – usually anything bunged forth by James Cameron (Avatar 2 needs The Biehn, Jim!). What I did is throw a few random titles into a hat and drew 3. Reckon things could get ugly. Meanwhile, out of Trap 1 flies – Timebomb…

Eddy Kay (Biehn) is a nice guy. His niceness transcends nice and dips a big toe into the warm burbling stream of nice-magasmic. He bicycles to and from work, mends watches, helps neighbours with the gardening, doth rescue babies from burning buildings… There simply isn’t anyone nicer on the planet than Eddy Kay. However, Eddy’s singe-worthy exploits come to the attention of slimy Colonel Taylor (Richard Jordan) who, while engaging in a spot of phone wank fantasy – uh-huh – clocks our boy on the TV news. Seems Eddy’s got a past about to catch up with him. No, this isn’t a dry-run for A History Of Violence. Taylor is up to some nefarious cloak and daggery and Eddy could pose a problem, a problem that ought to be eliminated. Permanently. It isn’t long before he’s being peppered from all directions by super-human assassins (well, maybe not super-human but they’ve got big guns). Also, sudden violent flashbacks drive Eddy to seek professional help from a shrink, Anna Nolmar (Patsy Kensit). And from here Timebomb turns into a stalk & chase exercise as Eddy and Anna dodge a constant hail of bullets while they search for his shady past and try to uncover the dastardly plan Taylor is about to hatch.

There’s a good movie trying to boot its way out of Timebomb but despite some impressive firepower, director Nesher just can’t raise the film above mediocre. He’s aiming for the relentless rhythm of The Terminator, even Biehn latches onto this and launches into Kyle Reese mode after a while. He starts off Sarah Connor-style, pedalling around in blissful ignorance but then ‘Kyle’ kicks in when he arbitrarily decides Anna is setting him up and abducts her in a car, getting all intense and shouty in the process. There’s one really funny, probably unintentional moment when they’re holed up at a motel and Eddy suffers one of his flashes. Anna runs past him to escape but he makes a grab for her leg and the tumbling Kensit cracks her head on the door – ‘tis a fair old wallop! Continuing The Terminator motif, the assassins could just as easily be of cyborg origin, thoughtless killing automatons as they are. They’re all named after colours too, beating Reservoir Dogs by a couple of years. What have you got to say about that, Quentin? Oh, yeh – even Second Street Tunnel makes an appearance (although to be fair it’s been used quite a lot in films).

Timebomb goes at a lightning pace once Eddy has finished spreading a vast acreage of nice around the neighbourhood, but because the film is so stodgily staged it’s impossible to get swept along with the action. Cliché-ridden dialogue doesn’t help matters. The movie lets you know what you’re in for early on when Anna hands Eddy her card (she’s brought a watch in to his shop to be fixed) – “Doctor Anna?” He says, emphasising her profession. Then… “You’re a doctor?” Errr… no, Eddy, she’s a fuckin bricklayer. But this IS an action movie. So, you do get a decent underground car park shootout and despite hand guns that sound like cannons going off, Anna doesn’t hear a bloody thing (no wonder Eddy suspects she’s one of ‘em). Then there’s a calculated hospital invasion where the assassins start mowing down innocent staff. Luckily, our Eddy is more than a match and these so-called hard cases run away like a right bunch of wet ends. Best of all is a fairly taut gun battle in a sleazy porn dive, the heavy huffing on the soundtrack interspersed with deafening weapons fire while behind everyone on the big screen is a girl juggling her tits ineffectively. Honestly, it’s a shite skin flick, any self-respecting pervert would be hollering for a refund. 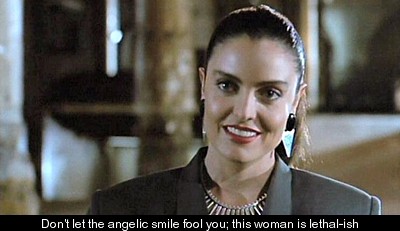 Ms Blue (Tracey Scoggins) is the pick of the killers – though Mr Brown (Billy Blanks) is a worthy aggressor too. She’s got a merciless look about her, you ain’t talking your way out of trouble with this one and it’s a travesty that she’s not Eddy’s rooftop ruffian facing off at the end. There’s a brutal scene when Ms Blue and Mr Brown track Eddy and Anna to a hotel room. After a bit of fisticuffs, Eddy manages to wrap a sheet around Brown’s head and twats him in the face repeatedly with his elbow (but clearly pulling the hits). Then there’s quite a clever bit when he’s after extracting information out of Blue. I say ‘clever’, that’s if Nesher meant it. See, previously, Anna offers a bottle of Evian water to Eddy saying, “Studies prove it will help you live longer…” In the hotel room, Eddy uses the empty bottle as a silencer and shoots Ms Blue in the leg! Cheers. Information extracted, Ms Blue gets to live longer!

How does The Biehn do? Well, he turns up and makes the best of what’s there. With my film head on I’d say that Nesher should’ve cast someone other than Biehn, because it’s just too close to The Terminator. I like Eddy’s arc; he doesn’t turn into a highly trained assassin during his first scrap (like Arnie does in Total Recall), he bumbles around, clouts the would-be hitman with an iron. He’s not confident, displays vulnerability – like when he takes a shower with a pair of pruning shears in hand. But as the movie progresses his reactions improve and become instinctive as the implanted training comes to the fore.

Of course he is hamstrung by that thespian behemoth Patsy Kensit – she’s no Sarah Connor. To be fair she’s not shit here and they do strike up a rapport, but she’s got zero screen presence. The sex scene is an ugly thing to behold, replete with improper music while they embark on a sweaty humping frenzy. There’s something spectacularly unsexy about Kensit lunging toward camera, with a gib depicting either the throes of ecstasy or she’s trying to pass a loaf-sized Soreen. She does get another unintentional laugh; they’ve just discovered a hidden lab where Eddy was brainwashed/ trained and he climbs into a body-shaped cocoon-type thing, his memories now returning. Anna starts pissing around in the control room, pressing buttons, shoving levers – no idea why, it’s not like she’s qualified – and this inadvertently sets the machine off brainwashing him again! Pillock. Actually, no it doesn’t, they don’t go anywhere with the scene after that. Eddy finally understands he’s the same as the people chasing him; a stone-cold killer, whereupon he slaughters Anna. Heh… now that would’ve been a twist, but he does remember his real name. He’s not Eddy Kay at all – his name is Jason Bourne… 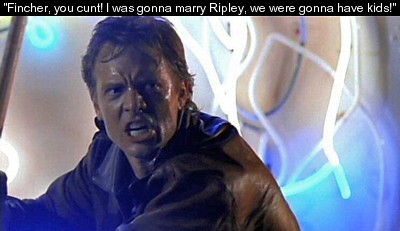 Nah, pulling yer leg. But, what with the Bourne series, A History Of Violence, Reservoir Dogs, then you’ve got the brainwashing capsule that fills with gunk – Wolverine and his adamantium thingy… Seriously, I think Timebomb has been an inspiration to many! Elsewhere in the cast, Richard Jordan, who I like as an actor, is on auto-pilot, stuck with unimaginative lines like – “See you in Hell.” I mean it’s his pay-off line and that’s the best they could come up with? And poor Robert Culp, who you are genuinely pleased to see when he shows up, is shamefully underused. Oddly, on some posters he gets top billing – his screen time is something like 10 minutes out of 90!

So, this being my first viewing of the movie since 1992/ 93, it didn’t quite make me sneer – “Timebomb? More like Shitbomb” this go around. Overall though, flatly directed and uninvolving, but with a couple of decent set-pieces. Booze will help.