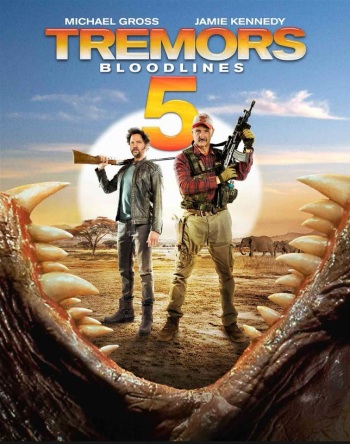 I’m stunned that Tremors has now made it to 5 movies and a TV series. Stunned. Who would have thought the original Jaws in the desert premise could sustain a franchise of this duration- it’s almost 30 years old now, and still going strong. Sure, K-Bacs and Fred Ward abandoned ship long ago, but there’s one man that’s held on: Michael Gross has almost turned Burt Gummer into a cottage industry, and is still playing the grizzled survivalist and paranoid nutter, even he’s approaching Paul Kersey age.

END_OF_DOCUMENT_TOKEN_TO_BE_REPLACED 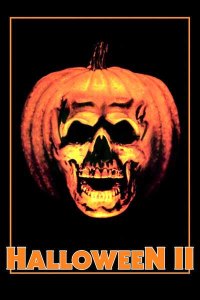 After the stunning success of Halloween, John Carpenter then carried on with his creative hot streak. However, in the interim a plethora of Halloween clones appeared on the big screen and made a vast amount of cash. Thus, it was inevitable that they would return to the seminal original to try to milk the cash cow’s teats. Therefore, it was absolutely no surprise to anyone that Halloween 2 would limp out of the blocks to wow absolutely nobody. What was more of a surprise, however, is that they would continue the story on the same night- no unexplained break here, we’re simply watching part 2 of Halloween. END_OF_DOCUMENT_TOKEN_TO_BE_REPLACED 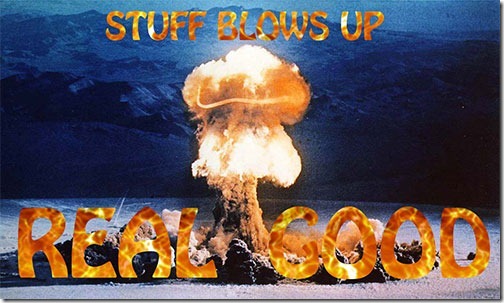 The first Taken film, released in 2008, came as a bit of a surprise. It’s an effective, lean, mean action film elevated by a convincing, driven central performance from Liam Neeson. After a lacklustre 20 minutes (10 of which are entirely unnecessary), the film delivered one of the most gripping, perfectly executed scenes in recent action films. Brian Mills (Neeson) on the phone to his daughter Kim (Maggie Grace) as she is abducted, to be sold into prostitution. What follows is a relentless series of beatings as Mills devastates the Parisian immigrant population in his search for his daughter. It’s pure, grim, visceral thrills, and it’s one of the better action films of the past 5 years. It was also a big hit on a modest budget. Inevitably, we get a sequel. How can the same shit happen to the same guy twice? Well, when you bludgeon to death half the population of Albania, a few of the victims family members may kick up a stink.

END_OF_DOCUMENT_TOKEN_TO_BE_REPLACED 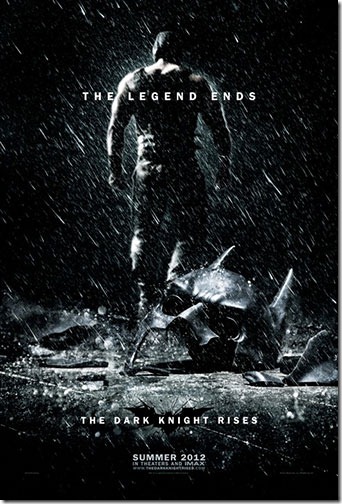 Please be aware, my talents are limited and simply put, reviewing ‘The Dark Knight Rises’ without revealing everything is beyond me. So I hereby provide this very, very important disclaimer.

If you haven’t seen ‘The Dark Knight Rises’, the film will be spoiled for you if read this review.

Now that I’ve protected myself with the official, ironclad online statute of ‘Don’t come crying to me if you ignore my warnings’, on with the review.

END_OF_DOCUMENT_TOKEN_TO_BE_REPLACED

Spanked by the Monkey: Beneath the Planet of the Apes 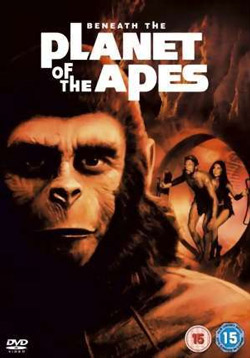 From my brief research into this film, in a vain attempt to find something to write about, I’ve discovered that Beneath the Planet of the Apes is almost universally reviled. This strikes me as unfair. It’s nowhere near as bad as, say, Battle or Burton’s equally hateful remake, and were it to exist in a vacuum then it would be a seriously enjoyable piece of B-level schlock. Unfortunately for the first Planet of the Apes sequel, this isn’t the case and the original film casts a long shadow both over the production of the film itself and the reception to it that Beneath simply isn’t good enough to get out from under.

Serious spoilers lurk below, by the way.  END_OF_DOCUMENT_TOKEN_TO_BE_REPLACED 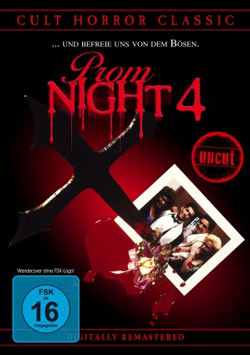 After the relative success of the last two Prom Night films, well, at least in terms of entertainment, it’s clearly time for the series to dive happily into the shitter. The golden rule for the 4th film of a series or onwards is, and forever shall be, if you want it to be good, then you stand a better chance if you SET IT IN SPACE. Prom Night, sadly, decided not to go this route, and instead bought a script off the shelf, tacked on the prom night motif, and turned in an absolute shitburger of a film. It’s not a Prom Night Film, it’s not a Mary Lou film, it’s, in fact, a bit of a steaming turd on the face of crappy horror sequels. And that’s saying something.  END_OF_DOCUMENT_TOKEN_TO_BE_REPLACED 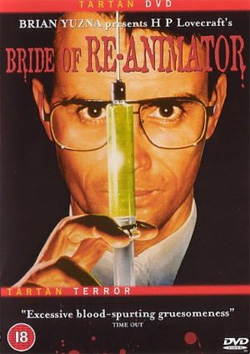 This morbid doodling with human body parts… is this what it’s all about? Is this what all our great work has led to?

Jarv’s Rating: 3 Changs out of 4. This is how you fucking do it: completely loopy, rock-solid slice of deep-fried gold that mashes classical horror references in with some of the most gleefully demented insanity in any horror sequel.

Let’s be absolutely crystal clear from the word go: Bride of Re-Animator has about as much to do with H.P. Lovecraft as Silvio Berlusconi has to do with chastity and honesty. There was plenty of room at the end of the original classic Re-Animator to totally justify a sequel, and in 1990 Brian Yuzna took up the reins and returned with the full surviving cast (and a few undead ones) to Stuart Gordon’s finest hour. Except this time, the decision was made to go for a full-blown comedy. Actually, the film this most reminds me of is Frankenhooker, it’s got the same gleeful sense of stupidity as that film and it could quite easily have been made by Henenlotter- it’s got his sensibilities running right through it. Bride of Re-Animator is, simply put, an absolutely stupendous piece of schlock, a gore filled gigglefest that even the most po-faced gorehound could find some enjoyment in. Oh, and it features notorious decapitated undead cunt Dr. Hill- except this time it features Dr. Hill 2.0: with added cuntishness and bat wings. END_OF_DOCUMENT_TOKEN_TO_BE_REPLACED 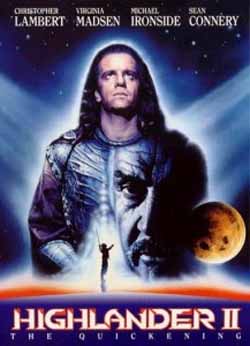 This time out, there’s more of us involved and we’re taking on the sequel to the original hugely entertaining Highlander with Highlander 2: The Quickening. END_OF_DOCUMENT_TOKEN_TO_BE_REPLACED

A title that almost makes sense- Pumpkinhead 3: Ashes to Ashes 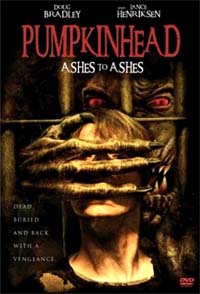 After the utterly abysmal Pumpkinhead 2, I was somewhat trepiditious about continuing with this franchise. You know how it’s meant to go: Stunning first film, mediocre second, passable third, and so forth until you hit “derisory concluding chapter”. Take the Alien films, for example: Alien is classic, Aliens is classic, Alien 3 is very good (fuck you all, I like it), Alien Resurrection is mediocre, AvP is crap, AvP:Rectum was the Moonwolves worst film of the last decade and a franchise killer. Which, while I’m thinking about it, will not be resurrected by that stupid prequel flight of the cock jockey nonsense. Pumpkinhead, on the other hand, bucked the tried and tested formula by going straight from very good to fucking terrible missing out all stops in between. This meant that, in all likelihood, Pumpkinhead 3: Ashes to Ashes would be AvP:Rectum levels of awfulness.

Furthermore, the omens weren’t good for it. There’s a significant time gap between Blood Wings and Ashes for Ashes (always a sign of impending suckitude), and worst of all it was made for TV by the Sci-Fi Channel. Now, Sciffy may be somewhat passable nowadays with the likes of Mammoth, Infestation and Pandorum actually being good films, but back in 2006, even seeing their name attached to something meant that you would be looking more at a Minotaur than a Mammoth.

As if that wasn’t bad enough, it was an absolute nightmare to get hold off, and the version I eventually watched had fucking Swedish subtitles.

No, my fellow Changians, this one did not look good. END_OF_DOCUMENT_TOKEN_TO_BE_REPLACED 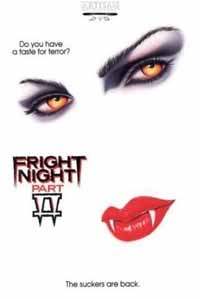 Well, a  touch delayed because of the sheer excellence of the Fighting post, here’s this week’s installment of worthwhile (i.e. non-tween) Vampire films. This time up, I’m doing the grotesquely overlooked and extremely hard to get hold of sequel to arguably the definitive Vampire flick of the 80’s. Welcome to Fright Night Part 2: Electric Boogaloo. END_OF_DOCUMENT_TOKEN_TO_BE_REPLACED