Christ, I’ve been lazy. I’ve got all sorts of entertaining reviews of drivel racked up and ready to go, but I am instead going to review The Guardian’s number 1 film of last year: Under the Skin. This is billed as an erotic sci-fi horror art film, which reads to me like they put a number of movie descriptors into a hat and then drew them out until they got bored. Nevertheless, this is a film I really wanted to see last year, as I like one of the director’s previous efforts (more on this in a moment), the awesome Sexy Beast.

Contains Alien fuckmonsters and spoilers below.

Based on a novel by Michael Faber that I’ve not read, and to be honest not ever heard of, Under the Skin is former highly successful ad director Glazer’s third film. I only mention that he was an ad director because he was responsible for the epic Guinness surfer ad from back in the day. Anyhoo, Glazer was a former bright young thing and man to watch before he committed epic career suicide with the hideous Birth, and Under the Skin has been 10 years in the gestation. So, was it worth it?

This is an Alien Fuckmonster. Just so you know

Charting the antics of Scarlett Johansson’s alien seductress as she trawls around Glasgow picking up men to immerse them in a black goo of doom, Under the Skin seems to be almost singularly lacking a plot. What does happen, instead, is that we witness a series of disturbing set pieces, a lot of intentionally pretentious visuals before an abrupt and upsetting climax. As such, a plot synopsis of under the skin is about as much use as tits on a boar. Sure, it gives you a brief feeling for the events that actually take place, but it doesn’t really aid any understanding of the film whatsoever.

As such it makes writing a coherent review somewhat challenging, and this is exacerbated by Glazer’s style, which draws from Kubrik, Lynch and probably a whole shit load of other influences that I’m probably forgetting. Nevertheless, what this amounts to is an unsettling and mildly unpleasant (in a good way) film that resists both comprehension and analysis. I’m sure that it has lots to say about who we are as people, “under the skin”, and the most successful section of the film would certainly support this guess, but I was left feeling strangely empty after it, and I don’t think it really works for me.

She spends a lot of the film in this state

On the plus side, Scarjo puts in a career best performance as the Alien fuckmonster. She’s ethereal, convincing and downright creepy, having an otherworldly feel that masks her usual total lack of acting ability. And she does full frontal, so there is that out there. She’s well supported by first time actor Adam Pearson (more on him in a minute), and a host of other actors who appear and disappear fairly fast.

The two best scenes in the film are the capture of the guy on the beach and the sequence featuring the physically deformed man. The former is harrowing- with Alien Fuckmonster taking a man in a wetsuit who was attempting to rescue two people. The touch that elevates this is that her handler (a man on a motorbike who never says a word) turns up to collect the guy’s gear leaving the couple’s distraught toddler sitting on the beach crying. This is genuinely viscerally unpleasant, and Glazer’s stripped down style culminates with a lingering shot on the wee nipper’s face as he sits alone in the drizzle. Horrifying.

The second sequence worth talking about, easily the best bit of the film, is when Alien Fuckmonster (I’m bored of typing this now, so she’s now AF) picks up a man with neurofibromatosis. Pearson is the man in question, and is actually a sufferer from the disease. He puts in a staggering turn, more than matching the professional he’s with and summoning up real pathos in the scene. To be fair, though, Johannson also puts in a career best performance during this sequence and there’s some warmth between the pair of them- something absent from what is otherwise a very cold film. If I’m sticking a recommendation on Under the Skin, and I haven’t decided if I am yet, then it’s purely on the basis of this scene.

Other worthwhile sequences are the slow, seductive, stripteases leading the men into the goop, the “ohmigod is that my vagina” scene and the grizzly climax. The first of these is shot “artfully” being almost in total darkness with a spotlight over AF and a focus on the guy as he walks towards her across a glossy black floor that eventually consumes him. This, actually, is fairly indicative of the way Glazer has staged and shot the rest of the movie- it’s incredibly arty, to an almost painful degree in places, and mostly at the cost of emotion and warmth. An Alien Fuckmonster is very hard to relate to and empathise with at the best of times, and a series of random encounters doesn’t exactly give the audience a lot in the way of characters to latch on to.

Overall, I’m torn on this. I have a feeling that it’s a film to admire rather than like, but I don’t particularly admire it either. I think, at the end of the day, that I simply don’t get it, and while I rate the creepy atmosphere and generally good performances it still doesn’t really work for me. I’m probably setting a record for nebulous review criteria here, but at the end of the day Under the Skin is an exquisitely well made and well performed film that doesn’t do a whole bunch for me and is unlikely to resuscitate Glazer’s career. It’s a big ball of meh, I’m afraid and not really a great start to my 2015 reviews. 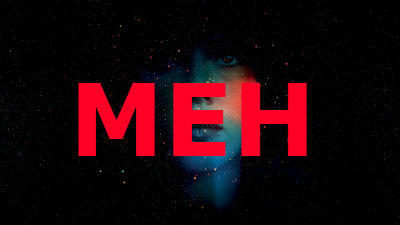 Really, I just don’t like it very much, and feel a bit disappointed. I do think, however, that this is nowhere near the best film of last year.

Still, until next time,