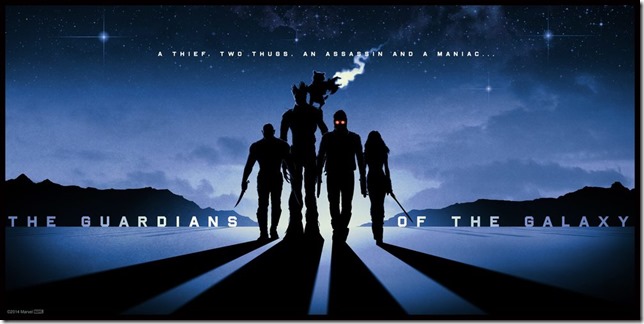 Many thanks to zombie_fatigue for writing up this review of Marvel’s latest exercise in mediocrity (I say sight unseen). Cheers mate.

On the surface, “Guardians of the Galaxy” is a shiny lunchbox of a movie: a cosmic collage of whiz bang spaceship battles, hot ass-kicking alien chicks, and anthropomorphic sidekicks, even if its insides smell of sour milk, fruit roll-ups, and stale bologna. How appetizing you ultimately find it will depend on how much you can stomach the processed diet of your youth. I personally enjoyed it as comfort food, but not nearly as much as I would have as a kid. It’s like a Twinkie, only with a shorter shelf life.

Aside from some quirky elements (talking raccoon, Tarantino-approved playlist, etc.) “Guardians” is not as distinguishable from its Marvel predecessors as it wants you to think it is (or as some over-enthusiastic bloggers actually seem to think it is). Like previous entries, it’s colorful, sporadically entertaining, and expensive-looking. But it also suffers from the same plodding exposition that drags down some of the lesser Marvel movies, delivered via silly/convoluted dialogue that sounds like Scientology refrigerator magnet poetry to my comic book-ignorant ears. At one point, goofball hero Peter Quill (aka Starlord) refers to the object that he is pursuing as a MacGuffin (“I’m getting a Maltese Falcon/Ark of the Covenant vibe from this thing,”  he quips oh-so post-modernly), but that’s wishful thinking on co-writer/director James Gunn’s part. The sought after “infinity stone” is given plenty of narrative explanation and is pretty much the entire reason for the film’s plot. The stone may be of little importance to Gunn, but good luck trying getting that one past his corporate masters at Marvel. Too bad Gunn couldn’t get really subversive and have Quill refer to the stone as “Ovaltine.” 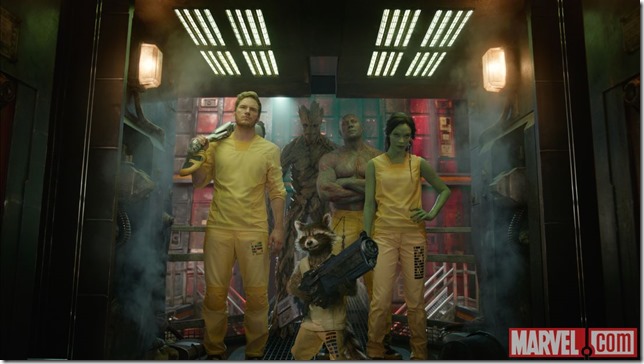 Despite being hamstrung by the obligatory connect-the-dots Marvel-verse business (all things will be explained in 2042!), Gunn and company deliver a fun piece of escapist fantasy. Bradley Cooper does good voice work as the aforementioned raccoon, and Vin Diesel makes the most of his repeated three lines (“I am Groot!”) as a tree dude. Zoe Saldana injects some life into the now stock Ass-Kicking Girl with a Heart of Gold (a cliché which has replaced the Hooker with a Heart of Gold male screenwriter invention for the geek set). Dave Batista (whose natural charm but limited range makes me assume he is a pro wrestler…yup) has some good moments as the group’s muscle. Star Chris Pratt is fortunate to be supported by a more colorful ensemble, because he’s honestly no movie star. Like Sean William Scott a decade ago, Pratt’s wattage doesn’t seem quite bright enough to illuminate a big movie of this size and scope. He seems less like a heroic fanboy surrogate than an actual fanboy: kind of like the guy in the comic shop who is a little more charming and better looking than the other guys and benefits by comparison. 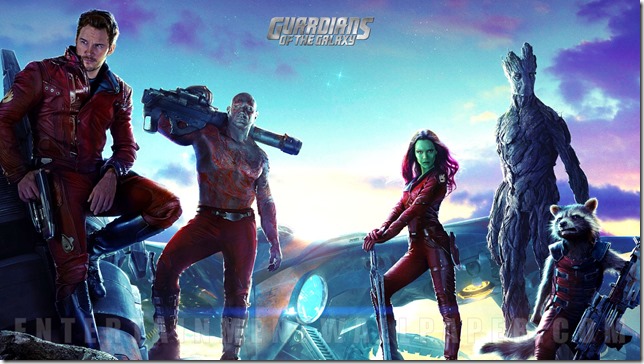 In many ways, Pratt’s Everygeek persona supports “Guardians” working as narcissistic fanboy identification writ large. If “Star Wars” invited us all to be kids again, “Guardians” says it’s ok to be kids now and foreva. After all, not only does Heroguy get the girl and save the universe, he is a child of the 80s (just like YOU, coveted demographic!) and gets to act as ambassador to all things Reagan era, like sharing his awesomely arcane knowledge of “Footloose.” This isn’t fanboy wish-fulfillment. It’s validation. Children of Spielberg, your coronation has arrived. You may still be a slacker, McFly, but it looks like that misspent youth is paying off after all. In the movies, at least.

86 responses to “REVIEW – Guardians of the Galaxy: Space Camp”