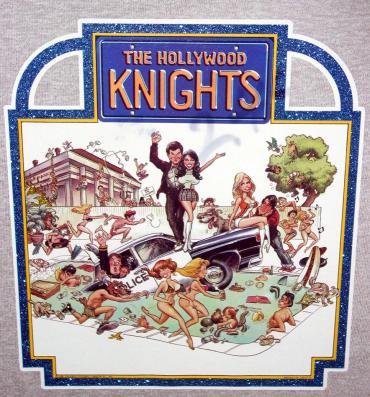 DISCLAIMER: This is a re-post of the very first movie review I ever wrote. I did it at MyMavra.com years ago. Since I am bogged down in writing a review for Veronica Mars and there has been a paucity of posts as of late due to impending births, or actual births, moves general life things and what not I thought I would dust this POS off and get it up. Enjoy as much as you can.

I’ve decided to bust my movie reviewing cherry on a 29 year old movie called The Hollywood Knights. It’s a movie older than a few members of MyMavra.com. Hell, I saw this movie at the drive in when I was 11 in 1980. Why did I decide to review a movie most people haven’t heard of nor probably cares about? That’s easy and the question will be answered in a moment. Now, on to the review I know no one is waiting for with bated breath.

The premise of The Hollywood Knights (henceforth referred to as THK, I’m a lazy writer) is simple. It’s a rip off of George “The Neck” Lucas’ American Graffiti. The set up is easy. We the viewers spend one night following a bunch of alleged teenagers and young adults in a car club in Los Angeles. The night happens to be Halloween, 1965. It’s the last night for a local institution called Tubby’s Drive-In on the fringe of Beverly Hills. It’s where the car club of the movie’s title hangs out. The structure of the movie is three interwoven storylines going on simultaneously. Mostly it’s comedy set pieces and people thinking about their futures.

The main focus, story A, is about Newbomb Turk played by Robert Wuhl. This is Wuhl’s first role in a movie and it’s by far his best work. He’s actually funny in it. The rest of the A story characters are faceless unknown red shirts of the Hollywood Knights car club. They exist to provide Newbomb with foils, set up men in order sell jokes or to move the story along. Most of the funny in THK comes with the A story line. They go around to the big high school rally, The Big Dance and Tubby’s engaging in Hijinks! Yes, I used the words Hijinks. The Hijinks are designed to get back at those who the Knights think are responsible for closing Tubby’s. That would be the local Beverly Hills Home Owners Association and the Beverly Hills PD. The PD is embodied by two of the worst cops in movie history, Officers Bimbeau and Clark.

The B storyline or the “adult story” involves older members of THK. They are The Duke, played by Tony Danza and Jimmy Shine played by Gary Graham. Jimmy Shine is going off to the Army and then Vietnam in the morning. This storyline mostly takes place in Reds Speed Shop next door to Tubby’s Drive In. We also meet The Duke’s girlfriend played by a young Michelle Pfeiffer. Hubba Hubba! This section of the movie is mostly boring talks about the past, the future, relationships and Jimmy Shine going off to Vietnam, blah de blah blah blah. This is the slowest part of the movie. It would have worked much better with more competent actors.

The C storyline involves 4 red shirt pledges of THK. They got dumped naked in Watts and have to get a dedication read on air from a DJ doing a live radio show. They also have to get all the way back to Tubby’s in Beverly Hills from Watts before 2 AM. The pledges get into some shenanigans while in Watts. They’re mistaken for clan members, smoking the spliff with the locals and such. Hilarity ensues.

So in a nutshell, the movie encompasses the past, present and future entwined with the twin themes that the times they are a changing and moving into adulthood. Yeah, yeah all that smarty pants “reviewer” notions about motivation and themes hokum is all well and good but where’s the most important and useful info about the movie? Alright already, here it is… damn people relax!

THK is funny in the crude juvenile way I prefer my comedy. It has boatloads of exposed female juggs (and male for that matter if that’s your deal.) Here’s the most important part of THK, The Cars (yes I purposely capitalized both words.) That’s the reason why I chose this flick to review. 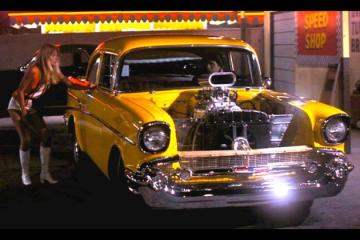 If you are a gear head like me and LOVE classic American muscle cars, then this movie is the Holy Grail. Every scene has something. From Jimmy Shines chopped and dropped 1940 Ford Coupe to The Duke’s shoe box. For the non car liking readers, that’s the 1957 Chevrolet Bel-Air. This particular Chevy is a Project X 57 Chevy. The X 57 is a monster. YouTube it and watch the videos of this car in action. It’s fantastic.

There are about twenty different cars in this movie that are great examples of American muscle. The funniest part is the director and producers didn’t feel compelled to stick to the time period. They stuck a ’67 GTO, a ’68 Ferrari and a ’66 or ’67 El Camino in it. Every car is tricked out to the max. Wild paint jobs, headers, lifters, bored over engines, massive after market carbs, chopped and dropped frames and after market pipes. It’s everything that makes cars cool and not anything like a lame Prius.

If you love cars, breasts and comedy like I do I’m sure you will dig THK. If you object to any of the holy trinity of movies, Cars, Cans and Comedy, then you should skip THK and watch a safe Disney movie.

I hear that cartoon robot movie that eats garbage is allegedly good even though there aren’t any Cars, Cans or Comedy in it. Without the holy trinity involved, I have to wonder, how can it be any good?

18 responses to “THE HOLLYWOOD KNIGHTS REVIEW”