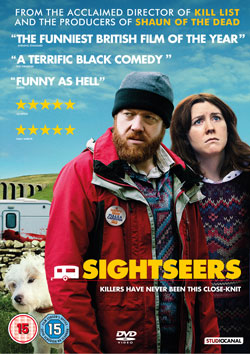 This was one of my most anticipated films of last year, that slipped by me through a variety of shameful cock ups and laziness. Nevertheless, I’d been waiting for Ben Wheatley’s third film since I saw Kill List and he’s currently batting 100% with me as I also really enjoyed Down Terrace, albeit for different reasons than the more visceral follow up. So, the news that he was taking a script written by Darkplace’s Alice Lowe and Steve Oram about a psychotic pair of ramblers had me curious. What would a director such as Wheatley do with a concept that is best described as black as midnight comedy? The answer was last year’s Sightseers.

Tina (Lowe) lives a pretty rotten life. Stuck in a midlands semi with a demanding and vindictive mother (Eileen Davies), she really hasn’t a lot to look forward to. However, things are looking up, as her new boyfriend Chris (Oram) is taking her on a caravanning Holiday. If going caravanning could remotely be accused of ever being something to look forward to. There’s just one minor problem, aside from that Caravanning is a horrible experience, and that’s that Chris is a serial killer with severe anger management issues. Sightseers follows their increasingly psychotic trip around Derbyshire, South Yorkshire and the Lake District as the stresses in their relationship appear and the bodies start to pile up.

Filmed in Cumbria, Derbyshire and South Yorkshire, Sightseers does contain a lot of impressive scenery. Now if only Chris could remember where he buried the hooker.

Sightseers started out life as part of Lowe and Oram’s stand up routine. Actually, both of them are accomplished comic actors (Lowe in particular), and it these are a wryly humorous pair of characters. There’s an element of tragedy underpinning both of them (Chris was just made redundant) that informs their behaviour without actually becoming the focal point. They are, admittedly, ramblers and I mean this in every sense- their “holiday” hasn’t a purpose, it’s just an extended and destination free traipse around some pretty stunning countryside.

This is a film essentially about how mundane evil can be. It was long a joke when I was a kid that if we saw Ramblers on the moors then they were looking for somewhere to dispose of a dead hooker. Sightseers is 90 minutes of that joke come to life. Everything about this couple screams out banality- their dress, him driving a Volvo, their food choices, and, even the destinations they visit, with the arguable exception of the Blue John Mines are mind-numbing. Hell, I went to some of these places as part of school trips when I was young, and can confirm that there is little in God’s own universe more boring than the tram museum. Ultimately, even the murders themselves become banal- Chris and Tina aren’t righteous avenging angels, they’re grubby killers, slaughtering their way through the countryside for the most petty of reasons (Littering, complaining, jealousy, irritation etc). There’s no high motive for their spree, and there’s no real justice being served here. These aren’t romanticised Bonny and Clyde in Gore-tex killers, but are instead the most boring and unimaginatively tiresome couple that you could ever hope to avoid.

Never trust a man with a ginger beard. Particularly not one that insists on standing with his back to the sun.

Both Lowe and Oram are talented, and their performances (complete with grating flat-vowelled Midland’s accents) are pretty much note perfect. Lowe is creepy in a psychotic sort of way, and Oram isn’t so much a figure of towering rage as an impotent and fuming little man with a sadistic streak. They both wrote the script, and the first half contains many genuinely stunning jokes and lines (the “Daily Mail Reader” one used in the trailer is probably the high point). The second half of the film, which really charts Tina embracing the madness isn’t as on point, and much more comfortable when Davies’ tyrannical mother isn’t looming over Tina’s actions and as such the film turns into a kind of extended ramble itself. There’s no obvious destination here. This is cinematic caravanning. Well, not that bad, but you get the drift- the film just meanders along with no real dramatic tension and no escalation of events towards an end telegraphed in the first 20 minutes. 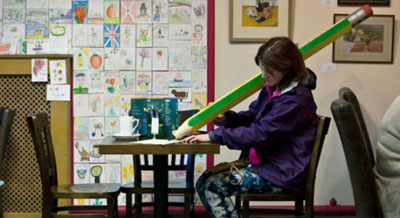 The problem, I suspect, is that Sightseers is a slight film based on a thin gag. It may work as a 5 minute section in a stand up routine, or for a group of 17 year old smart arses sneering at those that participate in that sort of activity, but I’m not convinced that it justifies being spread over feature length. Edgar Wright produced this, and I can see how it appealed to his sensibilities, and for much of the run time it was appealing to mine, but Sightseers really is a very parochial film with a limited audience (I know Droid was far less taken with it than I was). As such, it also feels like a step back for Wheatley and is far less impressive than the brutal assault of Kill List or the relentless misery of Down Terrace. The closest the film comes to either of those two earlier efforts is the murder of the bride to be while a cover of Donovan’s “Season of the Witch” reaches a blistering crescendo, but, alas, this is not typical of the film as a whole.

Overall, despite the tone of this review, Sightseers is a good film. It’s just not the tour de force I was hoping for. There are many, many nice touches here; either visual jokes such as Tina using a ludicrously oversized pencil or in the script (“Yorkshire’s nothing like you said, I can get my favourite pasta sauce and they do smile”), but it all feels terribly lacking and unsatisfactory. Nevertheless, it is amusing and well performed but will eventually go down as a minor footnote in Wheatley’s career. I do recommend Sightseers, as there are far worse ways to pass the time, but It’s not exactly a ringing endorsement.

I suspect, at the end of the day, that this is another film I simply want to like far more than I actually do.

Leave a Reply to Echo the Bunnyman Cancel reply