Get away from him you CUNT!

Beer: the cause of, and solution to, all of life’s problems. Even up to inexplicable squid beasts that crawl off the bottom of the Atlantic Ocean.

There was no way in hell I wasn’t going to love Grabbers. It’s set in Ireland, stars Richard Coyle, who I like from Coupling on the BBC years ago, and features alcohol prominently. Not to mention that it also has giant inexplicable tentacle beasts with a severe attitude problem. Seriously, throw in some gratuitous nudity and a midget or two and I’m in heaven. That it’s also quite a good little film, certainly one that transcends its pathetic budget, is merely a bonus. It does also feature that twat from Being Human sporting a terrible Upper Class English accent, but you can’t have everything.

Contains dipsomania and spoilers below

The Irish complain incessantly about their portrayal in the media as alcoholic layabouts who like nothing more than swilling down a bottle of poteen, 20 pints of Guinness and then smacking each other in the head.  Except there’s two points of note here. Firstly, and I can say this from first-hand family experience, it’s true, but secondly, they love nothing more than spreading these myths themselves. It is, as my relatives say, known as being a “cute hoor”, and they’ve marketed themselves as a “fun loving” nation that’s all about “The Craic”. Cheeky buggers. 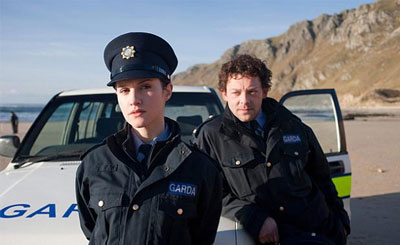 O’Shea using his detective powers of observation on Nolan’s ass.

Anyhow, Grabbers is set on a small Island off the coast of Ireland. It’s a lonely place with feck all to do apart from induce Alcohol related amnesia. They locals are bored, surly and far too prone to a pint. The local Garda (plod) is Richard Coyle’s O’Shea, a functioning alcoholic. He’s joined by Nolan (Ruth Bradley) from Dublin, a workaholic non-drinker spending her summer holidays, er, working. She, accurately, predicts that her arrival will be the signal for everything to go to hell, and no sooner has she said this than two local inbreds bring a tentacle creature ashore. This, unsurprisingly  causes the tentacle beast’s (alright, the grabber) father to come ashore to kick some ass. They literally have no clue how to deal with it.

So, seeking answers, they consult local scientist Smith (Russel Tovey from Being Human and that unspeakable shit Him and Her). A few blunders later and they’ve discovered that said rogue tentacle beast is fatally allergic to alcohol. Thus, coming up with a plan that only the Irish could dream of, they decide the solution to the problem of the grabbers is to get everyone on the island into a local pub and to drink themselves into an outrageous state. On the Garda. In the meantime, O’Shea will forsake alcohol to keep control of the situation, which, frankly, I find somewhat unbelievable- particularly while Non-Drinker Nolan gets absolutely rubbered. Spectacularly and monstrously rubbered, actually. Cue showdown, flagrant “homage”/ rip off of Aliens (the line I quoted at the top is delivered by Nolan while in a digger just before she piles into the grabber), and dead tentacle beast.

“Using my powers of detection, I have come to the conclusion that this while is, in fact, fucked”

This is fun. That’s a very underrated quality in movies nowadays. Particularly British movies. No misery porn here, instead we’ve got a heavily stereotypical Irish village and it’s all about the craic. I’m all for this approach to schlock, actually, and would far far rather they did this than some po-faced nonsense where the locals indulge in alcohol in misery before a light spot of domestic abuse. It’s also entertaining- which I suspect is the point, and while it has its tongue buried so far in its cheek that it can taste yesterday’s breakfast, that’s not necessarily a bad thing in this instance.

The acting from Bradley is OK. Not bad, actually, and her character is reasonably likable. Coyle does a decent and not too “japers” Irish accent, but he’s good at accents. However, Tovey fucking stinks. He is actually English, so Christ alone knows what he’s doing with that horrible psuedo-Queen’s English accent. He’s also the most annoying character, and simply doesn’t have the chops for the “eccentric scientist” role he’s been given. Unusually, I can think of an instant replacement who would have improved both the film and the role exponentially: David Tennant. Grabber- makers, consider that an open goal missed.

The grabber made a fatal mistake by invading Ireland when it’s fatally allergic to alcohol.

The Special effects, while very CGI heavy (for obvious reasons) are startlingly good for this sort of film. I’d say, actually, they are better than those in New Dr. Who- which has a fucking huge budget per episode as I recall. I wouldn’t be surprised to find out that Grabbers has a smaller budget than a single Dr. Who episode. The creatures themselves are an entertaining design, but I particularly like the way they move on land. It’s well thought out, actually, with them rolling rather than walking on their tentacles, and I suspect was probably thought out due to budget limitations.

It’s not all roses, though. Grabbers is a one-joke film (let’s get pished) and an idea that’s a lot funnier in one sentence than it is spread over feature length. There’s no tension at all in the early scenes, and the attempts at clever dialogue are blatantly aping the mighty Tremors without being a fraction as good. There are exchanges between O’Shea and Nolan that have the air of Val and Earl to them, but neither Coyle or Bradley are remotely as good as K-Bacs and Ward. Considering Tremors is the clear model for a film like this, I also find it incredibly odd that there’s no Burt figure- O’Shea and the rest of the locals simply aren’t capable enough to fend off the beast. That they do is down to a series of flukes and some very schwonky writing. 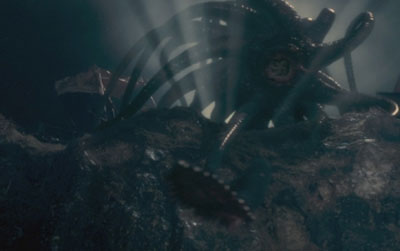 Yikes! What the feck is that? Oh, it’s a member of the league against alcohol post-shedding it’s human skin.

Nevertheless, there are a few genuinely cracking sequences. Nolan’s drunken trip through the pub to retrieve the keys while fending off baby grabbers is solid gold and performed with real chutzpah by Bradley, and I did laugh out loud at the sequence where Nolan, O’Shea and Smith beat a grabber to death while Smith mourns the loss of a beast that could “teach us so much”. Smith’s death, actually, is hugely satisfying and thoroughly deserved, even if they are trying far too hard for a Samuel L. Jackson Deep Blue Sea check out.

The pub sequence itself is a blast. Watching the locals all get totally shitfaced while blissfully unaware that there’s a legion of oceanic tentacle beasts coming for them is highly amusing. The choice of music (Whisky in the Jar and the greatest hits of the Dubliners) is a bit much- it reeks of stereotyping taken to an extreme. This, I suppose, does fit in with the mentality of the film (honestly, they’re as stereotypical a bunch of drunken paddies as can be imagined), but there are other “Oirish” musical options available without resorting to that.

Overall, I had fun. Can’t really ask for more than that from a film like this. The idea is funny, but can’t really be sustained over a feature, and the cast are likable and trying their best. The effects are better than they have any right to be, and there are a number of sequences that buy the film a lot of time when it is beginning to sag. I do recommend this, but be warned that it isn’t remotely in the same class as Tremors etc- although it is still one of the better recent monster movies.

It’s all about the Craic, really.