Jarv’s view from the couch returns!

It’s been a while since I’ve reviewed anything due to crushing work pressure and the fact that I’ve knackered the home PC. So, in a lame attempt to at least update every now and again, I’m resorting to our Spanish lap top. Which is fun, provided I remember where the quotation marks are.

Anyway, I’m still not watching a lot in the way of films, seeing as Lovefilm has seen fit to put basically every TV show ever made up on free to view. So, as a result I’m picking my way through TV series. You know the drill for this by now: a handful of mini-reviews of whatever series I’ve watched recently. Usually a mix of the good, the bad and the downright rotten.

First up this time is actually the best series of everything that I saw last time but just, like a dickhead, forgot to include in last time’s round up. I give you the insanely controversial and frankly fucking awesome Brass Eye. 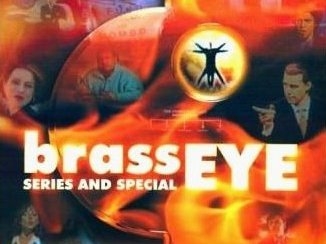 How did I forget that I rewatched this?

Brass Eye, for those across the pond was probably the most vicious satire of the late 90’s/ early 21st Century. Spawned by Chris Morris from his satire of the news (The Day Today), Brass Eye masqueraded as a topical news/ current affairs programme. Morris hosted (and played a number of other parts), and each week focused on a hot topic.

Roping in the great and the good to make utter dimwits of themselves, each episode was a mix of fantastical news stories, humiliation of celebrity types and a blend of scabrous and evil humour masquerading as straight talking. A brutal and coruscating satire of the media (this will be important in a minute), Brass Eye was one of the seminal comedy series of my teens/ early 20’s. A series that has, frankly, passed into legend.

How good was Brass Eye? Well, it’s a satire, and a comedy, and yet it was so effective that Morris managed to gull a politician during the “drugs” episode  into asking a question in parliament about the prohibition of an imaginary drug called “Cake”. It was one thing conning celebrities into looking at the camera and saying things like “Remember kids, don’t eat cake” but to actually get it into the House of Commons was absolutely unprecedented. That he even managed to get the attention whores to read out sentences such as “Cake is an entirely made-up substance” and that it stimulated a part of the brain called “Shatner’s Bassoon” without spotting something was up shows the sheer subversive genius of the man at work

However, as is often the way, Morris and Brass Eye fell from grace.

The point of Brass Eye was a pisstake on the media, particularly the hysterical way they manage scares, and to savage the famous people who jumped on board the bandwagon without putting any thought into it. The original 6 episodes were an unqualified success. However, the Brass Eye Special, while arguably the crowning glory of the series, was a totally different kettle of fish.

The subject of the special was the media’s treatment of paedophilia. Now, note carefully that it isn’t paedophilia itself he was taking the piss out of.

At the time, the British Media seemed to be tripping over themselves to put out “Pervert on every street corner” headlines that bore little or no relation to reality and were, if I was to be extremely generous, scaremongering and pandering horseshit. Morris and the Brass Eye team looked at this, and rightly thought that it was open to satire. Thus the “Paedo Special” was born- unleashed would probably be a better term for it. What they did here was honestly like launching a turd into a swimming pool and standing back to see what the reaction would be.

The reaction was predictable, and in its vehemence vindicated Morris’ point. The media as a whole was relieved to have a chance to put the boot in, and so became unable to tell the difference between what he was actually taking the piss out of (i.e. them) and the grim subject matter itself. It even got as far as the home secretary condemning it- sight unseen, obviously. Well, it would be sight unseen, given that he was blind. Nevertheless, Morris and Brass Eye were absolutely slaughtered in the press.

The thing is, though, that there was a significant gap between the original series and the special, and Chris Morris and Brass Eye were hardly unknown quantities. So, the special itself came with the same faux-news jokes (Paedo spotted in Cardiff disguised as a school), humiliation of celebrities (that twat Dr. Fox on camera saying that Paedo’s share 98% of their genes with a crab. There’s absolutely no scientific evidence for this, according to Fox, but it is a FACT), and very funny staged Panorama style news events- with Morris himself at the center conducting affairs like the ringmaster from media hell.

Funny as hell, scabrous, dark and evil, the paedo special was not only a brilliant piece of television, but the reaction served to underline the point Morris was making about the media being full of arseholes. Brass Eye in its entirety is a magnificent achievement, and if you haven’t seen it, I would suggest digging it out, because it is so close to the bone and so accurate that it is still relevant even now- over a decade later.

Simply some of the best television this country has ever produced.

Unlike the next series to be reviewed. Alcatraz:

This, on paper, isn’t a bad idea. Playing in Fringe territory, Alcatraz is about the disappearance in the 60’s of the prisoners and their reappearance in 21st Century San Francisco.

Starring Robert Forster, Sam Neill, that bint from Bend it Like Beckham that isn’t Keira Knightly, the fat cunt from Lost, and some blond woman I’ve never seen before (and suspect I’m never going to see again), Alcatraz is simply awful TV that fully merited the axe.

The problems here are huge. Firstly, structurally, it tries to be all things to all people by basically being monster of the week mixed in with flashbacks of the 60’s that allegedly tell the overarching story and reveal the secrets underpinning the premise.

Unfortunately, by the half way stage of the series, I had a strong suspicion that they didn’t know what the secrets that underpin the series are. It struck me that this was Lost redux, with confusion and obfuscation masquerading any attempt at a coherent narrative or satisfying story arc. Listen, yank TV types (and film types if Prometheturd was anything to go back), being superficially difficult to penetrate is not the same thing as being deep. So fucking stop it.

Also, please do try to realise that you don’t fucking have a god-given right to 10 series that go nowhere. Try to (as Supernatural did in its most successful series) tell an entire fucking story a year, but leave it simultaneously open to continue in the future. Do not just randomly throw ideas at the screen to see what sticks, because all that does is make it apparent that you haven’t got the first fucking clue what you’re doing.

Then, try to use your fucking brains when you’re writing. Let me give you a clue: a police detective in San Francisco would have to be inordinately stupid, even by the standards of police detectives in San Francisco, to not know that her fucking grandfather was an inmate in Alcatraz not a guard. Furthermore, given that it took her about one second to work out that the man she called her “Uncle” was actually her grandfather’s brother, I suspect this would not have come as a surprise to her either. Then, kindly, do not launch my suspension of disbelief into the stratosphere by casting a British Indian woman as a Prison psychiatrist in Alcatraz in the late 50’s. Furthermore, do not compound this cretinism by trying to make out that she’s a fucking Oxford graduate. This is horseshit.

Alcatraz was a colossal misfire, an annoying, frustrating and just plain shit waste of time. Frankly, it deserved the axe, and I’m fucking pleased it got it.

Lost-lite in the very worst way, and inevitably going to split off into about 50 different parallel universes or some such honk had it continued, this series was a shocking waste of both Forster and Neill. Shocking.

V: Episodes watched- 3/4 of the first one. Then I couldn’t take it any more. What a terrible load of honk

The original series V scared the bejesus out of me when I was about 4. The woman eating the hedgehog genuinely gave me nightmares, and I can see why it would be attractive for a remake.

The only episode I endured (so bad I couldn’t even give it 4 to bed in), was stuffed full of cardboard cut out (and severely unlikeable) characters, crap motivation, and sheer stultifying boredom.

As pompous and full of its own importance as Battleshit Galaxative, the “pilot” episode really should have been the death-knell for the series. Yet somehow they got 2 years out of it.

That’s TV done for a while,

12 responses to “Jarv’s view from the couch returns!”