It’s been a while between reviews, the last one being ‘Taken 2’ all the way back in October last year. This has been equal part laziness and part real life interfering. Okay, unequal. I’ve been mostly lazy. No surprise there. But I’m back now, and I intend to review on a more regular basis. To kick the resurgence off I bring you a Droid Premiere! Tom “The Running Man” Cruise’s foray into post-apocalyptic science fiction, ‘Oblivion’. 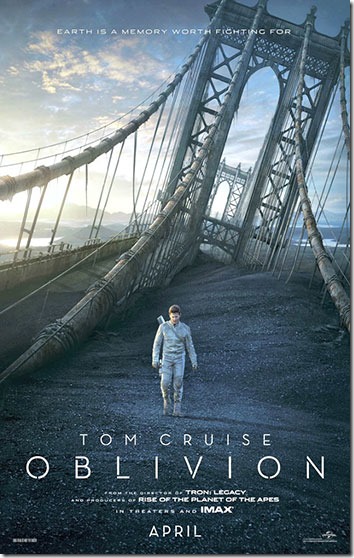 It’s the year 2077 (I think) and the earth is decimated. 60 years prior, an alien race attacked our ball of mud and a devastating nuclear war ensued. We won, but at the expense of the planet. Just outside earth’s atmosphere is the space station TET, which is the command centre for humanity’s relocation to Titan, a moon orbiting Saturn. Down on earth, two humans remain. Jack (Tom Cruise) and Victoria (Andrea Riseborough) are the security and maintenance crew for the battle drones that protect enormous machines sucking up the oceans to create power for the Titan colony. Small clusters of the alien race survive on earth and still pose a threat to Jack, Victoria and their mission. But when a NASA shuttle carrying humans in cryosleep crash lands on earth, Jack discovers a larger conspiracy and uncovers the truth about himself and humanity.

I’ll cut to the chase, ‘Oblivion’ is not great, but it’s good. Directed by Joseph Kosinski, he displays the same knack for slick imagery he previously showed us in ‘Tron Legacy’. But unlike that empty vessel, ‘Oblivion’ has a more engaging story. Based on his own graphic novel, the screenplay credits boast heavy hitters like William Monahan and Michael Arndt, and the film deftly sets up its world and gradually reveals a satisfying conspiracy. There are obvious parallels to recent films, namely ‘Wall-e’ and ‘Moon’, but what this film mostly resembles is the video game ‘Portal’. Both in design and content. If you’re unfamiliar with the ‘Portal’ games (as I assume most of you are), the film will feel much fresher than it did for me.

The film succeeds despite the familiarity for a few reasons. For the most part, it’s very easy on the eye. The tech in the film, from the battle drones and ships, to the inhabitant’s sky high dwelling, look (purposefully) designed as an extension of the ipod. All white and silver, curved body and rounded corners. The scorched earth and the wreckage of human civilisation is seamless, and a secret lakeside retreat is sumptuous. Visually, Kosinski knows what he’s doing. However, the film spends so much time in this barren wasteland with nothing but scorched earth and battle drones that it starts to become a little monotonous. The nature of the story demands this, sure, but I also think the film could have benefitted from a trim here and there. The story unfolds at a methodical pace, interspersed with well created set pieces. A little urgency in the editing room could have been beneficial.

Acting wise, Cruise carries the show. He’s on screen 80% of the time and while you’re always aware you’re watching Cruise, he’s a solid actor at the worst of times. One of the last of the “name above the title” stars, like Arnie, Sly, Bruce, Pitt, or Clooney, he’s incapable of disappearing inside a character. You always know you’re watching Cruise fighting aliens. Or Cruise thwarting terrorists. Or Cruise runnin’ real fast. It’s just how it is, and if you don’t like Cruise then you’ve really got no business watching any of his films. Here he delivers another solid leading man performance.

Also solid is Riseborough as Victoria. Hers is a difficult role, for reasons better left undescribed (potential spoilers abound), but she carries it off. Less successful is Olga Kurylenko as a surviving astronaut who is more than she seems. The character is slight, more an instigator for plot development than anything else, which doesn’t help. She doesn’t have the screen presence or charisma to elevate an underwritten character and remains a “love interest” and little more, which is a shame. Morgan Freeman, brings his usual authority and gravitas, but again, the character is underwritten.

As mentioned earlier, ‘Oblivion’ is a pleasure to watch. The effects are seamless, and the action set pieces, particularly a canyon chase sequence, are especially well done. The film creates a wasteland of scorched earth and destruction and for the most part, you are invested in the characters and story. A little tinkering here and there and the film would be up there with the films it will inevitably be compared to.

Since a film that relies heavily on key third act revelations is mighty difficult to review warts and all, I’ll wrap up by saying that despite the overly critical nature of my review, I did enjoy the film quite a lot. ‘Oblivion’ is one of those “big screen” films, with the widescreen 235:1 aspect ratio making it a feast for the eyes. If you’re interested in seeing the film, I’d definitely recommend seeing it at the cinema.

I hereby assign ‘Oblivion’ a rounded up three little Portal men out of four. I say rounded up because I would probably give it about a 2.8.