This is the beginning of a periodic series featuring the wonder and pageantry of decades-spanning science fiction cinema. We kick off down the well-trod path of abnormally ginormous creatures and who better to direct us, ‘Mister BIG’ himself, Bert. Anyone even slightly arachnophobic should look away now; anyone who hasn’t the patience for cack flicks should probably put a swerve on as well… May contain a blatant bat-murdering Sheriff & spoilers. 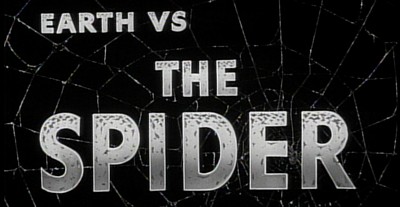 The title is a misnomer; I can state with confidence that Earth is categorically not waging war on a giant tarantula (that’s transhler in Manc). I’m saying ‘giant’, right, but the eight-legged freak seems to be undergoing a fluctuating size crisis (more on that shortly). Now, I believe the original title is simply The Spider and I can’t think of anything more succinct; the person who came up with the Earth Vs bit, I’m not entirely sure what version of the script they perused but I’m presuming it was a draft far more ambitious than the budget would allow. Or else Earth Vs just sounded cooler. Frequently hopeless, The Spider manages to make even the scant 72-minute running time stretch to an eternity so it’s fortunate one can find a few laughs along the way, obviously for all the wrong reasons. The movie begins promisingly, a bloke tooling down the road in his car, well pleased with himself after buying his daughter a lovely bracelet for her birthday when he is rudely poked in the face by a hairy off-screen appendage. From here this whole farrago slides rapidly downhill.

The very next sequence introduces us to Carol (June Kenney) fretting about the fact that her father didn’t come home last night. Uh-oh… We’ve already seen the bracelet with a ‘To Carol’ printed gift card in the prologue so when boyfriend Mike calls her by name our fears are confirmed. Tactless Mike (Gene Persson) is not altogether sympathetic to the news and what’s incredible about this scene is they almost have the same conversation (including predictable outcome) twice. I can’t recall the exact dialogue now so while I’m going to exaggerate, the following is more or less the gist of it…

‘Mike, you bastard, how could you!’ Carol rushes off in a strop. A sheepish Mike catches up with her. She looks into his eyes, smiles and melts back into his arms.

‘He said he’d be back before dinner but he still hasn’t come home.’

‘Pffff! That doesn’t mean a thing, it’s not the first time…’

‘Mike, you asshole, how could you!’ Carol rushes off in a strop…

“Gosh! It’s another victim of the serial skeleton killer they call Jason!”

The writers must have scribbled the first exchange, gone for a celebratory gin, forgot what was written when they came back and wrote it again! Carol & Mike go looking for her dad and Mike gets to use his powers of deduction when they happen upon a piece of ‘sticky rope’ strung across an outlying road, pieces of car windscreen and Carol’s discarded birthday gift. ‘Looks like there was an accident… a guy driving along last night hits this rope, skids, smashes into a tree, he gets decapitated going through the glass and his mangled body pecked on by crows…’ Then a light bulb goes on over his head; ‘Say, maybe this is what happened to your old man!’ He announces cheerfully. If that wasn’t enough, the pair then set off into a nearby cave on the notion that Pops may have, y’know, crawled away from the main road where help might arrive to go and die undiscovered in some dank hole. “I can’t see!” Carol wails before deliberately jumping off a ledge – not slipping and/ or falling – jumping. What’s humongously funny about this bit is Mike, traumatised by Carol unexpectedly leaping into a void, does exactly the same thing! And finally the spider appears, as our deadly duo has unwittingly leapt into a web (and before you say ‘transhlers don’t spin webs’, they do produce silk but it’s irrelevant here).

The spider emits a chilling sound, suspiciously not unlike that of a bloke with his gob way too close to a microphone after having swallowed Domestos and trying to sing My Heart Will Go On. They evade the overgrown arachnid – pay attention here, I’ll be coming back to this – by climbing down through the web (I say ‘web’; it’s a net, really) and hare off back to the entrance. If you think the adults will apply a sane approach to dealing with a giant arachnid, there’s more chance of Oscar Pistorius signing a petition in support of gun control. Professor Kingman (Ed Kemmer) is the resident spider expert who instantly accepts the outlandish story pedaled by Carol & Mike. So knowledgeable about all things arachnid is Kingman he refers to the spider as an ‘insect’ on more than one occasion. Sheriff Cagle (Gene Roth) of course doesn’t believe a word from these kee-razy kids – “A giant spider, what next?” He cackles. Erm, a giant spider, mate. But not before hot-shot Cagle has expertly gunned down an innocent bat for no more than, um, having the temerity to fly around in a cave. Pops is discovered, his body drained of fluids and after a spot of slapstick the spider is dealt a crushing blow with a dose of presumptuously arranged DDT. 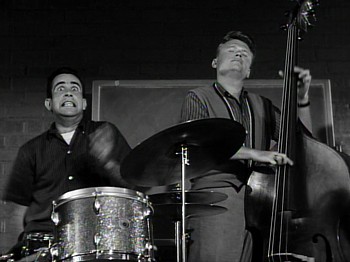 But wait! In actuality, Itsy-Bitsy has merely fallen asleep (no doubt listening to spidey expert Kingman took its toll). Kingman and his cohorts put the ‘dead’ arachnid on display in a recreation hall at the school. This displeases the school band because they require the use of the hall to rehearse for the ‘School Hop’ or something. Them and a bunch of dancing fools are largely unperturbed by the presence of a giant dead transhler, though a degree of concern is evident when it starts walking around. None too keen on the musical din on offer, the spider goes on a mad ‘un and chases the kids out but the caretaker manages to lock the door behind them, even though it’s clear no school hall can hold an infuriated oversized spider. Here’s the thing, he makes an emergency call to Kingman from a phone outside the room… Why didn’t he choose a phone at a safer distance, like an office down the corridor and round the corner? Splat. The giant spider, not all that giant in the hall while being gawked at by the humans, goes on a rampage through the town. This bugger is now dwarfing two-storey buildings and would never fit in a piffling recreation hall – how did that happen? This passage of play is brightened by Kingman repeatedly hollering, “Get off the street! Get inside!” Listen, Kingy, I think the locals are pretty much aware of that initiative already.

Size matters… apparently not to Bert I. Gordon it doesn’t…

Things do liven up here briefly as the spider wanders around for awhile before deciding to sit on Kingman’s house, trapping his wife and child inside though with little sense of danger. It all ends gloriously with Mike and Carol returning to the cave to look for her birthday present which she managed to misplace on their last excursion in there. I mean, fair enough, at that point they believe the spider is deceased, but you’d think they might want to put the cave behind them for a couple of days, or at least wait until daylight… No. Let’s go look for a bracelet in a vast and dark cave system, at night, without a torch (cleverly, Carol points out the existence of a helpful ‘luminous algae’ on the cavern walls). Not necessary in the end because after a lot of ineffectual trudging, Mike simply comes to a standstill in befuddlement and then goes ‘Oh! Look!’ The bracelet is directly at his feet – how convenient. Did Orci & Kurtzman write this? They get lost (‘luminous algae’ for the lose then), get back on track by finding the web again – remember the web? – climb into it, get stuck and lo, the spider returns. If you recall, they escaped in the first instance by climbing down through the web and heading off to the entrance; why have they climbed into the web? Anyway, the cops ditch the DDT and dole out the dynamite; it still won’t be as easy as that though…

“Oh, no… it’s the Pope! I guess nobody retires from God and gets away with it!”

There’s no indication as to why the spider exists in its giganticated form, this despite a scene between ‘Bug Brain’ Kingman and ‘Bat Fucker’ Cagle in which having ruminated on a world infested by Empire State Spiders and professed the need to study the ‘dead’ arachnid to stop such a thing from ever happening, the former solemnly intones; “They would be our masters, they’d live on us…” This implies we’re going to see a nest of these things in the cave and we’re going to find out what’s causing the mutation. However, despite the set-up, the content of the conversation remains unexplored. All we get is a spider running amok for no reason. I’m not saying there has to be a reason, just don’t set it up if you’ve no intention of going there.

Shamelessly, Bert I. Gordon advertises his own output during the film, notably The Amazing Colossal Man and Attack Of The Puppet People, the latter of which Mike wants to watch rather than scrabble around in a cave with Carol (I would too). Overall, faintly enjoyable rubbish, but it’s not always enjoyable and mostly just rubbish. And why do I keep having visions of composer Albert Glasser beating back a horde of production staff who are trying in vain to wrestle a theremin off him?