We’re running out of patients!

I’m going to break out the world’s smallest violin here.

I was due to spend this Christmas with my family in Scotland. This, at the best of times, is a horrifying prospect, involving arguments, enough Scotch to kill a small island, more arguments, shite food and I have to take the train for the privilege. However, due to a contact lens related disaster, I had to disembark the train at Newcastle and go to casualty. The lens had gone bad, and had sealed itself to my eye. As such, it had gouged the surface of my cornea, and I couldn’t get the bastard out. Anyhow, the Doctor removed it (made a sound like velcro when he took it out), gave me a telling off, and made me come back in the next day (Christmas Eve).

So, what has this got to do with a shady little B-Movie? Simple, he prescribed me three sets of eye drops and ordered me to stay up 24 hours putting them in every hour on the hour. This would, I felt, be a challenge as I was bound to be half cut and ready for bed. There was but one solution: watch any old bollocks on TV and hope for the best. So, at 2AM on 24th December, your humble narrator was sitting in a severely uncomfortable chair, shivering in a room with no heating watching Candy Stripers on The Horror Channel. This is by far the most stringent test that I’ve ever put a schlock vault entry through. The goal was simple: Candy Stripers had to be entertaining enough to stop my dozing off.

You want to see what she uses to take your temperature. And then pray she uses it on someone else.

This, actually, is a fucking fantastic schlock premise. In fact, this idea is the closest thing the vault has ever seen to a slam dunk. Basically, what we have here is a base, cheesy, exploitation movie. The actresses consist of ex-Playmates (Nicole Rayburn and Deanna Brookes), and the story is so intentionally stupid that every single iota of what could, maybe, pass as intelligence has been stripped out of it. If an Aubergine could pen a screenplay, then I don’t think it would be far off Candy Stripers.

There’s absolutely no point at all in me attempting to do an actual plot analysis, because there isn’t one. Seriously, this is b-movie horror reductio ab absurdio. Instead, the film can be easily encapsulated with a brief synopsis. Midtown USA (can’t be arsed to look it up) is in deep shit. Alien fuckmonsters have possessed the quite unfeasibly hot nursing staff of their local hospital, and THEY MUST BREED! In the midst of this some douchey jock has broken his leg, and his mate is feigning injury to avoid school. His mate’s sister (who may as well have SURVIVOR GIRL stamped on her head) is a diabetic and in hospital visiting her brother. Can our heroes stave off the attention of the nympho fuck beasts from outer space? Will they have the willpower to turn down these suspiciously hot medical support staff, and why is nobody in this hospital in Middle America morbidly obese? Method of death is our nurses shag the bejesus out of you, then wrap you in some goopy webbing of some description. Oh yes, and they also require a shit load of sweet things, which isn’t at all an excuse to lick lollipops suggestively. 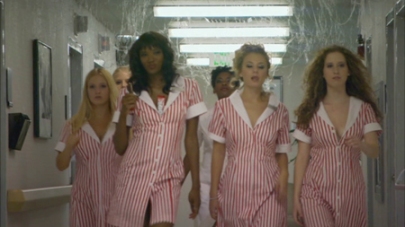 They’ll fuck you to death. It’s probably worth it.

Candy Stripers is the proverbial film of two halves. The first half setting it up is great fun. Our nurses all drop clothing at the slightest provocation, not to mention engaging in random acts of lesbianage, and basically shag anything with a pulse. The “nobody believes us” atmosphere is well established, and there’s plenty of sharp dialogue to fill the time before the next act of completely justifiable nudity. I was, actually, really enjoying myself- particularly watching the dimwitted brother Joey (William Edwards Jr) trying to convince the world that he actually was banging one of the hot nurses. Not even his best mate, Jock with a broken leg Matt (Brian Lloyd) believes him. Mind you, I witnessed it, and I didn’t fucking believe him. His interaction with his sister (Tori White) is reasonably entertaining, but the film is overcompensating for her natural attractiveness in a bid to de-sex her and make her the virginal survivor girl.

Stylistically, the first half of the film veers towards the very simple. There’s no CGI (hallelujah) and the colour palette is big, bold primary colours. It’s really very simple stuff, but looks polished and the pacing is such that it rocks along at a rare old clip without outstaying its welcome at all. I’d like to talk about the score, but I can’t remember it. Sue me. The acting isn’t really up to much (let’s face it, nobody was cast in this film for their ability to actually act), but there’s a sense of fun; everyone is having a blast and you can really tell.

He literally exploded in his pants. Understandable.

However, it all goes completely tits up (pun intended) in the second half. Once it has become apparent that our heroes are in for a messy, possibly cavity causing, time, the film goes into overdrive to try to work shit from the first half in. There’s a big deal made about Tori’s diabetes, so you’ll never guess what the alien fuckmonsternurses’ Kryptonite is. Coupled with that is the obvious nerd-girl and Jock get together that the film is striving to forcibly ram in. His girlfriend is a slutty cheerleader (no wank fodder left unreferenced here), and so it jumps through ridiculous hoops to get her out of the way.

The visual style also collapses. Gone is the clean look of the first half, instead the lighting goes all murky (oooooh scary), and everything is draped with some kind of shitty webbing stuff that the evil alien fuckmonsternurses excrete when on the job. I’m, actually, not sure what the hell the deal with the webbing is, the bloody stuff is everywhere and doesn’t seem to do an awful lot. It doesn’t slow Joey down, for example. There’s also some cobblers about Telepathy thrown in for good measure, and the last third of it is an inordinately lame chase sequence between Matt (on crutches), Cherie and Joey and the horny fetish aliens before the inevitable exploding building ending. 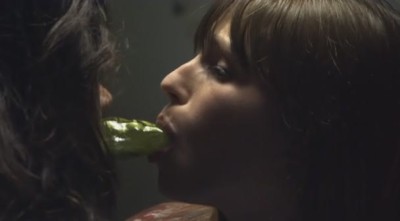 I note with some interest that the film was directed by a woman, one Kate Robbins, and unlike most schlock efforts directed by the fairer sex, she does a not too bad job. It’s apparent that there are serious problems with the second half, and as such the speed (if anything) accelerates. I’m being a touch unfair here, because the problems are all inherent in the script. For example, Kate (also on writing duty) painted herself into a corner with the insistence that Matt had a girlfriend. Having established this at the start of the film, and with her goal clearly in mind, she was, therefore, obliged to jump through insane and practically incoherent narrative hoops to achieve her ending. The film, incidentally, would have been exponentially better had the girlfriend not featured.

And this isn’t the only time this happens. The script is rammed full of examples of the pudding being over-egged, with character actions and motivations that exist solely to service the demands of the plot. It’s entirely unnecessary, for example, for Cherie to be diabetic as insulin is so explosively fatal to our nurses that the “humanity test” would have been completely effective regardless of medical status. I suspect that another few drafts on this script could have turned in a storming little low rent cheesy exploitation.

This is the downside of doing the nasty with Alien fuckmonsters cunningly disguised as nubile nursing staff.

Overall, I really want to like this, but I don’t particularly. It did its job and I did stay awake through it, but the second half is just such a confused mess that it took a lot of the shine off a little film I was going to give a glowing review to. Don’t get me wrong, there’s plenty to appreciate here, and if I ever bumble across it on TV again, then the promise of more tits than an aviary would probably get me watching again. However, I feel a bit let down, and as such, I’m going for a “Meh”, and it really is a bit of a waste.