So, for those that aren’t familiar with this, one of Jarv’s golden rules of cinema is that if there’s a large gap between a sequel and it’s predecessor then 99 times out of 100 it will be awful. Examples range across the different genres, including The Godfather Part 3, Indiana Jones and the Crystal Skull, Texas Chainsaw Massacre 2 and so forth. The reason being is that if someone chooses to exhume a long-buried franchise, then chances are it’s motivated entirely by money and a hope to cash in on some hazy name recognition. There are films that break this rule, notably Rise of the Planet of the Apes, but that’s countered by Burton’s stinking remake, and who can ever forget the Star Wars Prequel atrocities? Return of the Living Dead 4: Necropolis (they dropped the 4 for release) has further handicaps to overcome, not least of which is that it’s a Sci-Fi Channel film, and was shot back-to-back with its vastly superior sequel in Eastern Europe. It’s no surprise for me to tell you up front that this one ain’t a winner.

The Sci-Fi Channel films are invariably awful. They’re always cheap and cheerful little B-Movies, yet have an almost total absence of nudity and the gore factor isn’t up to scratch. Considering two of the signature features of Return of the Living Dead is that it has more guts than a Turkish butcher’s window, and enough tits for an entire convention of ornithologists to stare at, this, frankly does not bode well. The other signature features are the excellent practical effects and well designed intelligent zombies. Note, I said “intelligent zombies”, not “indestructible human”, they’re still undead. This will be important for later in the review.

The film opens in probably the most unpromising fashion imaginable- with a Robocop-style fake newscast. Basically, to bring us up to speed, it’s been years since the last Zombie outbreak and an evil company called Hybra Tech are responsible for a whole plethora of products including, inevitably, clean up of toxic waste and bio weaponry. Anyhoo, cleverly acknowledging that it was shot in Eastern Europe, we’re introduced to Charles (Peter Coyote) who is on a mission to buy up the last 6 remaining Trioxin barrels. Presumably they’re the only ones that survived from the events at the army facility in Return of the Living Dead 3. There’s a minor zombie outbreak, but Chuckie boy cleverly puts them down and legs it with the toxic waste.

Looking at his face, you would think he’s actually being fisted here. Possibly by King Kong. He’s not, that’s his natural expression.

Back in the good old USA (and not really Bulgaria or wherever in the slightest) and we’re introduced to Julian (John Keefe) and his brother Jake/ Pyro (Alexandru Geoana), Charlie’s nephews and in mourning for the loss of their parents in a mysterious Hybra Tech related accident. He hooks up at school with his douchebag friends Zeke (Elvin Dandel), Cody (Cory Hardrict ), Becky (Aimee Lynn Chadwick), Carlos (Toma Danila), gymnast Mimi (Diana Munteanu) and girlfriend Katie (Jana Kramer). So far so so-so. Although having said that it is already apparent that Julian is a colossal twat of the moping variety.

Anyhoo, one deeply annoying, horribly badly staged dirt bike accident and our heroes have discovered that Zeke (presumed dead) has been taken to Hybra Tech’s shadowy lab for experimentation. Displaying more improvisational skills than Macgyver on his best day, our motley crew manage to assemble everything they need to bust into Hybra Tech and rescue Zeke. 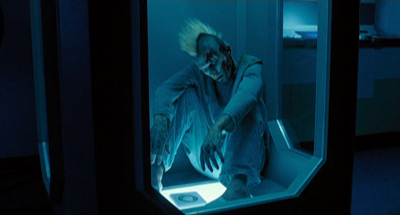 A punk zombie. One of the better nods to the original in the film.

Once inside, having used the power of slutty gymnast to distract the guard, our heroes blunder into Uncle Charlie. He takes them on a tour of Hybra Tech’s top secret Necropolis and they rescue Zeke. Next thing you know, he’s showing them the zombie baby room (ripped straight out of Alien Resurrection) and admitted that Julian and Pyro’s parents are being held in the Northwest tower. Due to a spectacular act of fuckuppery, Katie manages to unlock all the doors in the necropolis and thereby unleash the zombie horde on the lab. Julian, Cody and the increasingly unhinged Carlos make it to the Northwest Tower, before fist fighting with three zombies (thankfully this is the end of Carlos), and are introduced to 2 rejects from Resident Evil who are apparently Julian’s parents.

In the meantime, Zeke, Becky and Pyro are escaping in a Range Rover. Zeke begins to transform and in the single funniest moment of the film, Becky tasers the fat kid to make a zombie let go of him. She then fucks up and totals the car, fatty dies and Zeke runs away from a flamethrower. Charles pops up on the 12th floor to open the door and unleash the super-zombie parents, Julian has a fist fight with Zombie Zeke (this is astronomically lame), and the SWAT team pitch up to exterminate all the zombies, but not before Zombie-Cyborg-Parental-Units can cap Katie. Last shot of the film is sleazy uncle escaping with three barrels of Trioxin. 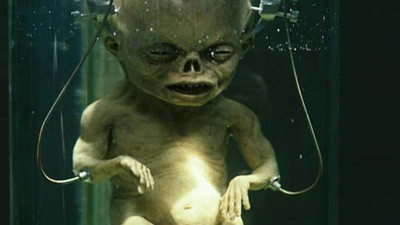 Zombie babies are insta-fail. Every time.

This film honks. It honks like a three day old corpse. For a start, it can’t make up its mind how you kill the zombie horde. The film makes it very clear early on that it’s a traditional bullet in the head type of film, yet countless undead are taken down with gunshots to the chest. Why is it so hard to stick to the rules they established? and anyway it’s flaming stupid to kill zombies with gunshots to the chest.

Secondly, the film is almost on kleptomaniac levels with references and outright thefts from other films. Aside from the cloning room, blatantly from Alien Resurrection, there’s a “send more guards” scene pillaged straight from the first film, and the bike crash comes from ROTLD 3. Furthermore, the outright plagiarism from Resident Evil, of all fucking things, really, really pissed me off. Seriously, Hybra Tech may as well be called Umbrella Corporation. The parents are clearly meant to be the film’s “cool” card, and play them it does- except they do fuck all of use, being laughably blown up and then run over, or stabbing an electricity cable. Fuck knows why they’re even in the bloody film, as they certainly are not cool in any way, shape or form. 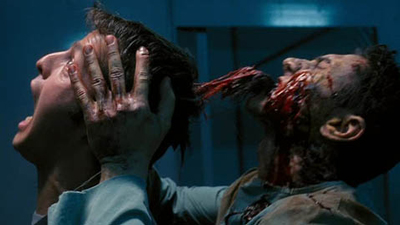 Not enough in there to smear on a Ritz cracker, mate.

Thirdly, it’s horribly lame. While the gore effects are semi-decent (notably the brain eating and gunshots to the head), there is absolutely nothing in the way of nudity. Nothing. Zip, nada, zilch. This is unforgivable for an ROTLD film, which is traditionally one of the most exuberant and gleeful little zombie franchises out there. As if that wasn’t enough, the fist fight between Zombie Zeke and Julian had me shedding tears of frustration that I was enduring this astronomical level of lame nonsense, and had I not been in sight of the end, then I’d have switched it off.

The writing and acting are shite, with Coyote not trying and Keefe actively stinking the screen up. The problem for him is that the character is such an utter cunt, and such a whining little bitch that I struggle to want anything for him other than becoming an appetiser for the zombie horde. Furthermore, Dandel, for some reason, doesn’t play re-animated Zeke differently from human Zeke. It’s exactly the same intonation, performance and mannerisms. This is terrible, as there’s honestly nothing, aside from some slightly dodgy makeup to distinguish his living and dead state, and I also nearly turned the film off when he said “I want to eat your fucking brains” to Becky. 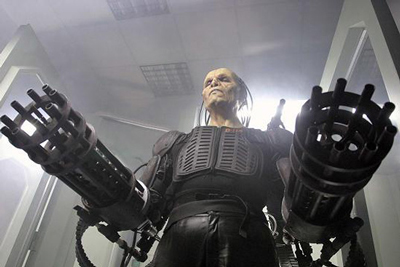 On a script level, this is an amazingly lazy film- Carlos becoming more and more gun happy wasn’t a surprise, but the intrepid rescue party stopping to have a 20 minute conversation with Charlie in the middle of the lab during the rescue mission sucked badly, not to mention Katie unleashing the zombies was an atrocious piece of shoddy scripting, and not the only hugely convenient deus ex mahcina. Basically, she’s trying to turn the alarm off to prevent the police from catching them breaking in to the lab, but given they’ve broken in to rescue their kidnapped friend, would it be such a bad thing if Officer Dibble turned up? No, it wouldn’t. Furthermore, by having her excitingly type away before looking confused and then typing some more is just a terrible way of executing the scene.

Overall, Return of the Living Dead Necropolis is a terrible film. It should, in almost any other instance, be worth an Orangutan of Doom, but I think it just manages to duck it. There are two moments that made me laugh out loud and as such I can’t go as low as the sad ape. The first is when Becky tasers the fat kid to knock the zombie off, which is hilarious, but the other is Mimi’s line after she’s caught with the security guard “I’ve told him everything and he just doesn’t care”. Aside from that, though, this is an awful film, and I’m starting to develop a theory about Return of the Living Dead films, which I’ll go in to in more detail after the 5th. Needless to say, I don’t recommend it, and it is, in fact, shite. 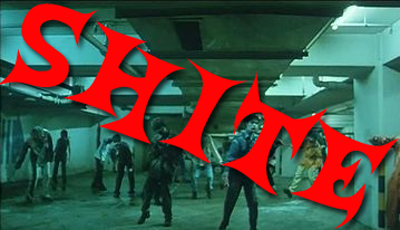 Next up is the final part, the vastly superior Rave to the Grave and I find it surprising that they made them back to back given the quality differential involved.

5 responses to “BRAAAAAAIIIIIINNNNNSSSS!!! Return of the Living Dead: Necropolis”