Maybe my brain is a bit fried from the heat. Or maybe I’ve managed to overdose on bland, 16 year old Goth sentiments. Nevertheless, and this defies any attempt at rational explanation, I found myself quite enjoying Underworld: Awakening. Seriously, particularly given that it was Underworld: Awakening 3D™, I can’t believe I didn’t hate it. I’m even not going to use the standard 3D disclaimer about it being completely useless and even seeing the words 3D makes my expectations deflate faster than Adele’s space hopper. So, this is going to be a lukewarm-ly positive review of an Underworld film, now who would ever have thought that was likely?

May contain super-werewolves and spoilers below

Selene began to suspect her tour rep had lied about the “90 degree” heat, and that she would probably need pyjamas to sleep in.

By the same score, in no stretch of the imagination could this actually be called a good film. It isn’t, it’s still plagued by blue filtered nonsense, but there’s absolutely no sign of human plank Speedman after the opening (huzzah), and therefore we are spared his steroid driven super smurf. Hallelujah. It does find a way to keep the hybrid claptrap going, and possibly the dumbest way it could have, but it is, amazingly, entertaining. As is to be expected, Beckinsale looks great in leather, the Werewolf design is fairly good, there’s a load of completely lost high-end British thesps,  and so forth, but it appears that they’ve paid attention and finally got rid of all the really sucky (no pun intended) features of the Vampire v Lycan saga.

“Who do I have to blow to get out of this series?”

It’s moved ahead to the near future. Mankind has discovered the existence of vampires and werewolves and has been working hard to steadily exterminate them. The vampire clans are fractured and living in smaller and more mobile covens and the werewolves have been driven below the streets where they’ve reverted to basically being feral animals. Selene (Beckinsale) and Michael have been captured, and she’s in cryogenic sleep while the evil corporation headed by Dr. Jacob Lane (Stephen Rea) experiments away on them. One night she awakens and busts out after messily slaughtering the human guards. Except something’s wrong- she’s  plagued by a telepathic (and shoddily shot) link with another hybrid. Who can it be…

Eve was very upset that they’d taken her teddy bear off her. So she held her breath until she, literally, turned blue. And grew fangs.

Hilariously, it’s her daughter “Eve”, (India Eisley) who may be the most powerful hybrid of them all. I’m not kidding actually, Beckinsale even says this at one point so were in no doubt about how important she is. Anyhow, she meets up with vampire David (Theo James- trying his best to fill the plank void left by Speedman) and he takes her to his coven led by Thomas (Charles Dance). Lycans (now super powered) bust in, Eve morphs into Smurfette with fangs and carnage and shenanigans ensue. Eve is kidnapped for further experimentation and Selene, with a bit of help from Detective Sebastian (Michael Ealey) breaks into the research lab to rescue her, will she be in time? 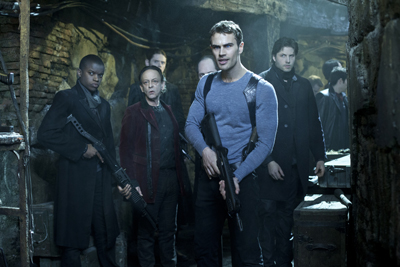 The lads were all prepared for their night out in Croydon.

Let’s start with the acting. It’s terrible. Eisley is a child with a thankless task, Rea seems a bit sleepy, and James is a plank. Dance is overacting horribly, but Beckinsale, in a moment of genius, is trying her hand at a bit of Chris Klein style anti-acting. She’s so bad, and so stupid, that it almost transcends the film- the exchange where she’s trying to explain to India how she only ever loved one man is delivered in the most hilarious “couldn’t give a fuck” tone of voice- she literally tosses off what’s meant to be the big emotional reveal of the film. I nearly cried with laughter, but not as much as I did during the interrogation scene where she’s beating the shit out of some poor human and has him held by his neck out of the window. Not to mention that her arse puts in its usual sterling effort in the catsuit.

Selene was chuffed to bits that she still had her magic guns that never need reloading. She still couldn’t hit water if she fell out of a boat, but at least she can have lots of shots.

Christ, she’s a terrible actress, she really is. The thing is, though, that I’m not sure how much of this is her fault. I suspect, actually, that she elevates the material, because Selene is reduced to practically no emotion at all (maybe the ice from the cryo chamber got in her veins) and she’s lumbered with some of the most ridiculous dialogue that I’ve ever heard. A great case in point is the emotional mother-daughter bonding session which culminates with Beckinsale trying to keep a straight face while saying “My heart is not cold; it is broken.” That’s truly dire. Nevertheless, this really isn’t about the character and dialogue here, it’s about the dumbhouse, which the film delivers on in spades.

Selene’s pet dog was upset with her for teasing him with the Hoover.

From the first escape with the corridor slide to the jump through the window, we know almost instantly that this is going to be a phenomenally stupid movie. Selene has always been a stab first think later kind of girl, but here the film almost seems to be waiting for the next overblown action encounter. Luckily, there are loads of them, including the attack on the Coven with the vampires using very silly weaponry which the superwolves seem to be impervious to. Interestingly, though, the super wolves aren’t impervious to Eve transforming into Smurfette and jumping on their backs. Honestly, it is so incredibly, and hilariously, stupid watching a 12 year old painted blue attacking fully grown werewolves. Who thought this was a good idea?

The final assault on the lab, is also far more entertaining than it has any right being. Yes, it basically robs wholesale from The Matrix, but throwing in Werewolves and Vampires to this can’t be a bad thing, surely. When the eventual confrontation between Selene and Superwolf takes place in the garage and he’s tossing vans aside to get to her, it’s astonishingly dumb, and genuinely hilarious. As, equally, is Eve dealing with the evil doctor.

Terribly screen shot this, but it’s the only one I could find with the series’ main selling point prominently featured.

Overall, this is an astonishingly stupid movie. Stunningly stupid. However, credit where it is due and they’ve finally realised that Speedman sucks and his bloody Navi alter-ego is a dead weight. Instead, we’ve got Beckinsale as the hybrid, but she never transforms, and they throw the sheer stupidity of a child into the mix. Despite, in theory, humans being the main antagonists, the film manages to focus on the war between the vampires and the Lycans and doesn’t try to burden  itself with twist upon twist. Furthermore, it clearly knows who the villains of the piece are, and has great fun in staging the fights. I’m giving this a very, very narrow (width of a cigarette paper) recommendation, with the usual disclaimer about watching it with beer, because despite myself, I did enjoy an Underworld film.

And that is the first genuine surprise of the series.