It’s round two of Underworld. Kate’s back in the jumpsuit and raring to put a cap in some undead bad guys.

Apparently this film bombed in Middle America. Allegedly, someone in the Marketing Department (let’s call him Philibrick) at the studio realised in a stroke of genius what was wrong, and we’re lucky enough to have received the transcript of his conversation with his boss taken from the security footage:

Contains very broad brush and crude satire (with a sprinkling of bad taste) of Hollywood marketing idiocy and spoilers below.

Someone’s just asked him for his 2 times table.

*Sound of knock on door*

Marketing Chief: What the fuck do you want?

Philibrick: Sir, it’s me, it’s about Underworld Evolution. It’s tanking in Kansas, and that looks like it’s going to be the same across all of the flyover states.

MC: What? Bitches, leave. Not you, you can stay, but remember don’t talk with your mouth full. (Louder) You, dipshit, Come on in.

*Sound of door opening, punctuated with high heels quickly retreating down the corridor*

MC: Fuck’s sake, this is going to be a three line meeting. Get my blow from my jacket, I’m not getting up from behind this desk to get it.

*sounds of chopping followed by a long sniff*

Philibrick: It’s tracking really badly sir, Kansas, Iowa, Ohio, West Virginia, they just want nothing to do with it!

MC: You’ve told me that, cunt. Any idea why?

Philibrick: I think it’s the name sir, Evolution doesn’t go down too well there.

MC: Good fucking idea, in that case, rename it…

*Sound of quiet sobbing, before door opens and shuts*

Right, where were we. Yeah, just call the cunt Underworld Intelligent Design. Fucker will shift like hot cakes then. If not, then people are probably bored of fucking vampires and shit, so we’ll come up with some shit with some anemic limey looking cunt moping over some Mormon. We’ll make him sparkly and shit, he’ll watch her while she sleeps. No, wait, I’ve got it! the cunt can play baseball. Middle America loves baseball. They’ll dig that and we’ll be golden. But I’m telling you, you won’t be here to see it, because if this doesn’t work, then you’ll never buy blow in this town again.

Philibrick: I’ll get the posters drawn up immediately, sir.

Obviously, this is a joke, although I wouldn’t be surprised to discover a grain of truth to this being actually how this film did end up coming to life. Nevertheless, this loaf did make a bucket load of cash everywhere. Still, nothing like a bit of bad taste in the morning.

Carrying on straight from where the original left off, the Vampire Hierarchy is in a right old state. Two of the Elders are dead, the Lycan top rank has been wiped out, and only the third Elder, Marcus (Tony Curran), is around. Except he’s suffering from a severe dose of PMS and is totally off the leash and on a one vampire mission to hurt almost everything around him. In the meantime Selene and Michael (Kate Beckinsale and Scott Speedman) are on the run, as they rightly realise that they’ll be in a bit of trouble if they’re caught by the vampires.

Cracking piece of design, this. Completely fucking wasted, but you can’t have everything.

Helpfully filling in a lot of the mythology, Evolution seems to be obsessed with the back story to the Lycan- Vampire war. Originally there were two sons of Corvinus, William (bitten by a wolf) and Marcus (bitten by a bat) and they were the original Lycan and Vampire respectively. Marcus went to Viktor (still Bill Nighy) to help him imprison William forever, and he commissioned Selene’s family to build the prison. In return, he was made immortal, and butchered Selene’s kin, before turning Selene as she resembles his dead daughter Sonja. This was information helpfully supplied by the first film for the most part.

Anyhow, Selene expresses her deep love for her fellow travelling pine tree and shags him, before they end up in a few gunfights. She discovers that Corvinus (Derek Jacobi, blatantly paying the mortgage) is still alive and he blesses her with some of his blood, thereby allowing her to become a hybrid too and take down Marcus and William. As before, the film builds to a big showdown, but this time it’s in the sewers, so we can see Kate get all wet. Not that it matters, considering she’s practically stitched into the catsuit this time.

Marcus glares at the camera. I would imagine he’s not too happy about something.

This film honks. The first film was bad enough, but this one is every bit as bloody awful as could be. The plot is practically nonsensical, the character motivations incoherent, the over-stylised blue lighting is back in abundance, and it’s fecking boring for most of the run time. The actors, particularly Jacobi, are even more on autopilot than they were, which is a pity, and there’s more of Speedman, which is even more of a pity. Kate, to be fair, is marginally better in this film than the first one, and she’s clearly more at ease playing the Death Dealer this time round. Really, though, there’s nobody there chewing scenery as hard as Bill Nighy was (or does in the Flashbacks) and I found myself actually wishing there was more of him. 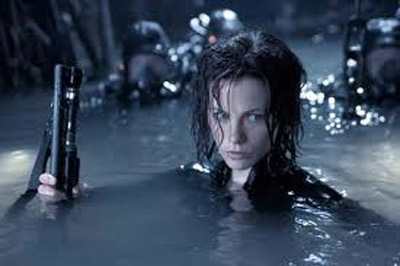 This is why people watch the Underworld films

Basically, what this feels like this time is that Wiseman has absolutely no idea what made the first film a success. He strips out almost all of the fun stuff in it, and keeps all the things that didn’t work. For example, if there’s one thing that needed to be excised from the series, that’s Speedman and his annoying Avatar reject of a monster alter-ego. He’s, actually, placed front and bloody centre of the film, and the characters that suffer are Selene and the other Vampires who are practically defanged. Which is a crying bloody shame. I’ll give you a clue, Len, people like me saw the first one because it was a war between Vampires and Werewolves while humanity was oblivious. This is cool. Watching a smurf on steroids hop around like Yoda on crack is not. 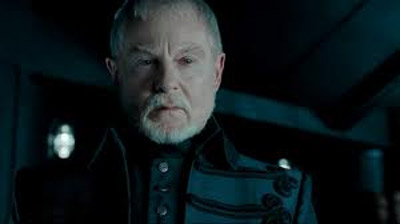 Hey! I know you! Didn’t you used to be Derek Jacobi?

This is also, unbelievably, an inordinately bland film. It honestly doesn’t feel like anything is happening, the stakes feel smaller. All in all it’s really bloody dull. I can’t understand for the life of me why you would shift the action out of the city with its Gothic architecture in favour of a nondescript forest that looks like it was shot somewhere in the Czech Republic, but that’s what he’s done. It feels cheap, actually, yet the budget was a lot higher than in the first film.

Nevertheless, it isn’t a dead loss. Beckinsale’s arse again puts in a splendid effort, but it also has by far the best scene in either of the first two films: the opening flashback to the village raid. More of this, and less of the bollocks with Bluey Mcboredom post jumping bean casserole and it may have been worthwhile. Basically, after this one, the message should clearly have been: More war between Lycans and Vampires, less dopey love story and crap smurf antics.

Overall, this is another one I don’t recommend. It’s toss, actually, and only the flashback the film opens with saves it from an Orangutan of Doom. Really, these films are such an epic failure that it’s incredibly annoying. Beckinsale improves, Speedman still sucks, blue monster is still awful, and I’m not convinced by Man-Bat as the big bad villain of the piece (although William the angry werewolf is a spectacular piece of design). Nah, Underworld, you haven’t evolved in the slightest, and you are, in fact, still shite. Actually, for mystifyingly being worse than the first one, you can after all have an Orangutan of Doom.

Still, someone (possibly Philibrick) ran a focus group, so we’re getting a prequel for part three. No hybrids whatsoever, so that should be all about the war between Vampires and Lycans. That’s bound to be a winner…