Stalker is another film that our very own Col. Tigh Fighter found the location for, so as such I almost feel duty bound to review it, especially when I also interviewed producer Jonathan Sothcott for Pop Culture Ninja on White Collar Hooligan. So, here we go, another of the seemingly endless chain of UK Horror movies that have sprung up like toadstools after rain since 2010. This time around, the pedigree isn’t too bad with former Spandau Ballet and Eastenders escapee Martin Kemp helming, Sothcott producing and Jane March, Billy Murray and Colin Salmon in prominent parts. It’s also “inspired by” the only British film to ever make the video nasty list, the repugnant (or so I am informed, I haven’t seen it) Exposé, also known as The House on Straw Hill.

Contains a very strange floater and spoilers below 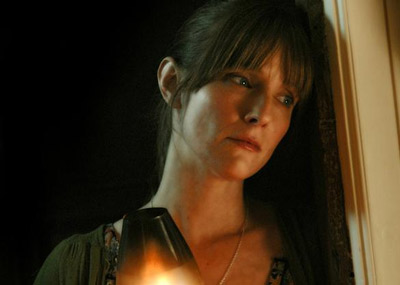 Paula (Anna Brecon)  is a successful novelist suffering from a nervous breakdown. On the advice of her agent, Sara (Jennifer Phillips), she returns to her childhood summer home to get away from it all and get her writing back on track. However, she’s totally isolated, and cared for by a maid (Linda Hayden- in a nice nod to the original) and a gardener and the writing doesn’t go anywhere. Enter helpful PA Linda (Jane March), who jumps to Paula’s aid and the writing seemingly begins to flow again. Except she’s nuttier than a fruitcake, and has serious psychopathic tendencies manifested, hilariously, by flushing a cat down the toilet. I’m not joking, Jane March, the little girl from Color of Night flushes a cat down the crapper. I was howling with laughter, particularly when she starts trying to stamp on it to push it past the u-bend.

In the meantime, sleazy journalist Robert (Billy Murray) is trying to get some dirt on Paula, and interviews her old shrink Leo (Colin Salmon). It all comes to a messy head, people are stabbed, garroted and amusingly clobbered with an I-mac, and laughs are had by all. There is a twist, that the film works very hard to keep hidden before the final sequence, so as I’m not enough of a bastard to intentionally reveal it, and the movie does try so hard to hold it under wraps, but really you can see it coming from quite early in the film. 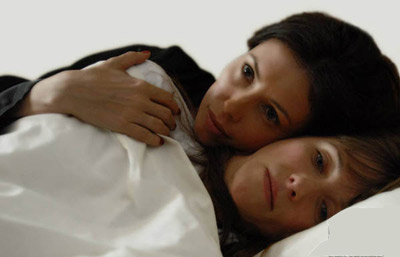 This isn’t a bad film. In fact, for a first time effort, it’s really quite good. Kemp apparently loves the genre, and you can see this running through every frame of the movie. While, yes, it may be a touch predictable on occasion, and it really isn’t anything you haven’t seen before, Stalker does whip by in a reasonably enjoyable way and almost luxuriates in its own absurdities.

The casting is a touch strange. I’ve never seen Brecon before, or at least I don’t recall ever seeing her, but she’s trying hard here. She doesn’t, I’m sorry to say, have the chops to pull off the slow mental breakdown that the character needs, but she does try extremely hard, and almost manages to redeem herself in the finale. March, on the other hand, has never been called a good actress (because she isn’t), but I don’t think I’ve ever seen her be more entertaining than she is here. Admittedly, she gets all the fun lunatic dialogue, with the “whore” rant in particular being downright hilarious. She’s trying to portray insanity, and so as such breaks out a full range of strange stiff body language and odd expressions at her disposal. Nevertheless, she’s hugely entertaining, and seems to be having a blast. Murray is Murray- a solid pro, who puts in a solid effort here, and Salmon seems to be a touch bemused that his character is even in the film.

Jane “axed” her a question. She didn’t know the answer

There are some notable strengths to this film. The first is the location, a sprawling estate in the arse end of nowhere that could have come straight from a Hammer movie. It looks great, actually, and I was cursing that the film doesn’t make the most of it. Honestly, much of the movie seems to take place in a handful of rooms, whereas this could, and should have been, far more gothic. I’m sure Kemp knows this actually, and I suspect that were he to make Stalker again, then he’d make far more of the house itself.

Secondly, as noted above, I suspect that he does understand the genre. So he’s not shy of gratuitous nudity (surprisingly not March, who’d have seen that coming?) in the bathtub, or when a murder comes it’s well staged and messily graphic. Murray’s check out in particular with March garotting him with cheese wire is absolutely repugnant as the blood bubbles out and she cuts all the way back through his neck. Brilliantly, it doesn’t go for decapitation, and furthermore it looks like March is really struggling to cut through which is a nice and unexpected touch of realism.

Jane’s PMS had really got out of hand

There are other strange touches here, that I’m not sure particularly work. The soft-focus sex scene that plays through the credits turns out to have a repugnant connotation, and the reveal made me feel very icky indeed. I think, actually, that this was a massive mistake, and I’ll bet that the original inspiration is rammed full of half-baked ideas such as this. Furthermore, Salmon’s character is another Dr. Exposition, and his explaining the whole bloody twist in the car with Sara at the end was intensely irritating. There needed to be another way for Sara to discover the truth than have him boringly (and he does look bored) explaining it to the audience.

The overwhelming problem, though, is that Stalker is both hackneyed and predictable. You’ve seen this kind of thing done thousands of times before, and March is obviously bugnuts from first appearance. The Hand that Rocks the Cradle, for example, is infinitely superior to Stalker, and is a very very similar premise. Secondly, even the dialogue, particularly March’s, is completely clichéd, being full of stock rage that we’ve all seen done in other movies. Although, admittedly, there is something alluring about the incredibly posh March yelling dialogue including the phrase “fucking whore”.

This was a very strong negotiating position for Jane.

Overall, this is an OK film. However, it has far too many problems for me to wholeheartedly recommend. It’s another one that if you blunder across on TV it won’t be boring, but there’s no reason on earth to seek it out. However, it was nice seeing March in a decent role again, and there’s enough here to suggest that Kemp’s next trip out of the blocks will be far more successful than this one. As such, I give it another “meh” for a British Horror Movie, so I do suppose we are at least consistent.

Congratulations to the Col, by the way.