Made In Britain: Paperhouse 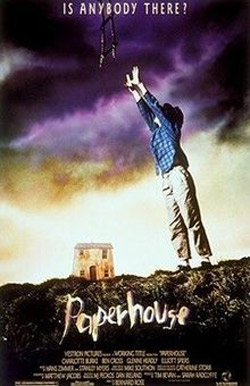 I struggled with how to categorise Paperhouse. Initially, I considered writing this review as an Underrated, because Paperhouse is a hideously underexposed little film, however on reflection, I think this is the natural home for it. Yes, it is obviously underrated, but I try to save those reviews for films that I’d consider giving a maximum to, yet for some reason have dropped off the radar. Paperhouse was music director Bernard Rose’s début feature (he was previously responsible for the Relax video that got banned), and was completely missold as the UK’s answer to Nightmare on Elm Street. It’s nothing of the sort, instead, Paperhouse is an almost-outstanding slice of dark children’s fantasy, a creepy film full of strong images, and with enough chills to traumatise most kids for a long time.

May be a fever dream but has spoilers below

Based on the novel Marianne Dreams by Catherine Storr, Paperhouse is a complex multi-layered film. If you take the plot literally, it’s about the fever dream of a very sick child, Anna, delightfully played by Charlotte Burke. However, that simplistic interpretation doesn’t explain the supernatural shenanigans that form the majority of the plot. I’ve got an interpretation of it, that I’ll come to in a moment, but before that this is the plot: 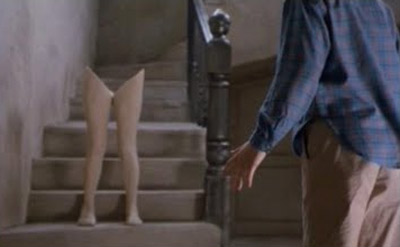 Anna has undiagnosed glandular fever. After she collapses in an abandoned tunnel, and prompts a police search, she’s consigned to bed. While she’s unconscious, however, Anna journeys into a world that she’s drawn. Inside the drawing she meets a disabled boy called Marc (the tragically dead Elliot Spears) and starts including more and more elaborate items in the interior of the house. Eventually, she decides to include her father, but has accidentally drawn him looking “like a psycho”. This is where the horror starts- as on her next visit into the world her father is manifested as a murderous, eyeless, ogre intending to cave her and Marc’s head in with a hammer.

Candles were considered to be a banned substance in Paperhouse world.

In the real world, however, Anna is very sick. Her fever has spiked and she’s slumped into unconsciousness, as her father brutally beats her chest (horrendous scene), it’s clear that Anna is dying. Eventually Marc rescues her, and the two children go to the lighthouse she drew as a refuge. However, Marc is a disabled patient of her doctor, that she’s formed a telepathic link with through her drawings, and in the real world the escape to the lighthouse is the child actually dying. Once Anna wakes up and learns this, she goes on holiday to Devon with her family, and the film ends with her pulled back from the cliff edge as she reaches for the bottom rung of a rope ladder suspended below a helicopter.

This scene is genuinely creepy.

Complicated, eh? Well, it doesn’t play like that. There’s a strong sense of internal logic to the film, and the Supernatural shenanigans make total sense when in context. My interpretation of it is that, yes, it’s a fever dream, but a bit stronger than that- this is the final internal death vision of the young girl. I know that ‘s a bit nihilistic, but that’s my best guess to explain the last act.

This is a really, really good film. The acting from the young leads is first rate, even if Anna is a bit annoying. The imagery here is absolutely stunning, with the misshapen house in particular standing out from the heath like a broken tooth. The inside of the house is brilliantly realised, with Anna’s childlike drawings perfectly bought to life on the screen. The storyline is involving, the score is flat-out brilliant (top drawer work from Hans Zimmer), and all in all there’s a lot to recommend here. 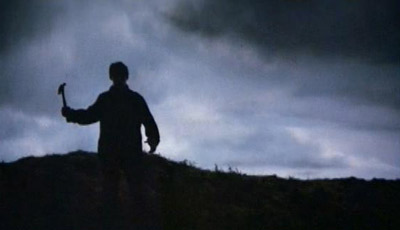 The supernatural touches to the film are brilliantly done, with Anna unable to erase her picture, or the jump scene with her father in the photograph working supremely well in the context of the film. The changes to the Paperhouse are genuinely creepy, with her attempt at scrubbing the window out resulting in ugly black slashes across the front of the house completely changing the lighting and atmosphere of the film. The disfigurement of her father’s face is a great touch, and the makeup used to realise it is creepy and convincing. 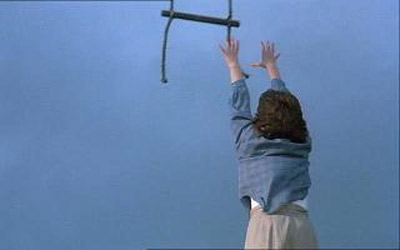 Subtlety is not this film’s strong point. Frankly.

I hate to do this, but there’s a huge amount of subtext in the film. Anna is 11, so on the verge of puberty, as such a vast amount of the movies context makes sense with this kind of analysis. When Anna plays truant with her friend, the first thing  she does is age herself with vast amounts of makeup, before entering a big dark tunnel. Her family unit has collapsed, and her father is presented as the threat of the film- a lumbering monster intent on destroying Anna’s happiness with a hammer (He does literally smash her bike into pieces). While Anna doesn’t get on with her mother, it’s notable that she never appears in the paperhouse, so can clearly be disregarded. The lighthouse is an obvious visual metaphor, as is the grasping for the rope ladder and so on and so forth. All of this is obviously bollocks of the rankest sort, but the film jams so much of this kind of imagery in that I can’t help but think it was intentional.

Does that represent a phallus? Well, Dr. Freud, it ain’t a cigar.

Unfortunately, and this is why I’m not putting it as an Underrated, the film carries on a long time after the natural end. The final scene should be the intensely touching reunion between Marc and Anna after she survives her final fit. However, the film carries on with the super-idealised vision of her family pulled back together and on holiday in Devon. Further complicating matters is that the exact cliff-face and lighthouse from Anna’s drawing appears in the holiday. This leads me to believe that she croaked, and didn’t make it. Nevertheless, the problem is that after the climactic battle in the Paperhouse,  the film comes to a bit of a halt, all this “heaven” sequence is frankly extraneous to the plot, and because of this  a little bit boring.

Hence why candles are banned in Paperhouse world.

Overall, what we have here is two thirds of a nailed on classic. It’s sumptuous, gorgeous, and simply stunning to look at, the acting is brilliant, the music is outstanding and it’s touching, legitimately gripping and genuinely frightening on occasion. Unfortunately, the last third tries it’s utmost to negate what we’ve just seen. This is a genuine shame.

I rate this film, and recommend it highly. However, it is problematic, and I truly mourn the idiots that tried to sell it as a Nightmare clone. What Paperhouse actually is is a beautiful, deep and terribly tragic film that really does deserve rehabilitating and misses out on being a lost classic by the tiniest of margins. Paperhouse is widely available through legitimate sources and otherwise, and I honestly believe you could do far worse than dig it out.

So, so close to being perfection, this is indeed a very good little film.

18 responses to “Made In Britain: Paperhouse”