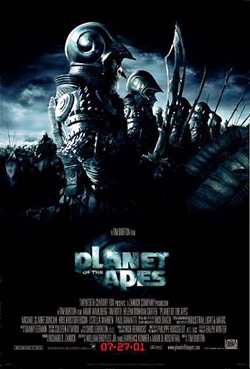 Bah, I hate this film. I’m a long time fan of the Apes films, and even the rotten TV series to some extent, and was massively excited to see Tim  Burton was directing a remake of it. Tim Burton visuals and sensibilities on Planet of the Apes? This had to be mint. Unfortunately, it wasn’t. Burton didn’t want to do the film, and was effectively a hired gun director, and as a direct result, the Planet of the Apes remake was an unmitigated fiasco from start to finish. Although it did make a whole bucket of cash, it was so reviled that Fox dropped the axe on the proposed sequel. Burton’s remake, in all fairness, isn’t as truly abysmal as its reputation, but it is easily the worst Apes film, and it is, in every sense of the word, a franchise killer.

Contains insults to the intelligence and Spoilers below.

This film is such shit, and it’s incredibly annoying as in many ways this is an almost textbook example of how to take a remake on. There were lots of immensely dreadful ideas kicking around Fox at the time (Ape Baseball? Fuck off with that), before they eventually settled on a script by William Boyles Jr, which would be closer to the original source material and set on the planet Aschlar. Tim Burton was roped in to direct, although he wasn’t happy with it, and a stupendous cast of Helena Bonham Carter, Kris Kristofferson, Tim Roth, Michael Clarke Duncan, Mark Wahlberg, Paul Giamatti and Estella Warren were signed on to play the major human and ape roles. Finally Elfman was on Music and Burton hired Rick Baker to do the makeup.

Originally set with a budget of $200m (far too much now, never mind over a decade ago), Fox made the not unreasonable call to limit the cash to $100m, which instantly doomed the film, as it then required rewrites that went on while it was being shot. However, once you sit down to watch Planet of the Apes, you can almost feel the dispiriting sensation of the wheels coming off in the first five minutes as the awful, awful vortex of suck begins to gather all around it in.

The year is 2029, Marky mark is head pilot of the funky bunch on the spaceship Oberon. He’s upset that his ape, Pericles, is about to be fired into some kind of swirly vortex thingummy, as he thinks it’s a job for humans (“never send an ape to do a man’s job”). So, when things go on, he hops in the shuttle, takes off and flies into the space anomaly to rescue his chimp. Crash landing on the planet Aschlar in the year 5021, he discovers a world ruled by the Apes, who trade humans as slaves etc. Taken captive by Giamatti’s trader Limbo, he’s caged with Daena and Karubi (Warren and Kristofferson) before being bought by Ari (Bonham Carter). He leads them all to escape, with Thade (Tim Roth) and Attar (Michael Clarke Duncan)in hot pursuit. Cue shenanigans, battle and one of the most universally despised endings in the history of cinema. Which I’m about to spoil, so hold on tight.

Eventually, Marky Mark uses his “science” to win the battle. Imprisoning Thade in the remains of his shuttle, he leads his chimp Pericles to the surface and it appears that with Attar now in charge humanity and apemanity will now live in peace. He entrusts Pericles to Ari and then climbs into his ship to scoot back to his time to try to prevent the Oberon crashing. Unfortunately, his compass is off and he crash lands on the planet again, because he’s a big fumbletrumpet, at the feet of the Lincoln memorial which is now dedicated to Thade with the inscription that “he saved our way of life”.

As mentioned above, this is almost a textbook example of how to take a remake on. The best remakes work when they take the original idea, and add a fresh spin to it. Where a remake goes wrong is when one of two things happens: it’s either a slavish Ape-ing (sorry) of the original (Psycho) or so different as to make you wonder what the fuck it actually has to do with the original other than the title (too many to go into). To take the source material for Planet of the Apes and apply this spin was actually a good idea- take the bits people liked: Crazy mixed up world where we no longer spank the monkey but the monkey spanks us, the first-rate makeup, a thick dose of social commentary and a bleak apocalyptic ending; and throw out the bits that nobody liked: crap comedy, dismal acting and so forth. And yet, it all went so horribly wrong.

For a start, we don’t care about Leo. Wahlberg can act, given the right motivation, but this is an atrocious character. He’s basically an arrogant dick for the first 10 minutes of the film, isn’t in any danger, then spends the rest of it running away. He’s further hampered by having to make doe-eyes at a chimp (Bonham Carter) or a plank of wood (Warren). Warren, actually, is so bad that her very presence on screen sucks anything worthwhile out of the film, and when an actress is being outshone by Harrison’s Nova in a series then you’ve got serious problems. Bonham Carter, as with Roth, is actually really good as Ari, but the stuff with her and Wahlberg is flat out weird.

Secondly, the humans can talk. This should not happen, and the reason being is that it feels totally wrong in technologically backward world Burton has built. However, if they do talk in Modern Yank vernacular, then for the love of god give them some decent dialogue. I nearly turned it off at the end with this exchange between Leo and Daena:

Fuck off with that.

Thirdly, the balance is totally off. Wahlberg basically spends one night as a slave to the monkeys, but he’s not particularly harshly treated, and then he busts out and on to the chase. This is Planet of the Apes, so I need to see the ape society in action, see the danger for the humans and the dominance of the apes. 3 minutes of not particularly threatening screentime, before a stupid chase where the hairless monkeys clearly outsmart and outrun the hirsute ones isn’t going to cut it. In fact, much like the rest of the film, it’s boring. It actually, weirdly, moves too quickly in the second half of the film- there’s barely a chance to stop and breathe and as such it becomes every difficult to give a shit about our heroes.

The writing as a rule of thumb is actually all over the place here. There’s a clever-ish bit of foreshadowing about the Oberon crashing and the genetically modified apes on board attacking the humans, thereby showing their whole religion to be fostered on a lie which isn’t too bad, but against that there’s so much that’s thematically all over the place. For example, Ari goes on at Leo about the way man treated Ape, and Leo says “We did much worse to ourselves” which is just such rancid sloganeering that I did consider turning it off (this is something I considered often while watching), and the final act is completely inconsistent and riven with plot holes. Leo rescues Pericles, and has his showdown with Thade (fine), he then tricks the General (fine), Attar comes in, and sees imprisoned Thade (fine), and then on Marky Mark’s say so decides to abandon his whole belief system and just take the human at his word (not fine). Wouldn’t he say “I’ve devoted my whole life to our religion, and your frankly stupid story is cobblers. Now stay still while I rip your head off”.  Or something like that anyway. The film is in such a rush to get to the twist, to play its trump card that it’s made a massive bollocks of the last act.

Then there’s the trump card: the twist. Roth hates it, saying that “I cannot explain that ending. I have seen it twice and I don’t understand anything.” And if he’s not got a clue then how the fuck are we supposed to? The twist ending is actually that the entire Ape Society is based on a lie passed down by Thade’s family, and that Apes was begotten by man. The incredibly poorly thought out Thade-in-Time nonsense strikes me as an attempt to add a classic Planet of the Apes ending, without the slightest idea of how to go about it. Burton is more circumspect reasoning that it was just an attempt to keep the story open for any possible sequels. What it is, is a gigantic mess and a kick in the nuts for apes fans and anyone that sat through the film.

Monkey Mark and the funky bunch

While wretchedly bad, there are bright spots to be found here. Burton sent his actors off to ape school (method acting as monkeys, for fuck’s sake) and the performances from Bonham Carter, Roth, and Giamatti really are far better than almost anything else in the film. Bonham Carter is all facial expressions as Ari, and manages to make the most of her prosthetics. Giamatti, despite the most cumbersome costume is superlative in the film, and Roth, who struggled with his makeup is gloriously OTT as Thade.

Which brings me on to the other great feature of the film: the Makeup. In it’s way, Rick Baker’s work here is as good as the work on the original Planet of the Apes. He’s gone for a profoundly more simian look to his monkeys than the earlier film, and Burton compliments this with ideas like them running on all fours, or using their feet to cheat at cards. This is a far more animalistic looking set of apes, and although anthromophicised to some extent, the combination of direction and acting gives them a much more authentic monkey feel.

Nevertheless, though, it’s still a shit film. Overall, I don’t recommend it, and I’d rather it didn’t exist. As basic ideas go, this is a good one, and the approach was spot on. Unfortunately, the script-writers couldn’t be arsed, the human actors were miles off song and the whole wretched farrago descends into a miasma of boredom and irritation. As much as I want to stick it with an Orangutan of Doom, I do concede that the makeup is first-rate, and the three main Apes do a good job. Therefore it can have half an angry monkey out of a possible 4.

That’s it, that’s the journey complete. I shall no longer be being spanked by the monkey. For the record this is my order of preference:

This is, in its total, a series that’s far better than its reputation suggests with only Battle and the 2001 version being actively bad.