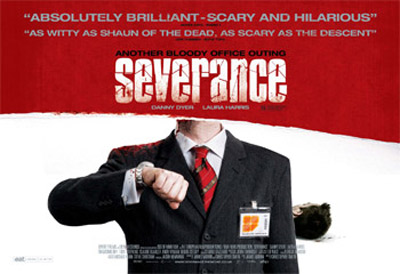 To take a small break from the relentless stream of low rent films that I’ve been sitting through, I’ve decided to review a British Horror film, of sorts, that came highly recommended by a variety of people. Unfortunately, I did bother doing a bit of research into it beforehand, although I really should not have done, because if I had not then I would not have noticed that Severance is directed by Christopher Smith, who made one of my most hated horror movies of the last decade in Creep, and that it stars Danny bloody Dyer again. Seriously, it feels like he’s in basically every single British movie of the last 5 years and I’m at a complete loss as to why. 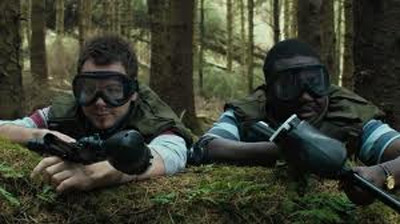 Holding out no hope whatsoever for this film, I was encouraged to see the first post-prologue scene on the coach, which was genuinely quite amusing. It doesn’t, admittedly, look that promising, opening as it does with a promotional video being shown on a coach but the comments from the aghast employees to it “It looks like a Hitler Youth recruitment video” are genuinely quite amusing. Still Danny Dyer is on hand to up the level of suckitude. Dyer is ultra-lad dickhead Simon, and we’re introduced to him ordering a couple of hookers from a website to meet them at their destination. He’s also ingesting a load of magic mushrooms, and smoking in the toilet causing the driver to throw a shit fit. A bit of deduction, based mostly on the Driver, here allowed me to work out that we’re in Eastern Europe somewhere, possibly Hungary. Anyhow, the Driver then throws an even bigger tantrum when he sees that the road is out. The boss, Tim McInnerny loses the battle of wills, and our intrepid band of cannon fodder are booted off and told to walk to the luxury lodge. In the meantime, the shrooms have kicked in, and Dyer thinks he can see balaclava clad nutters in the woods. Helped out by Maggie (Laura Harris), it’s understandable that nobody believes him. Sadly, he’s telling the truth, and the remainder of the film is a battle between some stranded war criminals and our little gang. So, nasty deaths, crap jokes and so forth AHOY!

No need to be squeamish now, Danny.

This film is simply not great. It’s not totally hateful, and there are a few gems of entertainment to be found (none from Dyer), but for the most part it’s a crap mix of action, comedy and horror that never properly gels. The problem, quite clearly, is Smith directing. He did go on to make Triangle, which aside from a third act meltdown is really quite good, but he also made Creep. Nobody should ever call Creep anything other than hateful torture porn crap, and that sensibility runs quite clearly through the film, even if it is toned down in comparison. This is an absurdly violent film, which I’ve got no problems with, but the violence and gore runs to the detriment of any actual tension, humour, and eventually, interest. 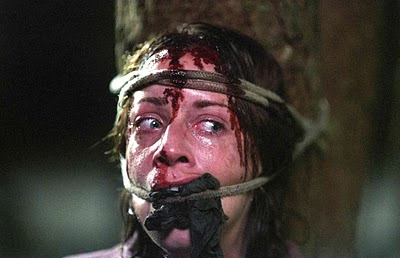 The script doesn’t help, playing as it does to Dyer’s tendency for laddish overacting by supplying him with lines such as “English birds ain’t complicated. You buy ’em a Bacardi Breezer and they’ll ride you like Sea Biscuit.” His character is, from start to finish, a complete fucking wanker, and the film makes the absolute most of it. Dyer, for example, finishes the film with another “ironic” reaffirmation of his uber-laddishness, which made me want to punch him (not for the first time). The other half of the problem is that it’s basically unfunny. There’s the odd good joke, particularly the retelling of the urban myths about why the Lodge seems to be abandoned, but for the most part it flirts with mawkishness at every turn as character after character proclaims love for Maggie. Which brings me on to the characters, or lack of. They’re all basically one note- geek Gordon (Andy Nyman) starts the film as a geek and is tortured to death as a geek, he’s got nothing more to offer. Or posh guy Harris (Toby Stephens) basically doesn’t have anything to give to the film at all. He’s just a posh Oxbridge grad and that’s it. The worst offender, though, is Billy (Babou Ceesay), who is a nice guy in love with Maggie. His death is exploited purely to try to drag some false sentiment out of us, and it’s completely unearned by the film. We just don’t care about these characters at all. 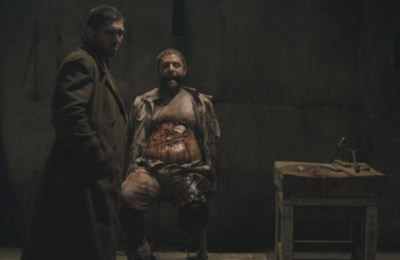 The actors are, clearly, hamstrung by the script as it basically gives them nothing to work with. McInnerny is recycling his Captain Darling performance as a supercilious middle manager, and Dyer is almost on autopilot. Laura Harris (good in The Faculty) works hard, and her character is the most completely fleshed out, and as such she puts in the best performance of the film. Aside from that though, there’s nothing really to remark at. Furthermore, the servicemen in particular are completely faceless and characterless, and as if that’s not enough, they basically lack any threat whatsoever. 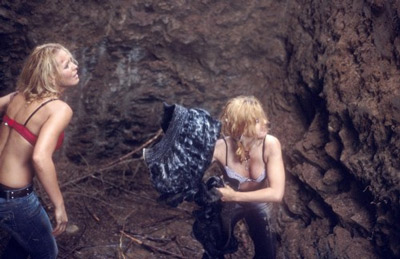 This is a brilliant idea, and the gratuitous hooker boobs don't hurt.

The second third of the film is quite easily the best bit- from when the realisation dawns on the characters that they are in the poop until the final third kicks in whips by and is generally quite entertaining. The problem is when it changes gears to being a slasher in the last third, and it hasn’t worked hard enough to break the conventions and just is not funny enough to sustain the transformation into a standard horror film without being boring. And boring it is, as we watch what’s left of our cannon fodder struggle to defeat the dedicated and far more professional bad guys. The film, actually, has made a major blunder by this stage and is forced to introduce a few more characters to keep the numbers up and give the soldiers more potential corpses in waiting.

Danny was a big hit with the ladies. Especially those that charge by the hour.

Overall, I don’t think Severance works as well as it is reputed to, but these hybrid films rarely do. The problem clearly is that it has bitten off more than it can chew, and is neither funny enough to be a comedy, scary enough to be a horror, action packed enough to be an action film and so forth. It’s an unfocused and mundane mess, and while there is enough there for it to avoid being total garbage, I can’t summon up the slightest bit of enthusiasm for it. If it’s on TV, then it will pass the time without particularly annoying the viewer, or being entertaining, but really, this film is pretty much the embodiment of meh. 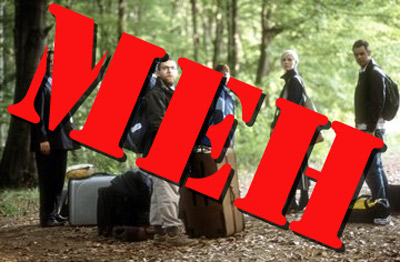 Not sure where to go for the next film in this series, so we’ll see what Lovefilm sends me. 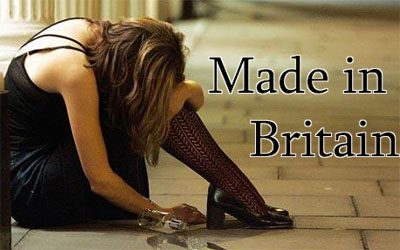