George Lucas, eh? Has one man sullied and defiled more childhood memories than Jabba the Neck himself? Remember that this is the genius that inserted the muppet band into Return of the Jedi, that produced Indiana Jones and the Crystal Skull, which took a massive dump on the characters from Raiders, and, worst of all, seems to be actively going out of his way to debase and demean his much beloved Star Wars characters? Darth Vader, one of the all-time great villains is now a mascara wearing goth douchebag, the Jedi themselves are clammy handed sexless cretins, Obi-Wan is a manipulative git, and Luke Skywalker has feelings in his naughty place for his own sister. Still, there’s one project out there that Lucas has had his claws into that still has a cult following- that film? Howard the Duck. Now, I remember this fondly, but I’m assured by everyone that it is actually a load of old cock, even if that isn’t worse than any other Marvel film out there. So let’s see what Just Pillow Talk thought of it… 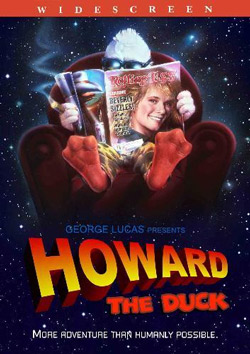 To be honest, I’m not really sure how to write up this review. To say that this movie didn’t exactly grab my attention is a vast understatement. The movie was directed by Willard Huyck and starred Lea Thompson (she certainly had a nice ass, which is on display in one of the most disturbing scenes in the movie), Jeffrey Jones, and Tim Robbins. Willard directed such movies as Messiah of Evil, French Postcards, and Best Defense, so naturally I would select him to direct a Howard the Duck movie. Actually I don’t know who should direct this movie because I’m not sure what the atmosphere should be in a Howard the Duck movie. I’m guessing that even though he first appeared in the funny books back in the early 70’s, he’s not really a character for the kiddies. So if the tone is more adult-like, who is actually going to watch a Howard the Duck movie? I mean, besides dumb bastards who are reviewing all Marvel related movies? I just can’t imagine there was a good target market for this movie. I can’t believe it made $38M back in ’86. What the fuck people? 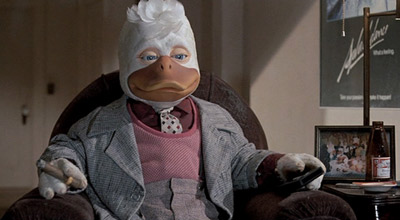 In retrospect, I could be wrong about this film.

Right, premise of the movie: Howard lives on some alternate type planet populated by ducks who gets sucked into our world due to some scientific experiment conducted by Dr. Jenning (Jeffrey Jones). What was the experiment? Beats the fuck out of me because I got up to go do something when they were explaining what had happened. In any case, Howard befriends Beverly (Lea Thompson) by saving her from being hassled by a couple of low-lifes after she leaves a club after performing. She’s the lead singer of a rock bank. It doesn’t take long for Beverly to warm to the talking duck and bring him home. Yup. Nothing strange here. Putting aside the fact that Bev ends up accepting him as quickly as she gets him to sleep in the same bed as her and kisses him….you have others like the good Dr. and Phil (Tim Robbins) having no problem with a talking duck. 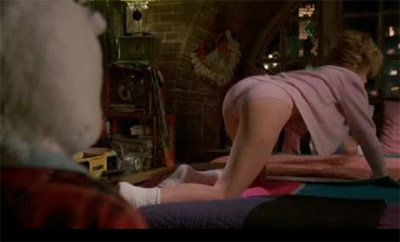 Wrong. Just wrong. And this isn't even the worst picture of this scene

I would have thought that, I don’t know, government agencies would have been on him like E.T. Suspension of belief, yada-yada-yada…but come on, this is ridiculous. I stumbled across this:

which gives you an idea of this movie.

I’m not going to go into the rest of the plot, but rather talk about the tone of the movie. In my estimation, one should be going for laughs when making a movie called Howard the Duck. You can go in one of two ways: more for kids, lighter in tone and humor, or, since he’s a beer drinking cigar smoking duck, go for a more adult-themed movie. In any case, he should be funny. Perhaps throw him in space since that usually works. What we have here is a movie that has zero laughs, zero interest, and zero charm. There is not a likeable character in the movie, least of all Howard. The budget was around what it pulled in from the box office. I have no fucking clue where the budget went. The effects are pretty crap, there’s no interesting set pieces, it’s not like it was a star-studded affair. Oh yes, Lucas’ name was attached, so I guess there you go. 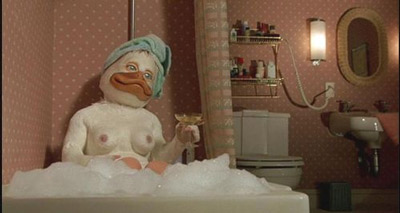 Now comes news that Pixar and Marvel are going to revive the Duck to the big screen. It’s going to be directed by the dude who did Monsters Inc. and Up. I have to admit, I’m a bit curious because clearly Howard belongs as a cartoon and maybe, just maybe, it’ll have some heart and soul with it this time. 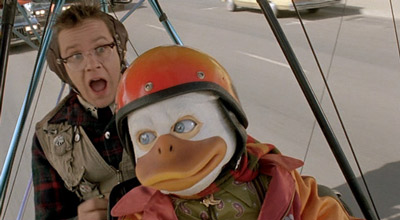 Robins has sat on the Joystick.

While this review is rather shoddy, so was the movie. It earns its zero rating since there’s really no redeeming feature, yet it doesn’t make one angry. Well sort of, fuck you Marvel! 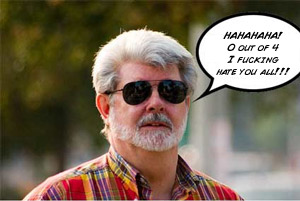 Jarv, keep that childhood memory intact and do not watch this.