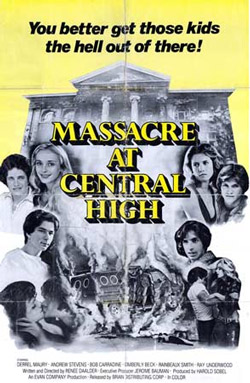 Who the fuck do you think you are, man?

I’ve fallen for this before, frankly, and been badly burnt. The first time was ContinentalOp’s hideous call on Thundercrack! (read the trauma here, it’s as funny for everyone that isn’t me now as it was then), and then TKD’s Galaxina failed to raise more than the odd chuckle. However, the amphibian slaughtering canine has been on about this one for a while, and I’ve finally found both it and the time to watch it when the missus isn’t here. So, with no further ado on TKD’s recommendation, I give you a Schlock Vault Special: Massacre at Central High, which despite the title, isn’t a slasher. Thank the Flying Spaghetti Monster.

Contains teenage kicks and spoilers below. 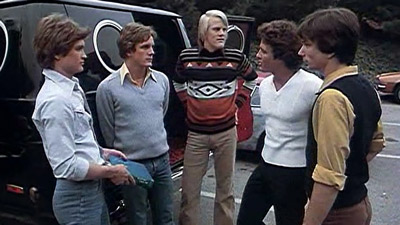 I don’t think I’ve ever seen anything quite like this before. On one hand it’s obviously exploitation, but on the other it’s also a deadly serious film with a deadly serious point. Directed by Rene Daalder, a Meyer protegé, Massacre at Central High is a political allegory about the dangers of factionalism, and yet it’s stuffed full of mixed messages, tits, bush, brutal and messy murders and all sorts of grotesquely inappropriate shenanigans. The nearest analogy I can think of is that this is Lord of the Flies crossed with Animal Farm for the exploitation generation, a brisk and sleazy little film with a deeply serious point.

Apparently being a Nazi isn't tolerated in this school..

David (Derrel Maury) is a new pupil at a strange school. Strange in that there are no teachers, and there seems to be almost no adult supervision whatsoever. His old friend, Mark (Andrew Stevens), takes him in and explains how the system in this school works. The Bullies Bruce (Ray Underwood), Craig (Steve Bond), and Paul (Damon Douglas) run discipline in the school with an iron fist and control the student body through fear, a point nicely illustrated when they dish a beating out to skinhead radical Spoony (Robert Carradine) for daubing a swastika on a locker. They do not, apparently, tolerate racial intolerance in the school. David’s first few days play out with him observing their assaults on Oscar (Jeffrey Winner), Art (Dennis Kort) and Rodney (Rex Steven Sikes) all of whom refuse his entreaties to help and tell him to stay out of the ruling clique’s way. David refuses Mark’s entreaties to pal up with the bullies as he thinks they aren’t all above board, based on his observation, a point less-than-pleasantly confirmed when he intervenes to beat them up to prevent them raping Mary and Jane (Cheryl Smith and Lani O’Grady respectively) for being Spoony’s girlfriends. His reason for intervening is that he saw Theresa (Kimberly Beck), Mark’s girlfriend and his only other friend, try to stop them, and it looked like she was going to be next. Rather than be grateful, the two girls tell him that he’s now a marked man. The bullies go to Mark, who promises to get David to fall into line, but consumed by jealousy after he spies David and Theresa skinny dipping, he reneges.

David’s only emotional outlet is jogging, a point noticed by the bullies. So, after Mark tells them that he tried to talk his friend round, they arrange an “accident” where they crush David’s leg, ending his running. This prompts a psychotic break in our young antihero, and he spends the next portion of the film meting out dubious accidents on the bullies. The school appears to have come to its senses, but as is always the way, nature abhors a vacuum and the various early victims begin to take control of the cliques and vie for power within the system. David, disgusted at this, then begins messily knocking them off. Only Mark keeps trying to intervene, and burdened by guilt over David’s leg, and horrified that it was his fault- particularly when Theresa reveals that David refused sex with her he attempts to diffuse the human slaughterhouse. Eventually, it becomes apparent that David couldn’t see sanity with the Hubble telescope, and his eventual plan is to blow up the school during the school dance (à la Heathers). Mark and Theresa play their final card, which is betting on the residual good will that he has for them. They attend the dance, and when he sees that they refuse to leave, he collects his bomb, and moves it outside where it detonates. Mark and Theresa blame the rash of bombings on the missing and very dead Spoony to preserve David’s reputation as a saint. Film ends.

A crushing blow for David.

This is an odd film, and a difficult one to write coherently about. The cast are all fine in their varying parts with Maury in particular chillingly psychotic. The best section of the film, by far, is the middle section where Art, Oscar and Rodney begin their climb to power much to David’s horror. Art’s speech about how he has the “power of knowledge” is creepy in its sincerity, and his exhortation that all the school needs is “leadership” which they can provide is the kind of dictator’s talk that starts revolutions. David’s utterly nonplussed reaction to it is something to behold, and the horror of what he has wrought is obvious on his face. This, also, is the clearest in terms of message section of the film- as mentioned, it’s a critique of factionalism in general and it’s interesting that the various students represent links to archetypical political stances- Spoony, for example, is a blatant Neo-Nazi. This is also the section that relies most on the acting from the young cast, and kudos to Daalder, because he coaxed good performances out of all of them. Incidentally, this can only be read allegorically for it to make sense, because David has no reason at all if you don’t assume an analogy for killing these kids. 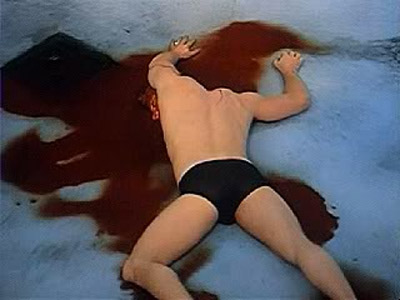 Should have checked if there was water in there first, Dumbass. You've just been Darwined.

The murders that populate the film are also amusingly staged. The hang-gliding death is flat-out hilarious, and the extended van crash that accounts for Bruce has a verisimilitude to it that is genuinely unsettling. This is not a quick murder, rather the van rolls down the hill for ages, scraping off crash barriers and bumping into obstacles before the inevitable tip over the cliff at the end. However, the murders in the final third are a fair whack more grisly and unpleasant- the sabotage of Art’s hearing aid causing his brain to rupture is nasty, and I’ll deal with the landslide that accounts for Spoony in a minute. It’s very strange, actually, because the film is deadly serious for the most part, and yet one of the deaths is a moron that’s been convinced to dive into an empty pool (this is funny).

Possibly some of the most gratuitous nudity ever filmed.

Massacre at Central High is also, against all odds, quite an exciting film. While the allegorical aspects are completely unsubtle, and Mark is obviously a weapons-grade dickhead, I did find myself rooting for him to stop the lunatic (although Daalder never treats David as such) before the climax. Theresa, on the other hand, is a hugely likeable character, and Beck’s performance is sympathetic enough that I found myself wanting her to intervene, to do something to stop the incessant bloodshed (such as give Mark a testicle transplant). It’s to the credit of the film that the incongruous nature of the tits and ass and the comical nature of some of the killings don’t detract from the growing sense of dread and the tension the film has generated. 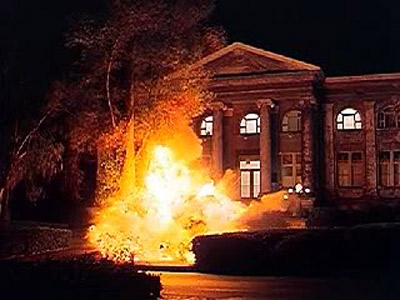 The faculty of Central High had finally settled on the best way to climb up the league table ladder.

Overall, this is a good film. However, it’s also more of an oddity than anything else- because it clearly shouldn’t exist and clearly should not have been made by an exploitation director. That it does exist, and does work is something to be happy about, but it isn’t anywhere near as clever as it thinks it is. It is wholly possible to enjoy Massacre at Central High as exploitation, but the political subtext is too obvious to ignore, so if you want to, it’s possible to enjoy it on another level. I do recommend Massacre at Central High, at the very least for Maury’s performance and the sheer strangeness of the tone. 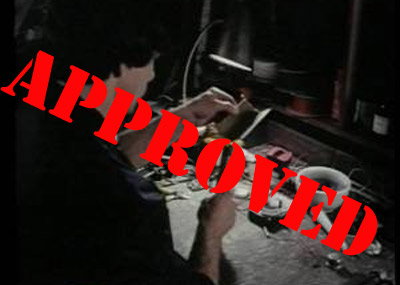 If anyone not called Droid (because it’ll be some hideous rom-com garbage) has any recommendations, then I’ll do this again.