British Cinema has a long and noble tradition of Kitchen Sink drama. Running back to the very start of the form, and arguably before it with the Angry Young Man playwrights, this genre has been a mainstay of our output. Some of the finest movies produced in these isles have fallen into this category, with Lindsay Anderson in particular championing the urban misery with films such as This Sporting Life. As the industry fell into terminal malaise, this almost seemed to be the only type of film we produced and the majority of modern British Cinema feels like it’s all set in a run down council flat with a miserable family in dramas directed by Mike Leigh, Ken Loach and Shane Meadows. Down Terrace fits right into this tradition, being a no-budget film directed by Ben Wheatley, written by Wheatley and Robin Hill and starring Hill himself and members of his immediate family.

CONTAINS URBAN MISERY AND SPOILERS BELOW.

Being a low-ranking criminal clearly isn't good for you.

Down Terrace isn’t big on plot. Opening with Karl (Hill) and his dad Bill (Robert Hill, Robin’s father) being narrowly acquitted from a serious drugs charge. They run a low rent criminal operation from a run down terrace house in Brighton, and it’s clear that someone has been informing to the cops. In the meantime, Karl’s girlfriend Valda (Kerry Peacock) is up the spout, and his mother Maggie (Julia Deakin) has become obsessed with finding the rat. Think Animal Kingdom in Britain. Eventually other members of the firm, such as Michael Smiley’s Pringle and David Schaal’s odious Eric turn up to take care of business. The body count starts mounting and events start spinning out of control, before a disturbing and incredibly violent finale.

That, actually, sounds like quite a plot. However, in all honesty, it feels much more sparse than that. The vast majority of the film takes place in the house, and there are a series of frankly bizarre interludes where aging hippy Bill takes down his guitar to inflict folk music on the family, or darkly comic exchanges such as Karl losing his love letters. This film is all about the character work from the generally very good cast. I can’t actually, believe that Hill senior hasn’t been in anything before or since because he’s absolutely outstanding here. Some of the cast, notably Schaal, Deakin and Smiley are “proper” actors, but the amateur Hill’s certainly do not let the side down. Schaal’s turn as the slimy and psychotic Eric is a top effort, being both nauseatingly ingratiating and genuinely unsettling. Nevertheless, my favourite performance is from Deakin, whose terrifying Lady Macbeth turn is almost as unhinged as Weaver’s stupendous (and grotesquely overlooked for awards) performance in the aforementioned Animal Kingdom. By far the best scene in the film, in my opinion, is when Maggie  decides that she knows damned well who the informant is, and takes measures by poisoning his lunch. As he flops around on the floor dying, Deakin coldly treats us to a summary of his flaws, her life and how she spends “her whole fucking time cleaning up after men”. It’s a cracking turn, and if Deakin wasn’t so on her game, would be seriously lacking.

The face of love on the dole.

Wheatley followed this with Kill List, which is a far, far more accomplished movie. However, stylistically Down Terrace does share an awful lot with its successor. The camera work is almost identical, being hand held and immediate, probably as a result of the limited budget, and fits in with the requirements of the genre. We expect, because of films such as My Name is Joe, to have “naturalistic” camera work, and as Down Terrace is firmly in this tradition, it’s entirely appropriate. He also employs the exact same use of sound in the climax of Kill List (the total absence) from the climax of this film. Down Terrace has been accompanied by a selection of English folk music (that’s strangely fitting) all the way through the film, yet in the climactic 30 seconds all sound is totally absent until the trigger is pulled, which is juxtaposed with a shot of a horse shying (this does make sense, honest). It’s profoundly effective, and profoundly depressing. 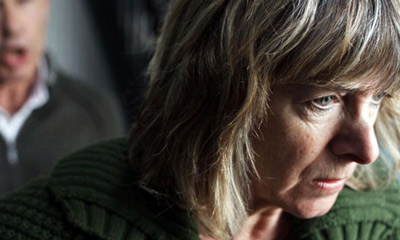 Maggie is worried that she forgot to put the quiche in the oven.

That isn’t to say that Down Terrace is a out-and-out misery fest. It isn’t. In fact, if anything, there’s a strong vein of dark comic humour running through it. Pringle, for example, is a hitman that is forced by his unhappy domestic circumstances to take his 2 year old son everywhere he goes. Smiley is also a dab hand with obscene lines, and gets to deliver a few absolute gems here. The other moments of levity that leap to mind are when Bill, who knows full-well where Eric is, tells Karl that the aforementioned thug has run away to Spain to open a club called “El Foxos” and the conversation between Bill and Maggie after Eric’s demise where Maggie sets him straight. The humour is very very dry, but completely fitting to the material and as the subject matter is so relentlessly bleak, the moments of levity are much needed.

"Next week on Blue Peter, we show you how to dispose of a gangster's corpse using only some cellophane, a spade and some sticky-backed plastic"

Overall, this is a good film. In fact, it’s one that flirts with greatness on more than one occasion. You can see the genesis of Kill List in here, because Pringle is quite, quite clearly Smiley’s character in that. It is also interesting to see a film that deals so heavily in the mundane nature of those that operate in the bottom feeding end of the organised crime ladder. However, by the same token, Down Terrace also isn’t anywhere near as good as Wheatley’s sophomore effort. Nevertheless, Down Terrace is a very good film, and one that I happily approve and do recommend if you like Kitchen Sink Drama with a twist. If that isn’t your bag, and I can’t say I blame you, then it may be one to miss and it also, while dealing with much of the same subject matter, also is not as good as the excellent Aussie Animal Kingdom.

It is, however, worth watching just to see Deakin’s phenomenal turn as a 21st Century working class Lady Macbeth. Stupendous.