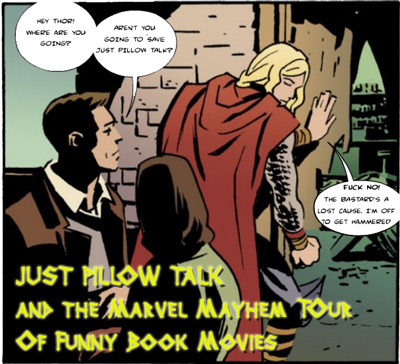 This is version 3 of the Thor logo, and I’d like to thank Droid for the wording.

Anyhoo, I rewatched Thor last night, and I almost think this might be the best Marvel movie not called Blade out there. Now, I know that sounds unlikely, because it’s dumber than a lobotomised Welshman (not sure you can tell the difference, actually), but nevertheless Kenneth Branagh’s adaptation of arguably the silliest Marvel Hero has several things that most of these type of films don’t actually have: a sense of scale, a sense of humour, and a good villain. So, credit where it’s due, Shakespeare scholar Branagh took an inherently dumbhouse idea and turned in a film that is far, far better than it has any right to be. When you think about all the po-faced joy-sucking efforts masquerading as Superhero films that Marvel has turned out, I really, truly believe that Branagh needs commending for this. Not that my opinion matters a jot, here’s Just Pillow Talk with his thoughts on the Mighty Thor…

The Marvel journey continues, this time in the land of Asgard. It’s home to the Gods, with Odin King of the Gods ruling with both wisdom and strength. His two sons Thor (Chris Hemsworth) and Loki (Tom Hiddleston) are vying to succeed their father as ruler of Asgard. They have very different views on what makes a great ruler, Loki is more of the thinker and schemer, where Thor is just brute strength. He would prefer to fight first and ask questions later. After the Frost Giants infiltrate Asgard, Thor takes the fight to them dragging along some of his friends. Even surrounded and vastly outnumbered, Thor is not willing to back down. Luckily for Thor and his friends, Odin arrives and puts a stop to the battle. This escalation of conflict with the Frost Giants greatly angers Odin who takes away Thor’s powers (along with the hammer Mjolnir) and casts him away to Earth to try to learn some humility and not be such an arrogant bastard. 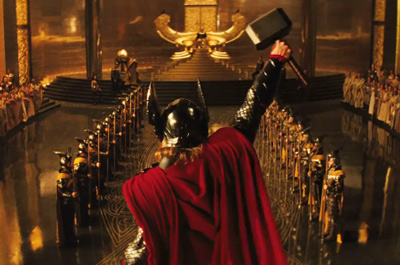 CAN YOU DIG IT? (Yes, I know I overuse this joke)

Thor promptly gets deposited right where scientist Jane Foster (Natalie Portman) is conducting some experiments in the New Mexico desert. They take him to the hospital where he, being a wee bit confused as to where he is, goes a bit ballistic and knocks doctors and nurses around. Even after they subdue him, he manages to wiggle himself free and escape. Jane Foster and fellow scientists track him down and don’t fully believe that he’s a Norse God. While at a diner, they overhear some locals talking about a hammer that landed some miles away from there. No one can successfully pick it up, as only one who is worthy can handle the hammer. The sly Odin…whispering sweet-nothings to Mjolnir so that only when Thor finally understands what it means to be a leader, can he again wield the powerful hammer. 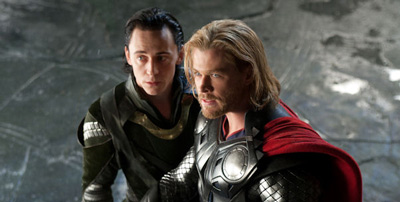 Loki wants to know what shampoo and conditioner Thor uses.

With a ride from Jane, Thor arrives at the spot that S.H.I.E.L.D has camped out at, surrounding the hammer. Thor quickly dispatches various S.H.I.E.L.D agents but, since he’s still a pinhead, can’t lift up the mighty hammer. He’s taken into custody and questioned by the same goober that’s shown up in the Iron Man films. Unbelievably they give him up to scientist Selvig (Stellan Skarsgard), who tells him to leave Jane alone and go his separate way. 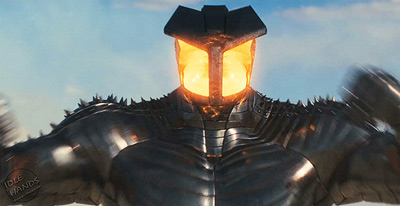 Meanwhile on Asgard, Odin has fallen ill and Loki has taken up the crown. Unknown to anyone, Loki let the Frost Giants into Asgard previously to prevent his brother Thor from taking up the crown. To ensure Thor doesn’t get in his way, he sends this robot? type thing (help me out Marvel people) to Earth to eliminate Thor. Thor’s friends also arrive on Earth and a battle ensues (quite one-sided) and the robot with flames from his mouth whoops their ass. Thor pleads to his brother Loki to stop the destruction and just deal with him alone. A swift backhand pretty much kills Thor, but that act of sacrifice sends the hammer zooming to Thor’s hand. Bye-bye robot with flames from mouth. Thor races back to Asgard to do battle with Loki, stopping him from destroying the Frost Giant race in the process. 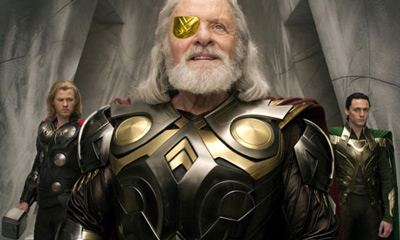 Right, I like this movie. I like pretty much all the performances, it cracks along at a fairly good pace, and the action is solid. Chris Hemsworth is good as Thor, much better than Chris Evans’ Captain America. He displayed the necessary arrogance for the God of Thunder before learning the error of his ways. Too quick a change? Yeah, it really was, but due to the performances and the way the story moved, I choose to overlook that. I like Tom Hiddleston as Loki, one of the better Marvel movie villains. In the context of the story (seeking their father’s approval, competition between brothers, being used by his father in hopes of a grander purpose), the villain here works as a sympathized one. Maybe not sympathized, since he is rather an evil bastard, but one who has daddy issues that work (a big fuck you to Lee’s Hulk…hehehe). He feels betrayed when he finds out his father stole him from the Frost Giants in hopes of uniting their two peoples down the line. His anger towards his father is real, yet he still loves his father, and even at the end so wants his father’s approval. Hopkins is solid as Odin, bringing the necessary weight to the role without overdoing it. Hell, even Natalie Portman is good in this. To me it seemed like everyone had a good time making this and I think it shows in the final product. It’s a fun movie and really a lot of the credit has to go to Kenneth Branagh, who really pulled off something I didn’t think possible. I laughed, nay scoffed, at the idea of this movie. And yet he made the most entertaining Marvel movie last year and one of the better ones overall. I know that’s not saying much, but it is an entertaining, fun movie and that’s all I want from a movie about a comic book. I give it 3 mini Thor’s out of 4.