Cassidy: I know, how inconvenient. Why couldn’t Ellie have had a nervous breakdown tomorrow?

Jessica:You know Cassidy, your sarcasm makes you sound like a bitch. And nobody likes a bitch.

Usual qualifying claim: While I think this is crap, the missus did really enjoy it, and it clearly isn’t as bad as some of the other remakes out there.

This remake trend really has to stop, and the sooner the better, frankly. I cannot think of one reason for Sorority Row to exist, given that it’s a remake of some crap 1970’s slasher movie that I’ve never even heard of, and the concept isn’t exactly high. This is, you guessed it, another of the identikit slashers out there, such as the absolutely awful Prom Night remake, or the even more reprehensibly awful When a Stranger Calls remake, that do not serve any purpose whatsoever. In the case of Sorority Row, though, it isn’t anywhere near as bad as those two previous examples, and the makers of it did at least understand what we want from Slashers for the most part: inventive deaths, boob, and the odd chuckle. Pity they nobbed it with an indescribably stupid ending with a twist that is astonishingly contrived and almost insulting to the intelligence.

To paraphrase the erudite Wolf: may contain pillow fights and spoilers below

The girls were really up the creek on laundry day.

Right, I’m not really very sure how to go on this one. It’s crap, and I mean obviously crap, but I really think I’ve kicked the shit out of these heartless remakes so many times that I’m not at all sure I’ve got any more gas in the tank. The whole flaming remake movement is just so heartless, derivative, soulless and depressing that the nearest analogy I can think of is Stock, Aitken and Waterman’s (s)Hit Factory that inflicted carbon copy plastic pop crap on the world for the decade. Or those “talent” show Winners whose first (and usually nowadays last) hit is an inevitable cover of whatever 80’s power ballad is fashionable at the moment (looking at you “Don’t Stop Believing”). Anyway, the point is that basically there’s nothing to see here, and this, frankly, is not the film I’m looking for.

"I have a plan so cunning you could pin a tail on it and call it a weasel. What we will do is tip this body down a big fucking hole, and never mention it again. This is a foolproof plan, and never once in the history of cinema has it gone wrong and inspired a lunatic to start slaughtering us"

It all starts quite promisingly, actually, with a pyjama party in the Theta Pi sorority house. I’m well on board with this, as any film that opens with a pillow fight between hot chicks in their underwear bouncing up and down on a trampoline is clearly a film that I’m going to like. Then there’s some gratuitous titties, so things really are moving along swimmingly. We’re introduced to nice girl Cassidy (Briana Evigan). Her and her revolting cohort of she-bitches are in a bedroom doing shots of tequila, watching a laptop of one of their friends Megan (Audrina Patridge) be molested by Chug’s (Margo Harshman) brother Garett (a hopelessly OTT Matt O’Leary). He’s and this is fucking reprehensible, dosed her with Rohypnol on the orders of queen bitch Jessica (Leah Pipes in the best performance in the film). She starts convulsing and vomiting all over the place which horrifies Cassidy, Ellie (Rumer Willis) and Claire (Jamie Chung).

We’re then introduced to the fact that this is probably the least funny practical joke in history. It’s quite, quite startlingly unfunny, actually. Anyhoo, our group of heroines and a mortified Garrett, take the “body” out to an abandoned mine to “dispose” of it. Quite how long they were going to string this poor fucker along is a mystery to all concerned. Before you can say “stabbed in the lungs”, in a spectacular and boneheaded act of absolute fuckuppery, Garrett has, unbelievably, actually stabbed Megan in the lungs and fucking killed her. 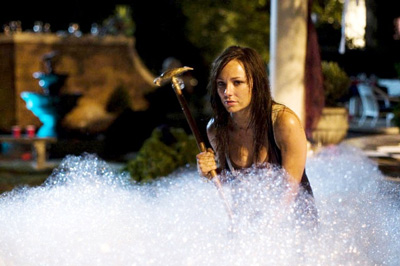 Cassidy proving that chicks dig bubble baths no matter how inappropriate the circumstances.

So, we move on to the “I Know What You Did Last Summer” scene, where Jessica persuades the rest of the girls and a clearly hysterical Garrett to dispose of the body.

Fast forward one year later and Cassidy has moved out of the house. The girls are all graduating, and Mrs Crenshaw (house owner), played by a slumming it Carrie Fisher, is turning the house over to the girls for one last night of partying. They all receive a text message with the video of Megan dying, and before you can say “homicidal fucknuckle”, they start getting killed with a modified tyre iron. The only question is, does someone know or did Megan inexplicably survive to take revenge…

The film tries damned hard from this point on to throw red herrings around like a demented fisherman suffering an epileptic fit. There is candidate after candidate introduced that could be the killer: Garrett, Megan’s sister, Jessica’s boyfriend etc etc etc. Annoyingly, the writers Josh Stolberg and Pete Goldfinger, didn’t think it out properly and the one person it could absolutely not be is the one person they go for. I won’t reveal who it is, but, well, bah. How shit. Not to mention that the very last shot of the film is such obvious sequel bait with a “new” killer that it made me quite angry. Needless to say, I will not be watching any sequel. 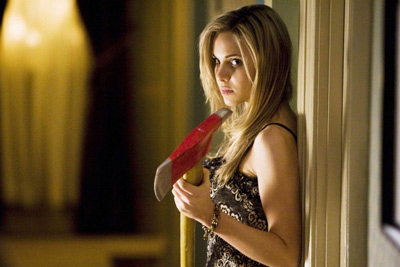 Who wouldn't like Jess here to handle their chopper?

So, rather than being a miserable grumpasaurus about this pointless loaf of a film, I’m going to try to look at the positives. We’ll start with the acting, which is patchy. Evigan, again, proves that she’s far, far too good for the teeny movie crap that she’s landed herself in, and Pipes is absolutely fabulous as the bitch (I’m not convinced she’s acting). On the other hand, O’Leary and Fisher are both actively bad for different reasons (although Carrie breaking Jessica’s nose with a shotgun represents a high point of the film). O’Leary is chewing scenery with real fervour but no sense of fun, and Fisher quite clearly couldn’t give a fuck. This is a Madsen level of “couldn’t give a fuck” if I’m honest. Not to mention that her character is totally not needed for the film. Then there’s the unfortunate looking Rumer Willis. I actually feel quite sorry for her, for reasons that I’ll come into in a minute, but, she’s pretty goddamned poor, if I’m honest, and nowhere near attractive enough for this cast. These are all alpha-females, and the frumpy, pudgy, glasses-wearing Ellie shouldn’t be with them.

The kills themselves, particularly the way Chugs checks out, are satisfyingly messy, and the gore isn’t exactly restrained here. Incidentally, why was this film only a 15 in the UK? The original Prom Night was 18 and this has far more in the way of tits, violence and really painful looking murders in it than that rather tame 1970’s slasher? It’s also, on more than one occasion, a touch mean-spirited (did we need to see Claire expiring with the flare burning her face off, the point was made, damn it). Nevertheless, the weapon of choice is well conceived, and the murders themselves are, no pun intended, executed well.

Mrs. Crenshaw is a badass. Who knew? (That sadly is a line of dialogue from the film, and she isn't.)

Right, I can’t do this any more. Fuck this film. SPOILER TIME

There are just so many problems here, and it’s all because of the stupid fucking script. Leaving aside the odd piece of mildly amusing dialogue, usually from either Cassidy or Jessica, there are just so, so many idiotic blunders here. The identity of the killer is incredibly misconceived, being as it is Cassidy’s boyfriend Andy (I was lying earlier about not revealing it), and his motivation is almost beyond reprehensibly stupid. Furthermore, the cretinous attempts to keep convincing the audience that Megan may be alive are a frankly epic failure on every level. We, and I can’t believe I have to point this out, WATCHED HER BLEED TO FUCKING DEATH AND THEN GET THROWN DOWN A MINE SHAFT. IT IS ABSO-FUCKING-LUTELY INCONCEIVABLE THAT ANYONE COULD THINK THAT SHE WASN’T FUCKING DEAD. Furthermore, our characters aren’t morons, especially Cassidy and Ellie, and as such there is no way that for a second they could think it was Megan.

Briana hoped there wasn't a tiger in the basement (with or without hat). Well, actually, she didn't, because if there had been she'd have been in Burning Bright, and that's a good film.

In fact, there is a plausible candidate out there, and he steps up to the plate just before Andy. That man is Jessica’s boyfriend, and his reason for it is that he’s a senator’s son, and needs to cover up the scandal. However, he’s aced by Andy who, aaargh, is doing it because he loves Cassidy and wants to protect her forever. By chasing her around a Sorority house with a home-made weapon.

"I did it for you, babe." "Christ, couldn't you just have got fucking flowers like a normal human being?"

Then there’s Ellie. Willis is fucked here, frankly, because Ellie is an annoying, whiny and unlikeable character. In a sane and sensible world, she’d have been cut into kibble really early on, with the good looking and likeable characters surviving. The film’s climax, however, relies on her transforming into Sarah fucking Connor out of the blue and gunning Andy down with a shotgun.

Sigh. This is so lame.

Overall? This may come as a shock but I don’t recommend this. Evigan seems to be on a one woman mission to overtake Danielle Harris as the queen of shite horror, and as much as I like her (and Harris too for that matter), her only good film is the great Burning Bright. Someone needs to get her out of this shite (I see she’s in the Mother’s Day remake as well) and get her into something not written by an autistic monkey. Maybe Ti West can cast her in something. Anyhow, Sorority Row isn’t a boring film, but it is an annoying and astronomically stupid one.

I have been known to Orangutan of Doom these type of films before, but as there is a shedload of gratuitous nudity here, and Evigan is better than the material, not to mention that it’s miles better than When A Stranger Calls, it can narrowly avoid the very unhappy ape.