Due to Mrs. Jarv’s quite unjustified hatred of GIANT PIG movies, it’s been a while since I started this trilogy, as I had to manoeuvre her into a mood whereby she’d tolerate me rewatching Pig Hunt on the main TV. You will no doubt be pleased to hear that I made an inordinate sacrifice for your entertainment and as such I have put up with an interminable amount of repressed aristocrats pouting at each other as she’s inflicted the entire fucking series of Brideshead Revisited on me as her price. Let me tell you now, I’m severely cross with myself for this, as there is no way in fuck that this, frankly, fucking awful movie was worth even 2 minutes of Jeremy Irons gazing longingly at Anthony Andrews’ arse while the latter moans about his frigging teddy bear, pretentiously called Aloysius, refusing to talk to him. That, by the way, is not an exaggeration.

Admittedly, repressed aristocratic benders don’t have a huge amount to do with Pig Hunt. Nothing at all, in fact, and I should really stop waffling on about it now. Pig Hunt is a 2008 Fangoria produced movie directed by Jason Isaacs, a man with usually a good grasp on schlocky horror that’s sadly deserted him here. This film is such a fucking con, it really is, promising much hogzilla action and delivering less bacon than a Sainsbury’s economy pack. Instead, we’re treated to some sort of hideously boring and annoying mish-mash of redneck hillbilly horror and random crap that has less than zip to do with a GIANT PIG or even a pig of not unusual size.

Squeal like a Piggy! Actually, that's just reminded me of Deliverance, which is a really good film. Go and watch that, and ignore this tripe.

John Hickman (Travis Aaron Wade) is a colossal douchetard living in San Francisco (home of the douchebag) with his hot Asian girlfriend Brook (Tina Huang, the only thing worth watching in the film). He’s inherited a shack in the words and is going on a celebratory Pig Hunt with his arsehole mates ex-military Ben (Howard Johnson Jr), Wayne (Rajiv Shah) and fat ass Quincy (Trevor Bullock). In a hi-fucking-larious jape on the way up, by the by, the driver accelerates at an inopportune moment jamming Brook’s norks into fatty’s face. She’ll never get that bacon grease out. How funny was that? eh? fucking hilarious. Anyhoo, he meets up with an annoying hippy cult led by Bryonn Bain, and his old redneck mates Jake (Jason Foster) and Ricky (Nick Tagas).

Yes, this is every bit as shit and annoying as it looks.

On the hunt, Jake goes on and on about a mythical 3 ton boar called Ripper, that they’re desperate to bag, but there’s no sign of the giant porcine fucker. They blunder across an enormous marijuana field, an argument ensues and in a spectacular moment of fuckuppery Ricky is killed. Jake is, understandably, a touch upset by this and raises his entire clan to take revenge on the city boys. Carnage ensues, although hilarity remains strangely absent, as the locals attempt to garner revenge on these upstart soft urban tossers. Ben, in the meantime, escapes and finds a load of naked chicks bathing. He’s snared by these evil hippy sirens (before you get overexcited by the quite impressive amount of gratuitous norks, I’ll just throw a bucket of cold water on this by pointing out that most of them are terrible) and led to a mysterious pit where something, as yet unseen by us, awaits him.

Again, in the meantime, Brook and John have managed to decimate the ranks of the rednecks and also made their way to the cabin. John is imprisoned and Brook lured into the pit. Jake and the last surviving clan members turn up, wreak absolute havoc, GIANT PIG finally makes an appearance, and John kills him with a crossbow bolt to the brain.

Tricked by boobs. The fool.

This film is absolute unmitigated honk from start to finish. It’s not a GIANT PIG film in any way, shape or form and the 5 minutes of jerky puppet porcine action at the end singularly fails to deliver on either the premise or the excellent cover art. This is an astonishingly shit film on almost every conceivable level with it being obnoxious, boneheaded, confused, and generally fucking awful. Huang represents the sole saving grace of the film by not only being, clearly, utter filth, but also putting in a steely performance of far more competence than the inconceivably shit script deserves. Actually, therein lies the problem with the film, the script is awful. There are simply far too many characters and they’ve got the collective depth of the average Kate Hudson role. They’re just an intensely annoying group of poorly written stereotypes, and frankly having each of them die one by one is a blessed relief. The sole intentional laugh of the movie comes almost at the end where Ben is confused and seduced by the abundance of boobs, and unable to grok what they’re saying to him. Jake shows up shortly after and they try the same trick on him, and instead of falling for it, he puts a couple of rounds in each of them. That’s a pathetic level of comedy and a huge disappointment from Isaacs, whose Jason X is probably the best of the Friday 13th films and is stuffed full of laughs. 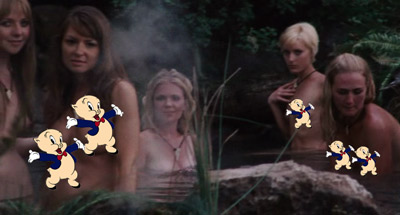 Porky Pig is helping to hide the shame of terrible boobs. Aside from her on the left, which I seem to recall being quite good if a bit obviously fake. Just be thankful I didn't go with the really obvious bathing pigs being hunted joke here.

I get that they clearly didn’t have the budget to make a proper GIANT PIG film, and we all know about the problems inherent with that genre, yet, Pig Hunt is still just damned confused. Why is the GIANT PIG even in it? He adds practically nothing to the story at all, and if you remove the distraction of the naked lesbo hippy commune then the film would be markedly improved. It would, actually, be an infinitely less annoying film were it to be a straight evil redneck movie, and as the vast majority of it deals with the conflict between the city folk and those evil gun-toting inbreds in the countryside, it would have been better served without the gimmick of GIANT PIG. Even then, though, it would still be absolute fucking tripe, as this isn’t exactly virgin territory that they’re mining, and if I wanted to watch that then I would watch the vastly superior Deliverance again.

I’ve had enough of beating the shit out of this ugly, moronic and confused movie, as the entertainment value held here is virtually nonexistent so I’m handing over to GIANT PIG for his summary:

I hunted high and low over the internet, and this pathetic effort is the best shot of HOGZILLA that I could find. Apologies.

WHAT IS THIS DRIVEL?

ARE YOU TRYING TO INTENTIONALLY ANGER THE GREAT AND TERRIBLE GIANT PIG?

THIS IS UNACCEPTABLE PIG SHIT AND I AM ENRAGED AT YOUR SULLYING THE GOOD NAME OF GIANT PIG BY ATTACHING IT TO THIS PAINFUL AND ANNOYING NONSENSE.

I AM FURIOUS WITH YOU, MEATBAGS, AS YOU HAVE FAILED ME.

THE PENALTY FOR SUCH FAILURE IS THAT I SHALL TRAMPLE YOU BENEATH MY CLOVEN HOOVES AND GORE YOUR REMAINS ON MY MIGHTY TUSKS OF DOOM.

NOW GET THE FUCK OUT OF MY SIGHT AND LET US NEVER MENTION THIS ATROCITY AGAIN. ELSE YOU FEEL THE WRATH OF THE AWESOME GIANT PIG!

So, understandably, the pig hates it, and I have to say that I totally agree with him. Pig Hunt is an enormously bad, irritating and inept film, and don’t touch it with a bargepole.

The concluding part of this Trilogy is next, and I’ve saved easily the best film for last with Australia’s Razorback.