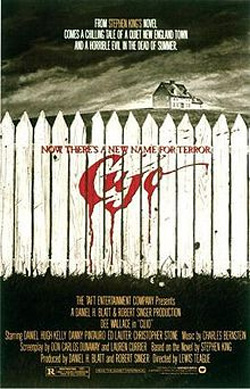 Stephen King famously said that he has almost no recollection of writing Cujo, due to a quite heroic level of alcohol abuse. However, the premise is fairly simple and it is one of his most streamlined novels, so we should be thankful for the shaky hand of Vladimir Smirnoff that was on the tiller. Particularly given that he’s making serious attempts to retcon everything he’s ever written into the Dark Tower Universe, and Cujo is absolutely impossible to tie in to that vision; not unless the dog is possessed by Flagg or something, and even King isn’t daft enough for that. 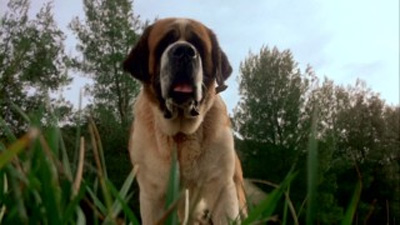 The story is quite inordinately simple. Brett Camber’s (Billy Jayne) Cujo is a large and lovable St. Bernard, who one day makes the mistake of getting his snout trapped in a rabbit burrow. Ordinarily, this isn’t much of a problem, except the poor bugger has managed to find a burrow filled with rabies carrying bats. Before you know it, he’s been bitten with famously disastrous consequences. In the meantime Donna Trenton (Dee Wallace) is having an affair with Steve Kemp (Christopher Stone). Her husband Vic (Daniel Hugh Kelly) knows about this, but is struggling with financial problems. Eventually, Donna and her son Tad (a quite remarkable performance from Danny Pintauro) are trapped in their old Pinto up at the Camber garage where an enraged and completely out of control Cujo terrorises them. The only question is- will they die of dehydration or dog bites?

There is quite an inordinate amount of set up here. Bear in mind that Cujo is bitten by the bat in the opening frame of the film, and Donna doesn’t make it up to the Camber place until the half way point. Usually, this would bore and piss me off, because I really want to watch a large and angry dog maul people, but in this instance the story absolutely requires it. There just has to be a plausible reason why the disappearance of Brett Camber, Donna and Tad doesn’t arouse suspicion- and it’s here in spades: Brett is taken away by his mother from the abusive Joe (Ed Lauter), while Vic has to be out of town to salvage his career and think about his marriage. Furthermore, one of the killer problems of horror movies is if we don’t give a red fuck about the characters. By working so hard to establish them, we do care- we care that Donna knows she has made a mistake (and King blatantly knew, because the entire second half of the film is obviously him punishing her/ women in general for being sluts), and despite her affair we do like her and root for her. This is in no small measure down to Wallace, who puts in an absolutely stupendous performance in a little horror movie. Vic, on the other hand, is a bit of a prick, but that’s fine, because he’s obviously suffering and it is him that raises the alarm. On the other hand, Stone can’t give Kemp a much-needed air of craziness. You don’t buy that he would snap and destroy her house because she dumped him, and therefore the red herring that delays Donna’s rescue just isn’t very effective. 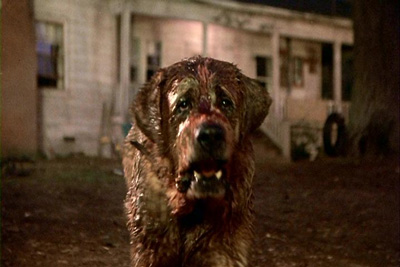 Nevertheless, I don’t really want to talk about what doesn’t work in Cujo, because there’s a hell of a lot to like here. The second half of the film packs a real wallop as Donna and Tad’s situation worsens. Their options start to shrink and they are, frankly, dog chow. Cujo doesn’t full on assault them constantly, rather he’s a watchful presence outside the sanctuary of the car, just waiting for the opportunity to go to town on them. Whenever Donna does make an attempt to get out, he’s on her in a flash, a mass of slavering jaws and feral barking. There’s a sequence just after she’s bitten where the camera pans around in circles inside the car, accelerating in time to the crescendo of Donna and Tad’s screaming that is stunningly effective. It’s a very simple idea, but it instills panic in the audience, because we can share the predicament of the two main characters.

Then there’s Cujo himself. I’ve got mixed feelings about him, if I’m honest. On one hand, he’s superbly trained, and the transformative doggy make up is very well considered and thought out. There’s a scene where Brett says goodbye to him and he lollops out of the mist to see his boy one last time that screams of tension. By this stage of the film, Cujo is a very sick puppy, yet through clever lighting and cinematography you get the feeling that the dog still loves the boy and knows that if he doesn’t get the fuck away from him then he’s going to do something that he’ll regret. It’s actually quite sad in a way watching the giant St. Bernard’s form recede into the mist, and full marks to director Lewis Teague for this. 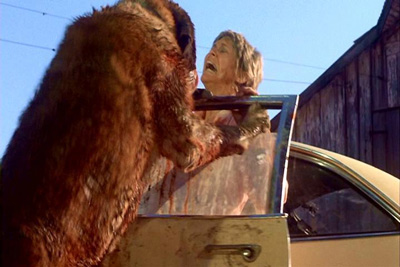 However, there are some dogs that are intrinsically frightening. Think Rottweiler, Doberman, Alsatian, Pit Bull etc. These are all look like big, fierce aggressive fucking beasts that will rip you limb from limb given half a chance. Then there are some dogs that just aren’t scary in the slightest, such as the crap dogs like poodles, etc. St. Bernard’s are not scary animals- they’re great big slobbering balls of love and cuteness with sad eyes and a famously generous temperament. What were St. Bernard’s most famous for pre-Cujo? Climbing up mountains with brandy for struggling mountaineers. This is just not an intimidating breed, and that’s despite the fact that they are bloody big animals. Cujo in particular suffers from this, because no matter how good the pooch make up is, and it is as mentioned really good, he still spend a lot of time sitting outside the car with his head in his paws and big mournful eyes staring at the trapped family. Furthermore, no matter how well trained, you can’t undo an animal’s basic nature and at one stage when he’s supposed to be savaging them he’s on his hind legs barking like Cerberus himself and his fucking tail is wagging. This is all clearly a great game to the dog.

Nevertheless, since King wrote the St. Bernard into the book, the film is lumbered with it- and it does work hard to compensate for a lot of the innate lovable nature of the animal. He’s filthy and blood encrusted, and looks about as feral as it is possible to make a big friendly beast look, and the film does handle his descent into madness really well. If anything, actually, the contrast between how loveable the dog is at the beginning compared to the killing machine at the end should be a strength of the film, but there’s no escaping the nature of the beast. 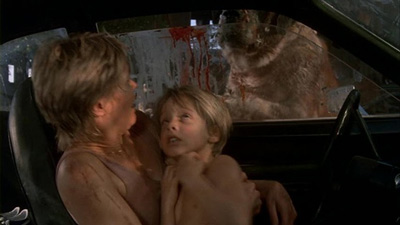 Overall, I do recommend this one. It’s probably the most famous killer dog film out there, and this is for a damned good reason. It’s a very effective film, and also a surprisingly touching one, and if you haven’t seen it then I do suggest that you look it up, even if only for the performances of Pintauro and Wallace. Just be warned, though, don’t expect mano-e-poocho action from the beginning, because there is a lot of set up here. 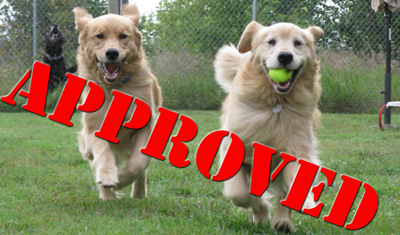 Next time, I’m not particularly sure what film to go for as I’ve got so much choice, but it’ll be hard to live up to this one.