Release date: January 29 (UK). Wow, the 70’s already. Have to say I was long overdue a return to this one and thanks to a near as dammit UK release I finally get my chance. May contain cowboys and spoilers… 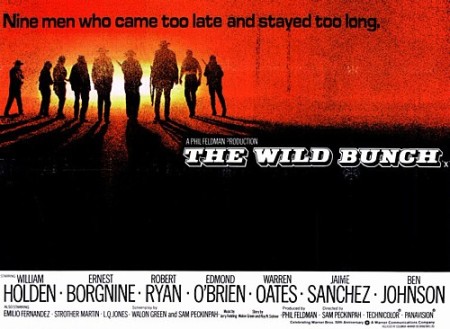 At the time, many critics felt that The Wild Bunch glorified violence. I am at a loss as to how intelligent writers might arrive at such a conclusion. Logically, I’d have to conclude none of them were intelligent, but surely that’s too simple an explanation. I’m not disputing a high percentage of cinema-going punters were drawn to the ultra-violence, Peckinpah himself was reportedly mystified and disgusted by such open bloodlust in his audience. The violence is brutal, gory and ugly. How can anybody glorify it, revel in it? Of course, the final showdown is operatic, iconic… When anyone ever mentions The Wild Bunch I immediately think of Lyle Gorch, his creased white shirt stained with claret and sweat, screaming as if in orgasm as he mows down Mexicans with a Browning M1917 machine gun. But I also see those two kids near the start of the film, bystanders as the opening shoot-out messily unfolds, hugging each other in terror as the bullets whine around them. It is arguably the most potent image in The Wild Bunch and haunts long after the scene is over. That the critics saw this, yet chose to continue bashing the perceived pro-violence beggars belief.

Peckinpah set about destroying the archetypal Wild West Hero. There are no heroes in The Wild Bunch, Peckinpah lays that out in the cold light of day. Outlaw Pike Bishop (William Holden) and his Bunch are after railroad cash. Deke Thornton (Robert Ryan) and his posse of dissolute bounty hunters are there to stop them. Both men will show no mercy to the innocent townsfolk caught in the crossfire. What do you do as an audience? Holden and Ernest Borgnine are not going to essay ‘the loveable rogue’ for you; they’re bad men. They will kill anybody who’s in their way. So, you look to Ryan, he’s the good guy, right? Uh-uh. He’s fresh out of clink, he’s only doing this to get a full pardon. Yet, there are signs that he is a man of honour. He despises the filth that railroad boss Harrigan (Albert Dekker) has saddled him with, hired mercenaries who, like vultures, squabble for the leftover scraps of a kill. But he’ll work with them all the same, just to get back at his ex-partner for splitting on him. These two men are entrenched in pride; part of Deke accepts that Pike had to run or be captured along with him, or killed even. Part of Pike knows he should have stuck by Deke and every day since, the guilt has been gnawing at him, finally spilling over when he has a go at Tector Gorch; “When you side with a man, you stay with him and if you can’t do that you’re like some animal, you’re finished!” He’s keen to see his mistake never repeated. Pike and Deke should just sit down and talk it through over a Mint Chip Frappuccino.

Pike, set to wander forever between the winds...

Pike Bishop is running from a lot of things, the law being the least of them. He’s a man out of time, the world is moving on. Dutch (Borgnine), through Pike, awakens to it. The brothers Gorch (Warren Oates, Ben Johnson) and Angel (Jaime Sanchez) are just too dumb to see it. Maybe not all the way dumb; maybe they just don’t want to face a future where destiny is out of their hands. They know it deep down though and by the end of the film they will embrace the cannonball marked ‘Progress’ and ride it all the way into a Mexican General’s lair. One of the saddest sights in the film is of them marvelling at a motor car. The age of the gunslinger is at an end and only Pike recognises it; “We’ve got to start thinking beyond our guns. Those days are closing fast.” But he won’t be getting a ticker-tape retirement parade, or a decent work pension. There will never be a final job; he knows it, because that’s all he knows. He’s like the bloke at the beginning, begging to be shot because he can’t keep up with the gang anymore. Pike wants to be put out of his misery. There’s no place for him in this new era, not for any of them. They can talk of one last big score to set them up for life, but do any of them really look like pipe & slippers blokes to you? It’s an unattainable reverie. They are what they shoot; take those guns away, they’re castrated.

An unremitting nihilism, more than anything else, drives Pike into battle with Mapache (Emilio Fernandez), the crazy General the Bunch have agreed to steal weapons for. Of course, freeing Angel is a good enough reason but Pike wants a dust-up, he knows Angel isn’t gonna be handed over wrapped up with a ribbon on. Peckinpah’s genius is he sets the audience up for the heroic shoot-up; four men, barely washed, hung-over, swaggering into the midst of a (mostly) drunken army of, what… 200, 300 Mexicans? But you don’t get heroics; it’s chaos, there’s no plan, it’s blind fortune these men make it as far as the Browning. Once there, where else is there to go? I reckon they might find an ‘Open’ sign on Hell’s door, at least. Pike’s taking his loyal Bunch down with him and they don’t even notice; they’re indestructible in the moment, just keep shooting till you run out of targets or run out of luck. Pike gets shot in the back by a whore. “Bitch,” he snarls before capping her. It’s insanity. If Kurtz were here, he’d probably say; “The horror… the horror…”

The Wild Bunch is beautifully shot ugliness. Even the youngsters’ idea of fun is ugly, tipping a couple of scorpions into a red ant nest. They got some sting but there’re just too many ants. Then the kids burn the lot. As foreshadowing it’s not subtle, but there it is.

The not so magnificent seven...

Performances… it’s hard for me to look beyond William Holden. Maybe he too thought his time had come and gone as an actor. He brings something tangible, a connection I felt more strongly with the film this time, riding off into my autumn as I surely am, while the young bucks whoop and holler at my passing. He’s tired, cornered, desperate. When he fucks up mounting a horse in front of the Bunch, the sight of him slowly trotting away, watched by Dutch and Sykes (Edmond O’Brien) is somehow heartbreaking. On the other side, Robert Ryan is doing the same thing to a lesser degree. He starts out fuelled on revenge yet reaches a crossroads with his own motley posse to the point where he is forced to growl a painful admission; “We’re after men. And I wish to God I was with them.” Sykes offers him the chance to ride out again, though concedes; “It ain’t like it used to be, but it’ll do…” And Deke takes it. But there’s no joy in his acceptance, they’re just prolonging the inevitable.

Borgnine’s Dutch is Pike’s conscience. You can sum it up in one superb exchange, as they discuss Deke Thornton flipping to the other side and we see Pike’s regret naked and a skewed sense of honour…

“He gave his word to a railroad,” Dutch snaps back.

“That ain’t what counts! It’s who you give it to!”

… I guess Dutch is just as skewed since he’s thrown in with a killer and a robber. But if you’re waiting for Dutch to rescue Pike’s soul, Hell’s more chance of hiring a snowplough. He laughs when Pike puts down Mapache. Laughs. It’s a lonely sound.

The Bunch get ready to rumble

Edmond O’Brien is a revelation as Sykes. I’ve seen O’Brien in a few films but I never thought he had this performance in him. Sykes isn’t thinking about endings; he’s a survivor. It’s a great moment when he mocks the Bunch for returning from the botched railroad robbery with bags full of washers – “Here you are with a handful of holes, a thumb up your ass and a big grin to pass the time of day with!”

Everybody else gives solid support, not least Oates and Johnson as Lyle and Tector Gorch. Strother Martin, LQ Jones, Albert Doctor Cyclops Dekker, Jaime Sanchez, Bo Hopkins (brief but memorable), plus the artistry of the crew… they all help paint a picture. I’ll give the last word to the revolutionary Don Jose (Chano Urueta); “We all dream of being a child again, even the worst of us. Perhaps the worst most of all…”

Those children at the beginning, wide-eyed and afraid as the guns go off like howitzers around them… what do they dream of?

I’m giving The Wild Bunch 4 Bloody Squibs out of 5.