Here we are back with Just Pillow Talk in the world of funny book movies. In a year full of disappointing films, Captain America: the First Avenger, failed to stand out by once again being another glorified trailer for this year’s nerd wankfest The Avengers. Still, Evans is likeable enough, and they did make a lot of smart choices, so maybe it worked out OK for him. Let’s find out… 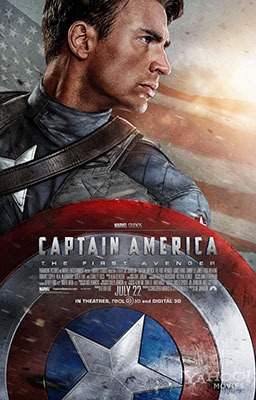 I’ve decided to jump ahead to one of the “better” Marvel films, at least at first glance that’s what appeared to me after seeing it the first time. The question is, would it hold up to a repeat viewing? To say that numerous Marvel films have failed to live up to my initial viewing or after a good chunk of time in-between viewings is quite the understatement. The Spider-man films really are not good films. The best of the bunch, number two, is still weighed down by miscast actors and horrible ‘romance’ storyline. The X-men films get bogged down by just being plain boring and giving the shaft to all but really one character.

The film opens with some recovery team being led to a discovery in the artic, one that it appears they have been searching for. Cut back to Norway, 1942, and we have Johann Schmidt (Hugo Weaving) launching a German excursion into the country to look for a special artifact (the cosmic cube), one that has the “power of the Gods”. See, this Johann Schmidt is a wee bit off his rocker. Where Hitler uses the supernatural to keep his troops in line, Schmidt believes in the supernatural and is seeking to harness its powers. Apparently the German high command didn’t want him going into Norway, so a few of them come to his base of operations to inform him that his time is up playing around with blue lights. Not one to take no for an answer or to be denied the power he thinks his rightfully his, Johann promptly vaporizes them with the power of the cosmic cube. No mess, no fuss. Johann has decided to go his separate ways from Hitler and he and his men (now named Hydra) have plans to pretty much burn everything down. 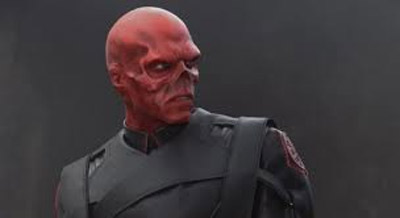 Botox was taken to the extreme by the Nazi High Command

So why does Johann think he, and not mortal men, can handle the power of the Gods? Turns out he was working with a scientist (Dr. Erskine, played by Stanley Tucci) who developed a serum to turn ordinary men into super soldiers. The serum was not complete but that didn’t stop Johann from taking the serum and injecting himself with it. Alas, there were some slight effects, namely inflammation of the head. He is now the Red Skull. As we find out later, the effects of the serum amplify the qualities one possesses all ready, so a madman craving power will not be turning into someone who will help the elderly cross the street. This leads us to Steven Rogers.

Steven (Chris Evans) is a kid out of Brooklyn. He’s got no family, no physical skills, and numerous health problems, all of which keeps him from enlisting into the army, something he’s desperate to do. He’s not afraid to stand up to people, even when it means getting his ass kicked again. While Steve keeps getting denied, his best friend Bucky Barnes (Sebastian Stan) is shipping out to England to be with the 107th, a unit Steve’s own dad was in before getting doused with mustard gas (so we are informed by Steve). This leads Steven to try yet one more time to enlist, which Bucky doesn’t think is a good idea since he keeps using aliases. This conversation doesn’t go unnoticed, as it just so happens Dr. Erskine watches this unfold. As luck would have it for Steve, he is chosen to participate in a special program looking for a soldier.

The safety word is MELON, Steve, don't forget it.

The training is overseen by Colonel Phillips (Tommy Lee Jones) and Peggy Carter (Hayley Atwell). Colonel Phillips thinks Steve is a waste of time and would rather go with another recruit for the program. Peggy sees something in Steve, as does Dr. Erskine, that would make him the ideal candidate. While sucking something fierce with the physical aspect of the training, Steve excels using his head and his heart. Steve is of course picked to be part of the program (scoring high marks in the long program, triple axel double flip), and injected with the super soldier serum. And we are off and running!

Well, not quite. They decide he would serve the nation best by performing in front of audiences across the country asking people to buy bonds to support the war. It is quite successful, but ultimately very unrewarding for Steven. Seems he wants to be fighting in Europe instead of shagging all the dancers. There’s a lot of them too. Anyway, he ends up in Italy performing in front of the troops and learns that a large contingent of the 107th was captured by the Red Skull. Good ‘ol Captain America decides to go behind enemy lines and free the 107th. After performing this little feat, he finally gets his wish and becomes part of a team to go after the Red Skull and Hydra. Montage time, montage time! 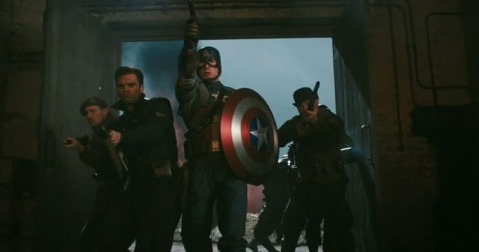 After destroying all of Hydra’s bases, it’s time for the final showdown at their moon base. Sorry, their main base, where the Red Skull has grand designs of blowing up a bunch of cities in the U.S. Final battle between Cap and the Red Skull, Red Skull gets zapped by the cosmic cube (which burns its way through the plane they are on board), and Cap dumps the plane into the ocean so that none of the bombs go off. He gets turned into a frozen entrée until he’s recovered by S.H.I.E.L.D. in present day. Steve meets Nick Fury and handles his frozen time of 70 years extremely well. And now we can get on to that Avengers movie, right everyone? Right?

And herein lies the problem of almost all the recent Marvel movies, the inevitable lead-in for the Avengers movie. Now, I think this movie has some good parts and I like that they decided to have it take place during WWII. That is part of its weakness as well, since by having it take place in the 40’s, you are showing yet again another origin story. I would really like to have the first movie pick up with our superhero already being one, and slowly peel the layers of their origin. And truthfully, I don’t care about his origin or where he came from. It’s not interesting. I wanted to see Cap and the Howlers in action against Nazis, Hydra, whoever. As a traditional origin story goes, it’s not bad but I’ve seen better (Daredevil).

But that really is because of the strong work put in by Stanley Tucci and Tommy Lee Jones. They bring some life to their characters and provide some needed humor. Hayley Atwell doesn’t really register with me one way or another. I’m sure if they have done two movies of Cap during WWII, we could have explored their relationship further as opposed to shortchanging it due to the Avengers movie. Here, she’s supposed to be some tough chick but really does nothing that matters in the movie. Sure, she gets Howard Stark (yeah, he’s in here) to fly the plane that brings Cap behind enemy lines, but otherwise she’s relegated to saying she had “faith” in Cap. The Howlers group was also glossed over too quickly, and I think further adventures with them and Cap warranted another movie like I mentioned. Captain America himself, Chris Evans, was pretty average for me. I like Chris Evans, but here with Mr. no-personality, he just comes across as blah. Whether it’s the character or the writing or just his performance, it’s a pretty bland superhero. Same can be said for Hugo Weaving, who does nothing for me as the Red Skull.

I also think a weakness of the movie is the death of Bucky. I remember from the comics that his death haunted Cap for pretty much forever. It made Cap never want to really take on sidekicks for fear of watching them die as well, though didn’t he have the Falcon as a partner for a bit? In any case, I think that we weren’t given enough time with Bucky and Cap together, to see their relationship, and the impact of his death was diluted. By that I mean it happened and Cap tried to get drunk (he can’t, cells regenerating too quickly thanks to the serum…that sort of blows) and that was sort of it. It’s like something is missing here, shouldn’t it be weighing on Cap’s conscience? He felt directly responsible for it, at least that’s how I remembered it in the comics. Perhaps I’m making too much of this.

Overall I do like the ‘feel’ of the movie and think it does have its moments, but the tie-in with the Avengers does take away from what could easily have been two movies. I’ll give it a 2 out of 4 USO dancing girls.