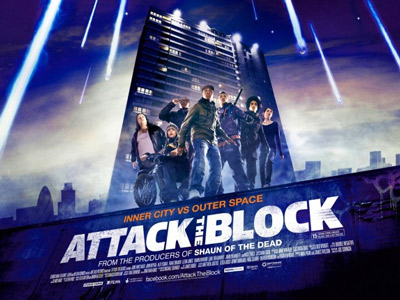 I’ve liked Joe Cornish for a long time, as I remember Adam and Joe in the 90’s (if YouTube has some of the toy reconstructions of films, then I seriously suggest that you watch them. The Trainspotting one in particular is inspired) and he seems like a likable enough film geek in his own right. So, following in the footsteps of Simon Pegg, Edgar Wright (who produced Attack the Block) it feels fitting that he’s finally released a genre film of his own. That film was last summer’s Attack the Block, a science fiction Alien v feral Hoodie scum film that seems to be either rapturously adored or strongly disliked.

Attack the Block was a film that I was frankly too lazy to see in the cinema. Aint it Cool News was wanking itself into a frenzy over it, and I simply couldn’t be bothered to fork over my hard-earned. Funded by the lottery, Attack the Block has a reasonable budget for a British film, and we don’t really tend to make Science Fiction, so I really should have got off my arse to see it.

The film opens with a group of feral chav vermin mugging a nurse (Jodie Whittaker). The leader, Moses (John Boyega) pulls a knife on her, before a meteorite hitting a car allows her to escape. On investigation, the meteorite turns out to have an angry alien inside, which the hoodie scum kill. Next thing we know, they’ve gone back to their grim housing estate (The Block) and up to local dealer Ron’s (Nick Frost) place to store the alien. Moses is recruited by Hi Hatz (Jumayn Hunter) as a dealer, and he agrees to allow them to leave the corpse in the weed room. Next thing we know, there’s a whole shit load of aliens landing and, er, attacking the block. Can our heroes survive.

This is quite a good film, but it’s been horrendously overrated. While I did have fun with it, there’s no way that it merits the vigorous testicular massage that it receives. There are several serious problems here, that I’ll come to in a minute, one of which was nearly bad enough to sink the film altogether. However, before I go down the route of needlessly beating shit out of a film, I’m just going to highlight the plus points, and I’m going to start with the acting.

Our little group of chavs are all played by actors that I’ve never heard of. While I suspect that Boyega was too old to play Moses (the character is meant to be 15), the film acknowledges this by having Sam say that she thought he was older. Nevertheless, Boyega has a steely presence and although not blessed with a huge range of expressions, his turn here works well in the context of the part. Frost is his usual likable loser self, and Whittaker is OK, if a bit shrill, as Sam. The rest of the hoodie brigade are, on the other hand, good most notably Alex Esmail as Pest.

Secondly, the effects, considering the budget, are fantastic. The Aliens have a real presence, and the luminous teeth thing is a nice way to get maximum bang for your buck. For the most part, these monsters feel real and also threatening, and you can see why our hoodie brigade has serious problems disposing of them. Furthermore, if I didn’t know that this was Cornish’s first film, then I wouldn’t believe it as he handles the effects themselves as well as the action sequences that make up the film’s second half with no little aplomb.

Talking about Cornish, he keeps the film on a short leash. This may possibly be down to budgetary concerns, but Attack the Block cracks along at a rare old pace. As a result, even when scenes aren’t particularly working, it doesn’t matter because they don’t hang around enough to become annoying. This is a remarkably assured first outing for a director.

Then there’s the second half of the film itself. Now, when I come to my complaints, they’re almost all about the first half, however, once our heroes make it back into the block the film comes into its own. There’s a palpable sense of danger to each confrontation, and I really haven’t seen anything as exciting/ uplifting in a Sci-fi as Moses sprint through the sitting room, which Cornish makes absolutely brilliant. The second half of Attack the Block is a genuine edge-of-seat thriller, particularly once the chavs start dropping, and even with the odd comedy moment it is still an absolute riot.

However, there’s the first half to get over, which, frankly, doesn’t work at all. I know what they were aiming at here- Moses eventually has to face responsibility and, frankly, stop being such a little cunt. However, when you open the film with 6 guys mugging a lone woman you automatically sacrifice any and all sympathy for the heroes. We want to root for them- they’re our representatives against the alien invaders, we should not be thinking, at any point, “good, fucking die chav scum”. I struggled for a long time with Attack the Block solely because of this, and it is a testament to how good the second half of the film is that I was eventually able to overcome it.

On a base level, this is a problem with the script, and it isn’t the only one. Cornish wrote it, so he is fundamentally to blame but there are a lot of severely clunky moments and logical inconsistencies. For example, Pest’s leg gets severely chewed by one of the monsters and yet, using only a pillow, he’s able to run like he’s auditioning for London 2012. Furthermore, the film remembers this every now and again, so he randomly starts limping when required. Secondly, fuck you with your social commentary bollocks. The sequence in Moses’ flat, showing just how fucking hard he has it, can kiss my arse. There’s no fucking need for this, and it’s the worst bleeding heart liberalism in a film for a long time. Look, at the end of the day, nobody made him go out and mug people, so don’t try a late sympathy grab for a fundamentally unlikable character based on this. What’s even more annoying is that by this stage he’s earned our sympathy, so it’s not just obnoxious but also unnecessary. Then there’s the upper class white stoner kid. He should not be in the film, because he only exists for two reasons: 1) as shit comic relief, which is pointless when Nick Frost is there, and 2) as exposition man to pull a shitty and lazily foreshadowed idea out of his arse to explain the aliens. He’s an atrociously written character and a horribly misguided idea.

Overall, despite these serious problems, this is quite a good film, and I did at the end of the day have fun with it. I’m not going to waffle on forever about Attack the Block because it is neither good enough or bad enough to merit it. However, what I am going to say is that if you get a few beers in then you’ll have fun, because it is a fast paced, enjoyable and exciting little monster film. And you can do far worse than that.

Next up is Colin, which is (allegedly) the cheapest film in history costing all of £10. I don’t believe this for a second, by the way.