Is there a more sorry genre out there than the Women in Prison films? Exploitation cinema as a rule is dirty, seedy, nasty stuff, but these exist solely to show various acts of sadism inflicted on unlikely female convicts who exist to wander round in the buff and commit various sapphic acts for the pleasure of the hooting gibbons that comprise the audience. Even in a genre as sorry as this one, and let’s face it aside from Reform School Girls, which is a spoof anyhow, they’re all tacky garbage, this 1980 slice of grindhouse schlock may possibly be the most obnoxious one out there. So, I was clearly compelled to watch it, and, this is something I never thought I’d say, Bare Behind Bars (A Prisão) eventually managed to make even lesbianism boring. How could such a thing happen?

Brazilian filth merchant Oswaldo De Oliveira was clearly in some sort of weird competition with Spanish filth merchant Jess Franco or Italian pervert Joe D’Amato to see who could produce the sleaziest and most bad natured film. While Franco gave it a good stab, even filming his own wife blowing people in things like Female Vampire, I reckon Oliveira has him beaten hands down with this. I can’t think of anything sleazier that may have crossed my mind, and having just finished watching it I feel an overwhelming need to go and drink myself into a coma to induce a state of amnesia. But not before I shower in bleach and scrub my brain with steel wool. Honestly, I feel like I’m typing with a two-inch thick layer of grime sitting in front of my eyes. 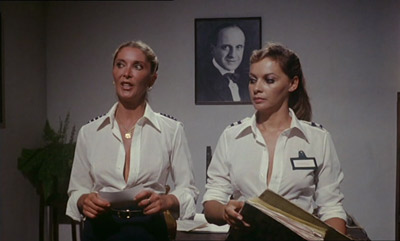 Welcome to Brazil, and more importantly the Brazilian penal (hehehehehe “penal”) system. We’re privileged here to be given an insight into the inner workings of one of its most severe female institutions. Run with an iron dildo by Sylvia (Maria Stella Splendore), a lesbian without access to a lonely hearts column, this notorious gaol houses only hot women with dykish tendencies. In between making them go without showers or exercise (this is frankly a good thing, because when they do go out to the yard it’s like playtime at special school. Well, until they start with the nude calisthenics) she molests the hotter inmates, and then sells them as sex-slaves to other lonely Brazilian lesbos. The guards are run by Cynthia (Neide Ribeiro), who thinks the warden may be going a bit far, and in between bouts of torture they basically shag anything with a pulse- inmates, delivery men, each other, whatever. The various inmates don’t matter in the slightest aside from three: #241 (Marliane Gomes), #341 (Danielle Ferrite) amd #578 (Sonia Regina). Now, these three are important to what passes for the storyline, which I’ll go into in a second, but I just want it noting in advance that underwear is clearly not allowed for anyone that crosses the prison gates- guards, inmates or even the warden.

The film opens with the inmates playing handball in the yard, something not dissimilar to a group of squealing retards fighting over a chew toy, while the riding crop wielding guards stand by the wall watching. Eventually someone shanks #170, which forces the guards to break out a puny water cannon (it has about the pressure of your average garden hose). This is not at all an excuse for a wet clothing fest or heaven forbid that you should think that those escaping tits in this scene were done in purpose. It’s an accident, goddamnit. Actually, this scene is the first of many, many unintentional laughs in the film as the guards accidentally hose down two of their own who are retrieving the body. The warden clamps down by having them randomly tortured (we don’t really see it, to be honest, and it seems to involve a lukewarm shower, a riding crop and a table, although we are informed that the prisoners die during it. Can’t see how, possibly of boredom), banning exercise and basic hygiene and having the nurse (more on this genius in a second) perform a series of cavity searches on the inmates to find weaponry. It comes as no surprise to discover that #241 has a straight razor. Concealed in her anus. Which we get to see removed. Thanks for that, Oliveira.

Brazilian Watermelon was renowned for inducing an orgasmic plateau in middle aged woman. Of course what you can't actually see here is that she's rubbing her naked arse on #241's naked arse. Which may have rather more to do with it than the watermelon. Or it could be the ether. Oh, fuck it, does it matter?

The inmates were pleased when the flag of Brazil made it to their cell. This is, incidentally, exactly what it looks like.

Right, where was I? Oh, yes, #578 has convinced the warden that they need to have a (wait for it) full Catholic Mass to celebrate Carnival, while #241 has managed to convince the nurse to show them the way out, get her a gun, and supply her with her straight razor. The Mass comes, and our intrepid anti-heroines escape. In a frankly bizarre sideplot, we follow “Betty” who has been sold to a lonely dyke and her clam jousting adventures on a desert island.

Once out, the Warden is in deep trouble. She’ s fired and Cynthia takes over (who despite a rigorous determination to stay clothed, does get naked just before the escape). Nurse Barbara is hilariously exonerated (despite being more guilty than anyone else) but prohibited from ever practicing nursing again. Which is disastrous for her, because that’s her ether supply dried up, however, she’s only concerned about her hat. Our three girls, on the other hand, forsake any sympathy at all by going on a murderous rampage involving the rape of a 12 year old boy, 2 severed penises, and multiple acts of hard-core sex. 2 of them are caught by the extremely dodgy looking cops, and the other is murdered. The fucking end. 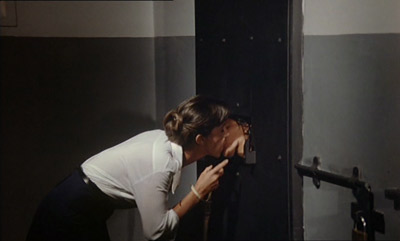 The answer is "Nun" of the above.

That isn’t to say that I wanted to see the cock shots towards the end, because, well, I didn’t, but I did want the three escapees to maybe do something more interesting than fuck people. This, incidentally, is the other strength of the film. Most Women In Prison films shy away from what the heroines actually did to get lengthy terms in the slammer, but here Oliviera has no qualms about showing his heroines to be sociopathic murderesses to a woman. I just wish he’d found another way of doing it that wasn’t raping a kid.

"I told you not to leave the toilet seat up"