Buddy movies are the comic book movies of the 80’s. When Walter Hill’s ’48 Hours’ proved a surprise hit in 1982, it spawned countless variations on the theme. The buddy movies of the 80’s are nearly always based around cops from different walks of life who become partners (‘Lethal Weapon’), or cops and criminals thrown together (‘Midnight Run’, yes technically he’s a bounty hunter, but that movie is awesome and I wanted to mention it!). But the formula dates back further. The earliest successful buddy movie (that I can think of) is Neil Simon’s ‘The Odd Couple’. It’s an easy formula, because all you need to do is put two completely different personalities together, have them clash, then find a common ground (in the case of the buddy cop movie, it’s always the villain) and as they work together towards their goal, they become friends. 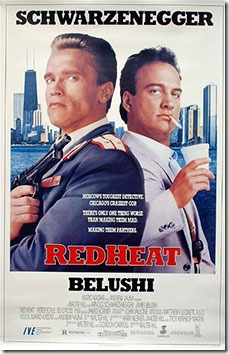 By the late 80’s the formula was growing tired. There’s only so many variations on the same plot before it wears thin. But Arnie still hadn’t had a crack at it, and with his quickly developing comedic talents, it would seem like a natural choice. And with Walter Hill, the director who kick-started the genre, it looked like ‘Red Heat’ could be a winner.

In Moscow, serious, no-nonsense, straight as an arrow Captain Ivan Danko (Arnie) is leading the task force to capture drug smuggler Viktor Rostavili (Ed O’Ross). It goes horribly wrong, Danko’s partner is killed and Viktor escapes and flees to Chicago. When he’s arrested on a minor charge, Danko travels to America to bring him home. Assigned to Danko is the foul mouthed, portly, anti-authority weisenheimer Detective Art Ridzic (James Belushi). Viktor escapes, and continues his plan to smuggle drugs into Russia. It’s up to the odd couple of Danko and Ridzic to stop him.

‘Red Heat’ is most notable for being the first Hollywood film allowed to film in the Red Square. Apparently the Russkies were won over by the screenplays portrayal of a monosyllabic, asexual, brutal, murdering gigantor as the hero of the film. Well, that and it quite clearly mentions on numerous occasions that the villain is Georgian. Definitely not from Mother Russia. Georgian, okay? Got it. He’s Georgian! Not that anyone outside of Russia really cares. Georgian? Russian? Whatever! Same difference. But not to worry. Georgia got their own propaganda action film 20 years later, with Renny Harlin’s ‘5 Days of War’. And the sadistic, evil, murdering, hateful villain of ‘Red Heat’ is a pure of heart George Bailey type by comparison.

Okay, I’ve got that out of my system, and that’s good because other than the mild stink of questionable political motivations, ‘Red Heat’ is a fairly enjoyable film. The strength of the film is the two leads. It might be surprising, but I credit Arnie with one of his best performances here. In a time when his comedic skills were just being recognised, the film saddles him as the robotic, humourless straight man. He overcomes this with some terrific, subtle reaction shots and the very well handled gradual thawing of his rigid persona. It takes some time, but there’s a scene in the second half of the film, where he and Belushi are in a coffee shop, having just been thrown off the case, that nicely develops the friendship.

I’ve always enjoyed James Belushi’s performances. He has a self-aware screen presence and he’s very entertaining as the wisecracking screw-up character. Knowingly mocking himself, as the out of shape motor mouth, he is especially funny when he’s seemingly standing on tiptoes to get in Arnie’s face. He brings great energy and levity to what is otherwise a fairly somber, slightly mean spirited film. Rounding out the supporting cast are the stock standard police chief (Peter Boyle), a rival cop who has it in for Ridzic (Laurence Fishburne), and the superfluous female (Gina Gershon). None of whom are very interesting characters.

As I said, ‘Red Heat’ is a bit too mean spirited for my liking. It seems to be a theme with Walter Hill, because it’s the biggest weakness of ’48 Hours’ for me. Here, Viktor unnecessarily murders numerous bystanders, and the killings themselves feel gratuitous. We get the idea, he’s a bad guy. We don’t need to see him repeatedly pummel some guys head into a counter, or shoot a train driver. Otherwise, Hill keeps the pace moving and allows each scene a few comedic flourishes from Belushi.

‘Red Heat’ is a hit and miss entry into Arnie’s filmography, but overall it’s an enjoyable, if unremarkable affair. The two leads make the film a lot better than it has any right to be, I just wish they were featured in a better film. I’m still unsure why the opening scene in a spa where a near naked Arnie beats the crap out of a couple of other near naked tough guys (one of whom is Sven-Ole Thorsen of course) is necessary. It’s utterly pointless, and the only reason I can think of for it’s inclusion is that for the rest of the film Arnie wears big, ill-fitting suits and this is their chance to show off his muscles. And in a film this agenda-filled, that’s probably likely.