I was complaining recently about the misuse of the awesomeness of time travel when I reviewed the film ‘The Philadelphia Experiment’ for the 1984 entry in my birthday series. Of that film I said “The film drags along in a seemingly never ending series of tedious scenes that fail to develop anything interesting and then ends in a fury of special effects.” But by comparison with ‘Primer’ that film was a veritable hive of activity. And that isn’t a criticism of ‘Primer’ at all. It’s actually a testament to the fact that if you intelligently craft a film of challenging complexity, a film that fails to build an interesting story, and instead relies on a far fetched plot and whizz bang special effects, will look pretty silly in comparison. I’ve tried to keep the details of ‘Primer’ under wraps, so for those that haven’t seen it, hopefully there’s no dramatic spoilers lying in wait. And if there is, you can rest assured that they won’t help you understand the film any better.

Aaron (Shane Carruth) and Abe (David Sullivan) are involved in a tech company start up with two other friends. Working out of their garage, they build a machine that does… something. They’re not sure exactly what. It definitely doesn’t do what they intended it to do. But they’re confident it does something groundbreaking, and all they need is to figure out what that is. Working on a clue stemming from a quicker than normal build up on a unique type of fungi, they decide that the machine is a time travel device of sorts. Their first thought is, as anyone’s would be, to make themselves rich. So with careful attention to causality, they begin to loop back on themselves, using the machine to go back to a specific time in the very recent past and play the stock market. The unknown effects of the machine, and the personal agenda’s of Abe and Aaron begin to cause complications that no amount of careful planning could prevent, and their lives begin to spiral out of control.

Boy that was a difficult synopsis to write without just repeating the plot verbatim. ‘Primer’ is an incredibly complex film, not only in plot and structure, but in dialogue and character. Each scene seems to drop us into the middle of a conversation. But one of those conversations between tech minded guys that’s all shoptalk. Very little is given to the audience, and we have to try to follow. And follow we do, even if it’s in the vaguest terms. We know they’re a struggling business, and we know they’ve discovered something. But since they don’t even know what it is, how can we? There is a great feeling once Abe and Aaron discover the possible implications of the fungi build up. It’s effective because we are on the characters journey, and discovering the invention as they do. And we are just as mystified as them along the way.

‘Primer’ is a one man tour de force. Shane Carruth wrote, directed, produced, shot, edited, scored and starred in the film. That the film turned out anything but a disaster is nothing short of amazing. He’s created a film that is purposefully challenging, with no attempt at standard exposition. The result of which is a film you won’t fully understand until you watch it again (probably more than once) and then think about or discuss at length. This is it’s greatest strength and weakness. It’s a weakness because it’s far too complex for mass consumption, making the film far too difficult for a vast majority of standard cinema goers. It’s simply too difficult and your average viewer won’t watch it twice. It’s a film for a specific audience, and the weakness refers to it’s non-commercial nature. This is not a criticism, just an observation. 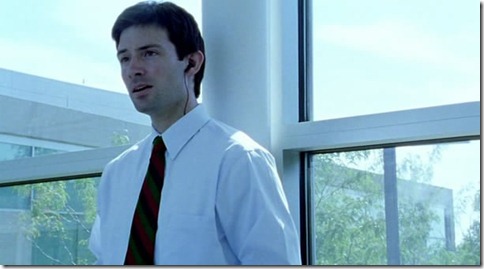 But for me, it seems tailor made. I love watching time travel taken seriously, with care and attention to detail. The gradual discovery of the true nature of the machine, the detailed preparation when Abe (who is more concerned than Aaron with taking care with causality) first takes a ‘trip’, and the specific way they play the stock market, so as to not draw attention to themselves. It’s incredibly satisfying for someone who’s enjoys a time-travel story.

‘Primer’ succeeds for nearly an hour of it’s brief 77 minute running time, until the last section, where the characters begin to loop back on themselves, and scenes are repeated with variations in dialogue and intent. The denouement feels too truncated and structurally unsatisfying. Once Abe and Aaron have realised both the danger and potential of the time machine, the film feels rushed. With the two friends both attempting to take control of the machine by going further back in time, the film becomes too confusingly abstract for it’s own good. The film doesn’t live in the moment, and only becomes clearer to you later, once you’ve deconstructed it for yourself.

‘Primer’ is one of those “almost” films that achieve so much and teeter on the edge of, but never topple over into, greatness. It’s a remarkable achievement considering the incredibly small budget, the actors are very believable and Shane Carruth pretty much did everything. It’s one of the few time travel films that take the subject seriously, and specifically address cause and effect instead of merely using it for a plot point. Carruth’s next film is science fiction, called ‘A Topiary’, and is in some sort of pre-production, awaiting financing, who knows when stage, so I will look forward to seeing what he can do on with a larger budget next time. Whenever that comes about.