The Birthday Series: The Philadelphia Experiment (1984) 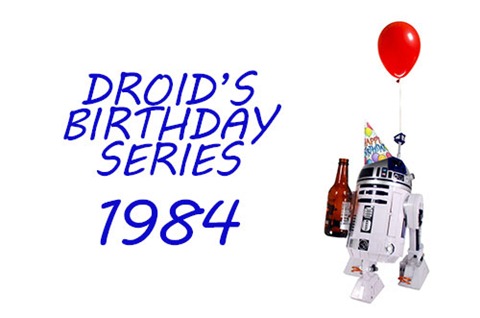 There’s nothing worse than trying to write a review about a dull, average, boring film. A bad film gives you plenty of topics to talk about, and a review can often be therapeutic as it allows you to clarify in your own mind why you didn’t like it. Good films are easy as well, but tend to be less complex than bad reviews. The reasons for its success are usually simpler. The film is fun, entertaining, emotionally satisfying, challenging or whatever other base reason gives you the jumping off point to create a review that encapsulates your positive attitude towards the film. 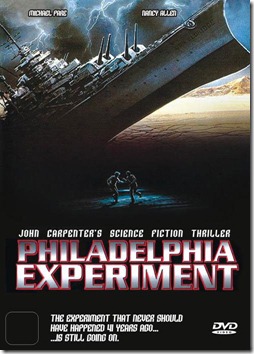 Why am I blathering on about this you ask? Well, ‘The Philadelphia Experiment’ isn’t a particularly bad film. But it’s definitely not even close to being a good one. It’s the worst kind, because it falls smack bang in the middle. It’s one of the most stunningly average films I’ve seen. It’s an astonishing accomplishment that a film based around time travel could be the least interesting film on my birthday list. I’m writing this review from memory, taking cues from Wikipedia, because I watched the film over a year ago and will go to great lengths to avoid having to sit through it again. 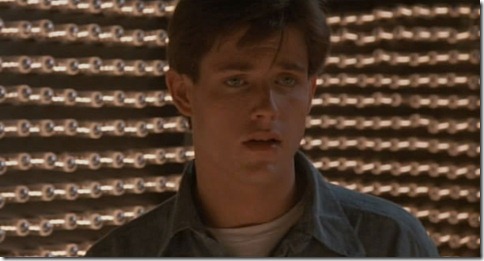 It’s Philadelphia in 1943, and two US Navy sailors David (Michael Paré) and Jim (Bobby Di Cicco) are stationed to the USS Eldridge. When an experiment to make the ship invisible to radar goes wrong, David and Jim are sucked through a time vortex, landing in Nevada in 1984. They encounter hostility from the inbred locals who take issue with the fact that Jim shoots lightening bolts at their precious space invaders game and escape by carjacking Allison (Nancy Allen). They take Jim to the hospital, where he promptly vanishes into thin air. Allison hangs around, despite numerous opportunities to escape David, who’s a mumbling weirdo. They get chased by government goons for a bit, and then end up at a high tech laboratory where David must venture into the unknown, with nothing short of the fate of the universe hanging in the balance. Or something like that. Even Wikipedia is useless when it comes to this movie.

Bloody hell I was bored by this movie. It’s a fairly intriguing set up, and could have made for a suspenseful entertainment. Credited to four writers, the story could’ve gone anywhere. It’s based on the alleged naval experiment carried out in 1943 (much in the same way that ‘Battle: Los Angeles’ was inspired by the Battle of Los Angeles in 1942.), which automatically carries interest. But once the film is underway, with David and Jim in 1984, the film goes nowhere, with only a few nominal attempts to exploit the fish out of water aspect (they comment on Coke cans). The film drags along in a seemingly never ending series of tedious scenes that fail to develop anything interesting and then ends in a fury of special effects. 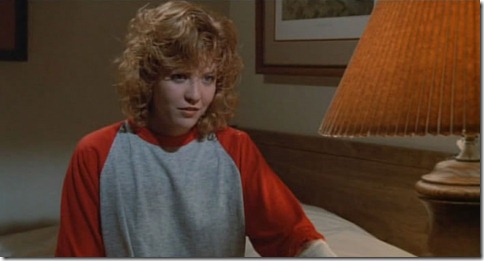 I really hate films like ‘The Philadelphia Experiment’. Not because it’s hateful. It’s not. It’s because it takes a concept with huge potential, what would seem to be a reasonable budget, and does absolutely bugger all with it. It’s such a waste of time. Director Stewart Raffill doesn’t help proceedings with his lazy pacing. There is absolutely no effort made to build a scene, or to give the film momentum. Each scene just grinds into the next, and when they kidnap Karen Allen, you have to wade through the dire “romantic” subplot that the film dutifully plays out. The romance storyline is so lifeless it makes the rotten corpse of HG Wells look like Robin Williams in his coke days.

And when the film finally arrives at a scene that could be considered interesting, such as when David and Allison go to the home of Jim, who apparently vanished safely back to 1943 and trotted home like nothing happened. Jim’s now an old man, and I felt as though a good, solid scene, with a confrontation between the old Jim and the young David, was on the cards. But the movie didn’t seem to know what to do and the scene fizzles. Jim refuses to see them, and has his wife send them away. That’s it. Nada mas. 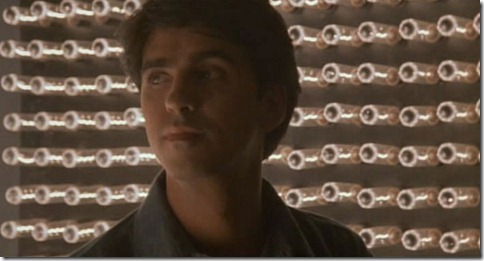 The ending is a fury of special effects, as David ventures back into the time vortex to repair something or other on the ship. I’ve forgotten why. The forgetting began approximately 32 seconds after I pressed stop, lasting 3.8 seconds in total. A new record. So the ship is still stuck in the vortex and is causing Extinction Level Rain Clouds on the horizon in Nevada. I mean these are really nasty looking clouds. Batten down the hatches, little Billy and Mary-Jo! A storms a comin’! I guess David fixes it and ends up back in 1943 in good ol’ Phili, home of the cheese steak, a busted bell and The Fresh Prince. Now, I’ve been to Philadelphia, and have to say, the cheese steak was a disappointment, the busted bell is exactly what it sounds like, and I did not see any Prince’s, Fresh or otherwise. I did run the Art Museum steps like Rocky of course. That’s about the best thing I can think of that I did in Philadelphia. Can’t say I recommend it.

Hang on. I’ve digressed here. What was I talking about? Right. A boring, crappy movie. Well, the actors don’t bring anything of interest to the film. I’m befuddled by the appeal of Michael Paré. He clearly can’t act. At least, not in anything I’ve seen him in. Here he mumbles and moans and is generally unlikeable. Bobby Di Ciccio is a little bit more interesting, purely because he doesn’t appear comatose, but his screen time is limited. Nancy Allen is given nothing to work with, and isn’t a good enough actress to make something from nothing. The highlight of the film is Stephen Tobolowsky, because he’s a naturally offbeat actor. And I was intrigued by the fact that he hasn’t changed in thirty years, apart from losing the unwinable battle against hair loss. Seriously, why do men opt for the comb over? Who do they think they’re fooling? I’m lucky enough to have a full head of hair, but if I were a nude nut, I’d like to think I wouldn’t delude myself by sweeping my sideburns over my head. Have I digressed again? It’s that sort of movie. 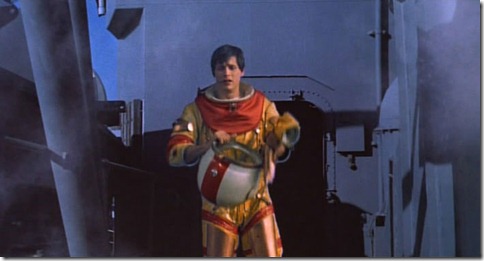 ‘The Philadelphia Experiment’ is a total waste of time. It’s a waste of the crews time, the actors time, the viewers time, and most importantly, it’s a waste of my time. In my research, which I faithfully conducted for the purposes of this review, I discovered the film had, for the time, the quickest cinema to VHS turnaround ever. It was released at the cinema in August and was on VHS by October. Which is astounding since films in those days used to take at least six months to get to VHS. I also discovered that it was once offered to John Carpenter, but he counter-offered ‘Escape from New York’ (and remains listed as Executive Producer). I’m intrigued to know how much better a Carpenter version would be, but I’m very pleased that he did ‘Escape from New York’ instead. Because this film stinks and that film is awesome.

In lieu of zero changs, this film receives my first use of the Orangutan of Despair, because it’s despairing to witness such flagrant misuse of the awesomeness of time travel. 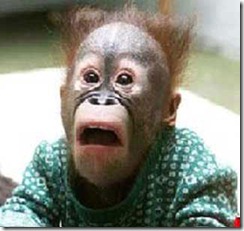 NOTE: I only discovered this tonight when I was looking for the films poster, but look at that dvd cover! Shamelessly pimping John Carpenters name on something he had very little to do with. 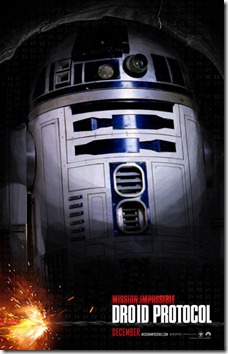 35 responses to “The Birthday Series: The Philadelphia Experiment (1984)”