I don’t tend to go to too many film festivals in the UK. The last one I attended was the utterly disastrous  London Sci-Fi festival last year which gave me the distinct pleasure of seeing the disappointment of the year in Splice (although it did introduce us to lovable tub of lard Murphy). This year, me and Droid got our shit together and went down to Frightfest in Leicester Square for Ti West’s new effort The Innkeepers- which came complete with Q&A session afterwards.

Before I start the review properly, a couple of words about festivals in general and Frightfest 2011 in particular. Is there honestly a more depressing group of fat nerd weirdos in the whole of London than the lot that attended Frightfest? Honestly, it was like a Harry Knowles lookalike competition at times, and watching them stand around gawking at the “vintage” overpriced horror posters was much like watching a group of overeaters at a free buffet. Not to mention the sheer stupidity of some of them, most notably the woman who asked West to explain the ending afterwards. Seriously, love, does your care worker know you’re out?  Secondly, Why do the people that organise these things have such a frightening lack of knowledge as to the genre their festival is  meant to be representing? Thirdly, in an embarrassing admission, I’ve seen 2 of the 3 grindhouse trailers they put on. Shameful. Finally, and more importantly, if Frightfest is the premiere event for horror in the UK, then the genre is in more trouble than I thought it was. This year’s lineup is, judging from the posters and what little I know about the films, completely overrun with Torture Porn, and if this keeps up then I really do fear for the genre. Against this tide of unpleasant garbage, Ti West stands almost alone making his understated, slow-burn suspense films and usually completely outclasses the more sordid drivel out there.

As already mentioned, this was the UK premiere of The Innkeepers. Basically, this is a Ti West film, so to some extent we know how it has to play out. This time around, the woman in danger is Claire (Sara Paxton), low level employee of the Yankee Peddlar inn. It’s the last weekend and she’s splitting the shift with Luke (Pat Healy). The only residents are a vile mother (Alison Bartlett), her son, and Lee, a washed up actress played by Kelly McGillis. Luke is a wannabe ghost hunter and has built a website around the legend of O’Malley (I may have got this name wrong), a tragic suicide on her wedding night in the hotel. Over three Chapters we get to see the terror unfold leading up to an end that everyone can see coming a mile away.

Anyone that’s seen House of the Devil knows exactly how West is going to play this. The first two chapters are actually extremely hard to watch because almost nothing happens. Claire is essentially on her own in a creepy location, and although she is attempting to contact the dead using a dubious microphone, she’s not really up to a huge amount. West places Paxton front and centre here, and effectively uses her as the focal point for all the supernatural shenanigans that take place. Yet, nothing really does occur, there’s no real pay off to the tension and as a result, the film becomes absolutely nail-biting. This is assured film-making, and allows the more conventional spectral business to have more impact, particularly when one of the principal ghosts isn’t the one we were expecting. 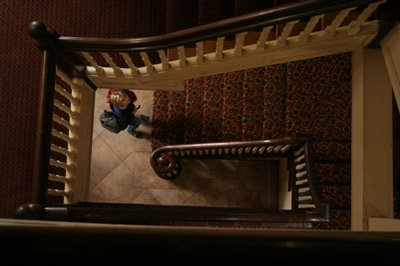 To give West more credit, he really does know where to find interesting female leads for his films. House of the Devil featured a then almost unknown Jocelyn Donahue, and this time round he’s done it again with the casting of Paxton. In the Q & A afterwards he commented on her slightly quirky appearance and presence, and here he allows her to be as unusual as the film can take. As a result of this freedom, she puts in a very raw, committed turn that is streets ahead of the usual scream-queen performance you would expect in a ghost story. She really is very good here. The other support, particularly Healy and McGillis are also good, but this is Paxton’s film. Incidentally, McGillis seems to be having a bit of a career renaissance as an elder actress in independent horror films. How the hell did she manage this?

Furthermore, he’s also got a great eye for a location. The Innkeepers was inspired by the genuinely creepy inn they stayed in during the filming of House of the Devil. West talked engagingly about the feeling of unease they had while staying there. He’s a dab hand at using the location for spooky effect, the house in House of the Devil worked a treat, as did the barn in The Roost, but here he’s really outdone himself. This is a fundamentally unsettling location, and although there was the inevitable comparison with the hotel in The Shining, he does use the Yankee Peddlar to full effect.

Now for the downside, and I’ve already touched on it. This is basically House of the Devil with ghosts. As a direct result it suffers in comparison to that superior film. West clearly has a formula, and by rigidly adhering to it as he does here, The Inkeepers feels very much like a film that you’ve seen before. It’s the very lack of originality that serves as a partial strength eventually undermines it in comparison. Furthermore, the artificial title cards actually make this feeling worse, because they noticeably split the film into sections. Whereas in House of the Devil, the film felt organic, as if the viewer was actually there with Donahue, but here the scene ends and we get another helpful title card. This was, I think, a mistake as they don’t add anything to the film other than as a pointer for dummies to stupid to see where it is likely to head. Thankfully, for his and our sakes, his next film is Science Fiction, so he will have to shrug off the comfort blanket of the formula.

Then there’s the score. One of the cheapest and easiest ways to elicit tension in the audience is through the score. Watch The Sixth Sense, and you’ll notice that at all the “scary” points of the film, it is underscored with a minor key string instrument and usually finishes with a discord of some description. I think there is actually an evolutionary reason why these sounds make us as a species feel on edge. Here, it’s almost unceasing, and manufactures this feeling of unease in scenes that don’t particularly warrant it. The film badly needs a few “jump” scenes (not a lot more) to allow the audience a breather, to let them know that this is a ghost story in the traditional camp fire sense of the word. Yet we don’t get these moments until the action-packed third act, and as such the use of the music eventually begins to lessen in its effect. For example, the scenes in the basement, lack the power of the earlier sequences because we’ve heard the musical accompaniment solidly for an hour previously. Less in this case can indeed be more.

Nevertheless, this is still a good film and one of the best ghost films to come along in a while. It’s strongly acted and assuredly directed and as such it will cause the hair to rise on the back of your neck. Spooky and legitimately quite frightening on occasion, it strikes me that it is a shame that I was just left with the sensation that this is oh-so-close to being brilliant and narrowly misses.

Overall, I do recommend this film, but more as a rental I think. The Innkeepers is a very solid, professional film that ticks almost all of the supernatural suspense boxes. The acting is good, the writing allows the possibility of ambiguity (never a bad feature for a ghost film to have) and the direction is smooth and allows the film to breathe. Although flawed, particularly in comparison with the earlier work, I still rate this as the best ghost film in yonks and give it a well deserved two and a half crap ghosts out of four. So, so close and I suspect that in time it may well become an underrated little movie that everyone forgets.

But what the fuck was the name “Eli Roth” doing in the “Thanks” section of the credits, Mr. West?

Next up is a “gets pissy at review”, and I’m taking a big axe to that ode to hipster douchebaggery Scott Pilgrim.