After a very, very rough couple of decades, Just Pillow Talk looks at the 1990’s, I’d imagine, with a bright-eyed sense of optimism. He’s got a couple of actual good films coming up soon in Silence of the Lambs and Wayne’s World, but before that he’s got to negotiate the potential pitfall that is Revenge, a film I’ve never seen.

This is how he got on:

Can I match my longest streak of movies rated higher than 2 with….two? A tall order to be sure, but one that will easily be matched if I can only get over the Revenge hurdle….

Jay Cochran (Kevin Costner) has just retired from the pansy bed wetting Navy and heads down to Mexico to spend some time with his friend Tiburon Mendez (Anthony Quinn), a mafia type who Jay had once saved during an Alaskan hunting trip. Once there, Jay feasts his eyes on the quite smoking hot wife of Tiburon, Miryea (Madeline Stowe), who has already worn some very sexy clothing. We also learn that Miryea wants children, but that Biron wants nothing of the sort. 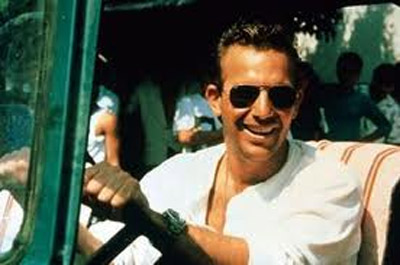 He’s invited to a dinner party by Tiburon with a couple of business associates, who he brings into another room to discuss a few things with, leaving Jay and Miryea alone to converse. There, Jay finds out that it was an arranged marriage, and that Miryea’s father did business with Tiburon. The meeting doesn’t go well for the two ‘associates’, since Tiburon didn’t like how things went down with them and has a bullet put into the head of one of them. Miryea questions her husband, what happened to one of the men since she only saw one of them leave. He of course tells her nothing happened.

Jay and Miryea spend some more time at the beach house Jay is staying at, nothing happens since Jay is able at that point to keep it in his pants. However, at a party she continues to pursue him and they find a place where they can shag without being disturbed and they dance with his wolf. This goes on for a bit, and Jay decides it’s time to bail. But alas, the power of a woman compels him to stay. Miryea calls her sister to tell her to lie to her husband and say she’s staying with her in Miami and that she’s in love with someone. Tiburon has her phone tapped and hears this. He doesn’t confront her, but instead goes to see Jay and tell him to fly the plane for him on his business trip, almost pleading with him to take it. He declines saying he’s got his heart set on going to his cabin and besides, he’s done with flying.

I’d like to take time again to say that Madeline Stowe had a mighty fine ass (her ass is mighty, not that Quinn guy).

So they have a day and night of passion…and then Tiburon shows up with his goons and quite rudely blows away his dog, beats the snot out of Jay and deposits him along a roadside, burns down his cabin, and bring Miryea to a whorehouse after slicing her face open. Jay is picked up by a good Samaritan and brought back to a house where a sort of medicine woman brings him back from the edge.

Along the way, Jay runs into Texan (James Gammon) and Rockstar (Sally Kirkland), each time happening to run across some of the goons who fucked him over. He also, through his acquaintance of the good samaritan, comes into contact with Miguel Ferrer and John Leguizamo who have their own reasons for going after Tiburon. Meanwhile Miryea is all drugged out of her mind in the whorehouse wishing she was dead. 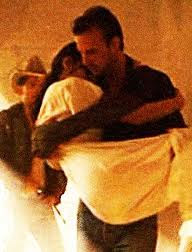 They finally track down Tiburon, but instead of killing him, Jay asks forgiveness for stealing his wife from him. Tiburon tells him where she is now, a convent, and Jay goes to see her where they say their love you’s, and she dies in his arms.

So, much like the Mighty Quinn not being very mighty, Revenge really didn’t have much revenge in it. I had seen this movie before, not too long after it had come out, and remembered it being meh. The same issue I had with it before, I have now, and that is Costner sort of stumbles across the first goon and kills him with a knife. He was just looking to get out of Mexico, but the thought of revenge took over and he killed him. So, as luck would have it yet again, he runs across yet another goon with plans to just waltz in to a bar with a gun and pop him. From this point on, it’s actually Ferrer and Leguizamo who take out the couple other goons, not Costner. It’s them who get the information as to where Tiburon is, not Costner’s character. Much like with Quinn, Cochran doesn’t do enough as the main character for my tastes. The acting is fine, it was just missing some juice, the movie should have been more than what it was, more of a hard revenge tale. Instead, we get a lite version from Tony Scott.

That being said, I still give it 2 attractive Stowes out of 4.

Next up: The winning streak continues big time with Silence of the Lambs, and then Wayne’s World. I must embrace the present and very near future….because what follows….

The Nightmare so far…