“Dicing ones daughter is true happiness!”

Jarv’s Rating: 3 Changs out of 4. Madder than a box of frogs and so much fun it should probably be illegal. Easily the most enjoyable piece of schlocky trash to crawl its way out of the vault in a long, long time.

I have to be absolutely honest up front about this: there was absolutely no way that I was ever going to be able to resist the charms of a film with a title as thoroughly stupid as that, and I also (whisper it quietly) actually like Tokyo Gore Police, so chances are Vampire Girl v Frankenstein Girl was always going to be on to a winner with me. That it also happens to be a gleefully schlocky film, and to have no pretensions higher than B-movie at best is just a happy bonus as far as I am concerned.

This is a crazy film. Jyugon (Takumi Saitô) is a boy in high demand in his high school. Principal’s daughter Keiko (Eri Otoguro) has decided that he’s going to be her girlfriend. However, one valentines day the ancient Japanese tradition of girls giving the boy they love chocolates. Except new girl Monami (Yukie Kawamura) has laced her truffle with blood because she’s really a VAMPIRE!!! and wants to live with Jyugon forever. He’s feeling a bit queasy for a bit, and so goes to see Nurse Midori (a disgracefully sexy Sayaka Kametani), little knowing that she is in league with demented Kanji Tsuda, a mad doctor that dresses up in ridiculous clobber (complete with super-powered electrocution wig)  to experiment on students. It’s all a bit fucked up really. For reasons too ridiculous to go into, Keiko buys the farm and her father puts her back together again. She fights Monami for Jyugon’s love on top of Tokyo Tower, there’s blood splatter aplenty and it’s all fucking hilarious.

Huzzah! LET'S GET READY TO RUMBLE!

Doesn’t sound like much, really, does it? However, the trump card of this film is that despite it being hugely silly, it’s also ridiculous amounts of fun. There are several stand-out sequences in here, but I think my personal favourite is probably the scene where Monami slaughters a passer by and then dances around while the blood erupts from his neck like Old Faithful. This is, and I know this sounds like an exaggeration, fucking hilarious. This is just an example of how downright amusing it is, but I could also talk about the final fight itself, which is a gleefully silly set piece involving all the stupidity that one could possibly wish for, or the utterly insane opening scene. 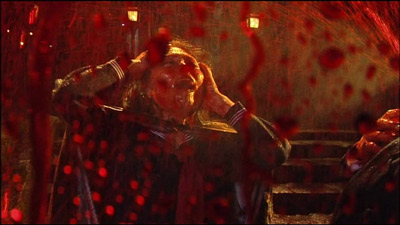 The writing here is actually a lot sharper than it is pretending to be. There are references to horror films galore, including an obvious nod to The Grudge, but I think this is actually having a dig at both Twilight and Let the Right One In. Bear with me on this, but the end of the film is a superb response to that one with Jyugon realising precisely what the future has in store for him now that he’s been groomed. He was, admittedly, unwillingly groomed and only went with Monami because the alternative was that she was going to rip his head off. The Twilight digs are obvious, with the whole icky 900 year old hanging around a school yard to score thing, but as a cheeky dig at two po-faced Vampire films (well, one and the disgrace that is Twilight), this one is an absolute winner.

What the fuck are you wearing?

The acting here is OK. Tsuda is hammier than a pig farm, as are Otoguro and Kametani, with Saitô and Kawamura playing it straight- although Kawamura does have a certain cheeky look about her. The actors, to be fair to them, are all clearly aware of how stupid this film is, and as such do seem to be enjoying themselves. However, did anyone apart from me ever wonder if the nutjob needle fetishist from Audition (Eihi Shiina)ever did anything else? Well, to answer your question, she pops up here as Monami’s mother and has to fight The Sumo From Hell (something that’s automatically funny).

The effects here are OK, some clearly being better than others, and to be honest, seeing as they are only interested in throwing buckets of claret around anyway, fuck it who cares. However, the silly solid blood effects that the vampires use is funny in its own right (I love Monami’s mother on Blood skates, that’s hugely dumb), and the hideously twisted Frankenstein creature is also a very amusing piece of practical makeup. I give a lot of credit where its due for this one.

There’s a reason for that: the prep time for this film was only two weeks. Two Weeks! Bay hasn’t even made up his mind whether he wants nine hookers or ten on call in his trailer in that time. That’s massively impressive and if I hadn’t just found that out then I would never have known. Yoshihiro Nishimura, Naoyuki Tomomatsu, the directors, clearly knew precisely what they had in mind (silly as possible and make as much mess as possible) and just went out and did it. That they included nice little retro touches to the film is just an added bonus. Actually, this reminds me, if there’s one type of film that this feels most like then it’s clearly 1990’s Troma. Vampire Girl v Frankenstein Girl has the same cheeky intelligence and same disrespect for taste that you can see running clearly through films such as Class of Nuke ‘Em High, and, although I know this is sacrilege, I think I may prefer it to Nuke ‘Em.

That isn’t to say that it isn’t flawed. The film only briefly lives up to the superb opening, and could clearly have also done with some nudity. However, when you’re watching a film where an Igor battles a mad doctor using a disembodied ribcage on retractable spinal column, then you’re clearly not looking at high art. Furthermore, as enjoyable as the final dust-up is for a while, it does eventually get repetitive, and there are far too many disgusting scenes with the “Wrist Cutting Club” (hardest bit of the film to watch) and the blatantly racist (although it is meant to be tongue in cheek) Ganguro Girl club (don’t ask).

And they lived happily ever after. Well, for about 100 years before Jyugon turns into dust.

Overall, this is an absolute riot. I happily rate it very highly, and think I may come back to it in the future. I would recommend Vampire Girl v Frankenstein Girl, but I have to add a few words of caution: Do not watch this if you are in any way squeamish, because while it is deliberately over the top, there are still some scenes that are, to put it mildly, stomach turning; and for the love of the Flying Spaghetti Monster make sure you have as much beer to hand as there is gore in the film. It’s much more enjoyable when a bit pissed. Vampire Girl v Frankenstein Girl is much, much better than Tokyo Gore Police, and although it does just fail to consistently live up to the promise of the genius opening, I do still say that if you have the stomach for it, then it is more than worth a look.