Continuing on this never-ending trek through the annals of film released on my Birthday, and it really hasn’t been that hard. I haven’t suffered the misery that Pillows has sat through, but I will put my two worst films up against any film on any other list. Against that, though, I think I’ve probably drawn the most “classic” films- with some of them legitimately ranking in the “best in category” level. I’ve also, and this has surprised me a wee bit, drawn a lot of movies that I remembered very fondly from the time that looking back at them now don’t rate anywhere near as highly. Today’s offering, Mimic, is an early Guillermo Del Toro film, and, well, I’m not really sure how I feel about it.

Mimic (release date 22nd August 1998 in the US) arrived in the UK with very little fanfare. So little, in fact, that I missed it completely. I knew nothing at all about Del Toro, mildly fancied Mira Sorvino, and had been burnt by The Relic (which I’m the only person that doesn’t like) the year before, so wasn’t overly keen on seeing another monster film about big insects. Still, I did rediscover it when I was in my first year at University, and really enjoyed it with a few beers. Looking back on those days, the amount of films that I gave passes to that I really shouldn’t have was quite exceptional.

Mimic is a surprisingly complex plot. Sorvino’s movie scientist Dr. Susan Tyler is recruited to genetically engineer some super cockroaches to deal with New York’s problem infectious roaches. The strain she comes up with, the Judas Breed, will automatically die and is infertile. Cut to three years in the future, and she’s going about her business buying insects off children and generally being all very nice. Unfortunately, the Judas insects have bred and her tinkering with their genetic makeup has accelerated their evolution by thousands of years. Shenanigans ensue, and Susan, Jeremy Northam’s Dr. Peter Mann, Charles S. Dutton’s Leonard, an old codger and an autistic kid are trapped in the underground sewers and subway tracks fighting off millions of the hungry bugs.

There’s a lot to like here. A few scenes reek of genuine tension (Northam rewiring the tube for example), and this is one of the only films I can think of where two kids are killed and it doesn’t feel either mean spirited or gratuitous. The design of the bugs themselves, with the splitting carapace that resembles a human face is well thought out, and the climactic fight is genuinely gripping. There’s far more bad than good here.

The acting is all passable to good. Dutton is excellent, and steals every scene he’s in. Sorvino looks a bit lost, but she’s principally a comic actress, and I happen to think she’s a bit miscast. However, she does work hard against her type and comes up in credit. Northam is excellent, solid all round lead and a charismatic and likeable presence. There isn’t a lot to criticise on the acting front.

There’s also not a lot to criticise on the direction front. Del Toro was still relatively new, and certainly wasn’t at his peak, but there are several really well handled scenes. In particular the sequences with Chuy (autistic boy) playing the spoons to the sound the Judas Breed make are supremely well handled. Del Toro said that he has “a sort of a fetish for insects, clockwork, monsters, dark places, and unborn things,” and that comes through strongly here, with lots of long dark shots of corridors, and the film really does manage to conjure up a sense of claustrophobia.

This is, essentially, a “don’t fuck with mother nature” film. It’s entirely a movie scientist induced catastrophe, and I do believe that it’s one of the better ones. However, I just don’t warm to it at all. Partially, I think it’s the presence of Chuy that gets to me. The characters are in more than enough danger with the bugs, and his late reappearance strikes me as both unnecessary and a cynical attempt to manipulate the audience. While he is vital to the early part of the film, I think any movie bold enough to kill two normal kids should have the stomach to kill Rain Boy.

Secondly, there are several extremely large plot holes where characters spout lines of dialogue that I’m sure were only written to go in the trailer. I’m thinking in particular of Sorvino’s “Sometimes an insect will even mimic its predator” line which is grating and blatantly out of place. For a start, we aren’t the bug’s predator. They have been living separate from us for three years, and nobody even knew they were down there. There is no biological reason for them to consider man to be their predator. Secondly, the scientists get their knickers in a twist about the Bugs escaping from Penn Station and going on a rampage. This, actually, is fine, but they frame it in terms of the insects having a coherent plan, and there’s no indication that they’re intelligent enough to do this. I know these count as quibbles, but I think it’s touches like this that stop me buying into the film altogether. 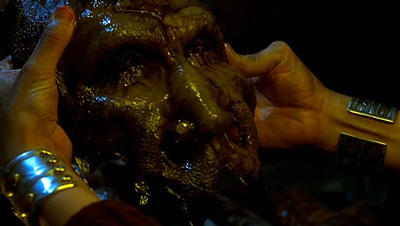 Overall, this is a good film but not a great one. It’s not bad, and passes time quite painlessly, but for some reason I just don’t warm to it. I do sort of recommend it, but I notice that Mimic started life as a half hour segment of an anthology, and I wonder if a lot of the flabbiness in it is as a result of that. Grab a few beers, and the time passes completely without pain, but it isn’t a film that I go nuts for. I give it a completely balanced two and a half Jiminy Crickets out of four.

Next up is one of the finest funny book movies of all time: Wesley Snipes is Blade fighting motherfuckers trying to ice skate uphill.