This list of his isn’t getting any easier. In case you don’t know what the score is here, Droid devised a series where the films reviewed are those closest to the date of birth of the reviewer. Mine and his are relatively easy, but Just Pillow Talk drew what can only be described as a very shitty run. This should be no problem at all for the man who single-handedly climbed Mt Almodovar last year. 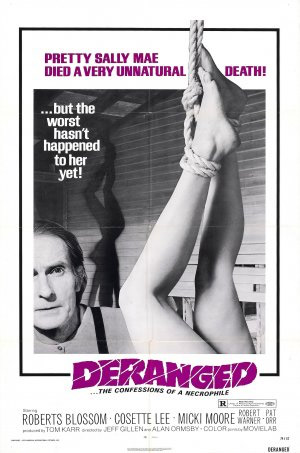 The first words on the screen are: The motion picture you are about to see is absolutely true.  Boo-yah!  So the premise of this movie is about a Wisconsin farmer (Erza Cobbs) who has been tending to his severely ill mother for twelve years.  He ends up becoming a murderer, grave robber, and perhaps necrophile.  How do I know this?  Why there’s some journalist dweeb who randomly shows up in the film giving us a running commentary.  I shit you not.  I’m sure the filmmakers thought this was a great idea… it’s not.

So we join Erza at momma’s side in her room.  Whilst worrying that her son will fall for a “money stealing bitch” when she’s dead, poor old momma starts spitting up blood.  This doesn’t stop Erza from trying to spoonfeed momma some nice soup.  Alas, momma spits up ton of blood and promptly dies.

So some time passes and Erza starts hearing his mom’s voice telling him to bring her home.  “I’m coming momma!”  So once back home snug in her bed, Erza declares “Oh momma, you are in terrible shape.”  What to do…Well, thank goodness for his neighbors, who during dinner one night at their house, indirectly give him the idea of using the remains of the recently deceased.  They mention an obituary of a former schoolteacher of theirs, and the wheels start turning in ‘ol Erza’s head.  He says he could take various body parts.  They think he’s joking, which of course he’s not!  So Erza promptly digs up someone who just died, and brings the body home to fix momma corpse.  He even brings a skull to momma corpse’s room to have someone to talk to.  Such a sweet boy.

The helpful neighbors are at it again, worrying about Erza and think he needs a woman in his life.  They fix him up with a fatty (his mom had issues with fat woman, and this one in particular), whom he goes to see.  Erza ends up telling her that he still talks to his momma, which doesn’t faze fatty since she still converses with her deceased husband.  She comes up with the idea to have a séance to communicate with her husband.  After talking with momma corpse, he tells her that he could get “stuck in all that fat, I’ll bring some protection”. So during the séance, fatty pretends to have her husband talk through her, and tells Erza he is to make his wife a woman again.  Erza, despite being slow on the uptake, grabs some fatty breast.  Unfortunately, momma corpse is in his head again telling him he is committing sin, so he whips out his gun (not that one!) and pops her in the head.

This provides the taste of the live kill for Erza, so he ends up going after an attractive waitress.  This involves her trusting him completely to drive her to a mechanic late at night after her tires are slashed (by Erza of course) and only meeting him once.  She still sees nothing wrong after he drives her to his house to get some spares and is gone for a real, real long time.  What to do, what to do.  Oh, I know!  Go in the house and sort of poke around.  So, what’s behind door #1?  Ding-ding, it’s a room full of corpses!  And Erza, wearing bits of decomposed flesh.  Wait, where are you running off to attractive waitress?  Erza agrees, and knocks her out just so that she can attend Dinner with Corpses.  Yup.  Well, she manages to get herself free, but the doors are locked.  Erza, showing his affection, beats her with a bone. 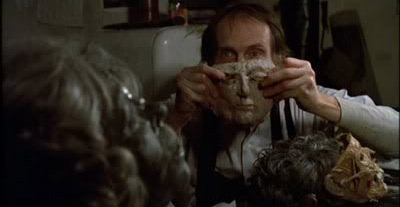 There’s another woman whom Erza goes after and kills, which leads to his eventual capture.  The movie was based upon the true story of Ed Gein, who was credited with killing three women in Wisconsin in the 1950’s.  Erza Cobb was played by Robert Blossoms, who I learned through IMDB had died just two weeks ago.  He had a decent career, appearing in 52 films such as Home Alone.  His performance here entailed mostly making goofy faces has he was befuddled by such questions as “do you know what an obituary is?” or staring at his next victim.  All the performances were okay, considering it was a low budget movie.  Any atmosphere that was created by various scenes would be ruined by the journalist dweeb popping up at various points in the movie to advise the audience of where we are at in the movie.  Or say waitress throwing momma corpse at Erza trying to escape.  That’s not horrifying, that’s funny.

Again, much like with The World’s Greatest Athlete, the short running time of 82 minutes saved it, since it did feel longer than that.    So I give this 1/2 of a dug up skull out of four.  We’re off to a fucking rollicking start.