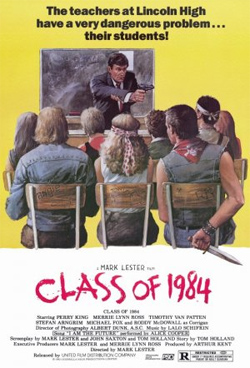 1982 is regarded as being a generally storming year in film. Many a classic movie was released that year, just unfortunately none saw the light of day anywhere near 23rd August. However, in a stroke of massive good fortune this underrated piece of schlocky exploitation was released on 20th August in the USA. This was a result, actually, as the alternatives were almost horrid enough to derail the whole mission, particularly given what I’ve got coming for most of the rest of the 80’s. So, sit back and let me tell you about Lincoln High, a school where the kids are most certainly not alright.

Mark L. Lester has had a funny sort of career. He rode the 80’s in a blaze of violence and gunfire with gems such as Commando, Class of 1999, Firestarter and Showdown in Little Tokyo (I’ve been meaning to review this piece of comic genius for ever)but things just kind of went a bit awry for him, and looking at IMDB, his career has hit the skids in a big way and he’s been reduced to making lesser films such as Pterodactyl. This strikes me as unfair, especially given that when he’s on-song he’s more than capable of making shit explode in a most entertaining fashion. Class of 1984 is his attempt at exploitation cinema, and boy is this one a blast. 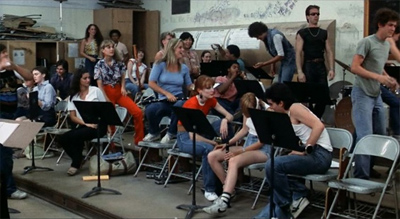 Schlock veteran Perry King plays Andrew Norris. Norris is an idealistic teacher that has mistakenly taken a job at run down Lincoln High. He’s of the “there’s no such thing as a bad kid” school of thought, and is, frankly, completely unprepared for his new position. Lincoln High is effectively run by a highly unconvincing gang of scumbags led by the psychotic Stegman (Timothy Van Patten). Confrontation inevitably follows, and Stegman’s gang seem to be protected by an inept and broken system that allows good teachers such as Roddy McDowell’s Corrigan to hang in the breeze. Eventually, Stegman goes too far and him and his cronies gang rape Norris’ wife (Merrie Lynn Ross), stab nerdy student Arthur (a young Michael J. Fox), and force Norris to go all Death Wish on them.

This film is a lot of trashy fun. The actors are all on great form- with Van Patten’s turn as the lunatic being hilarious for the most part. McDowell, in particular, is brilliant as the alcoholic teacher on the brink, and the scene where he snaps and teaches his biology class at gunpoint is fucking hilarious. King is good as Norris, and he struggles manfully to overcome a credibility gap in the film where half the problems arise because he has no support, and when he wails that the Principal always seems to take Stegman’s word over his, I did feel he had a point. I work in Education and I can tell you first-hand that there is no way in fuck that Stegman wouldn’t have been expelled, simply because schools can exclude on very tenuous grounds, such as being a disruption, and the school certainly has more than enough to meet the minimum criteria to sling his ass out the door. Michael J. Fox is surprisingly good here- you can certainly see how he managed to go from this and in less than three years hit the quality double of Teen Wolf (coming in this series) and Back to the Future. I’m  not used to seeing him play nerdy roles (McFly isn’t a nerd), but here he does do a good job. 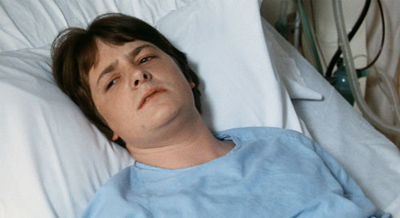 There are so many entertaining individual scenes here. The sequence with the flagpole is priceless being that glorious combination of ridiculously dim and hilariously entertaining. Furthermore, the best scene of the film is the confrontation between Norris and Stegman in the washroom, where Stegman accuses Norris of not having the guts to punch him out and proceeds to demonstrate this by smashing his own face off the mirror, sink, hand dryer and wall. Van Patten is clearly having a blast, and plays this with a demented grin on his face. I totally believe that Stegman is a psychotic and while this has been done in many other films, I can’t think of it being as effectively performed as it is here.

Finally, when Norris does go nuts and takes down the gang it is really exciting and furthermore features one of the dumbest deaths in cinematic history. I won’t spoil it, but, really, it is laugh out loud funny. The problem with the payback scenes is that Lester shot them in almost pitch black, and furthermore, they feel heavily contrived: Norris takes down the gang one by one- they almost form an orderly queue for him to kill them in entertaining ways. I don’t believe that any gang would be dumb enough to check out like this.

The music here is performed by Alice Cooper, which is, I have to say, a bit of an unimaginative choice given that Alice performed School’s Out (which thankfully didn’t appear on the soundtrack), but needless to say is quite fitting to the content of the film. Lester clearly had a vision of what he wanted to achieve, and has obviously meticulously assembled all component parts to meet this vision. He’s done a fine job here, for the most part, and although the film does wander down the “seriously unpleasant” road on more than one occasion, he keeps it light enough that I was never nauseated enough to turn it off. I’m pretty sure that there is meant to be social commentary here, but the film plays out as exploitation, so if Lester did intend it as satire, it hasn’t worked and what we’re left with is an almost fascistic wet dream about Teacher being able to get violent with unruly pupils. That the message is lost beneath the noise and violence on screen, and this may explain why he came back to this subject with Class of 1999, even if that version is Sci-fi nonsense with Robots. 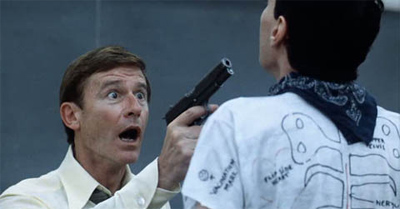 Overall, this is good fun. Mrs. Jarv treated it with utter disdain describing it variously as being “dumber than a pet rock”, “completely unbelievable” and “Oh my god that’s fucking hilarious”, which is a fairly accurate take on the film. For my part, I enjoyed it a lot more than her, but then I’m more disposed to like films like this than she is. I do recommend it as a slice of dumbhouse, and I’m almost positive that beer facilitated the enjoyment process for me. However, as a scathing critique of the collapse of society and the diminishing ability of teachers to control their classes Class of 1984 is a pretty abject failure. Nevertheless, though, it is a hugely entertaining one and one that I really did take a lot of pleasure out of. I give it 3 apples for the teacher out of 4.

Next up is another fucking stinker: 1983’s hideously ugly and boring Barbarian animation Fire and Ice. The series starts to get rockier for me from that one in, being followed by nauseating pro-IRA Romance Cal. Cal, in case you haven’t guessed, went down like a cup of cold sick with me. 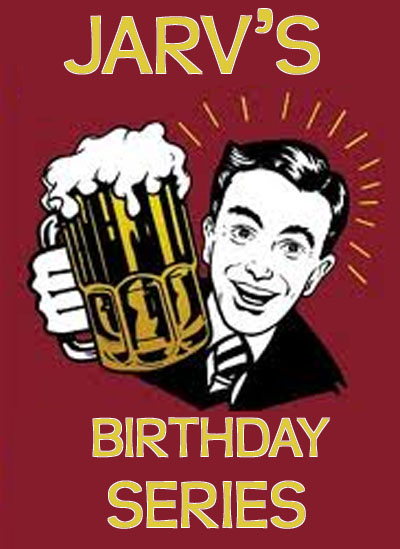